A Most Beautiful Thing

I returned to Mary Mazzio’s “A Most Beautiful Thing” with serious trepidation. After all, March 2020, the month in which this film was scheduled to premiere at the South by Southwest Film Festival before a nationwide rollout, feels like a lifetime ago. Not only has the pandemic changed the way we interact in the months since, but it has amplified class and racial inequality in ways that the filmmakers never could have expected. It’s hard to look at this story of how difficult it is to live on the West Side of Chicago and not think about how poorer communities have been hit harder by COVID-19. And then factor in how the curtain of police violence and racial privilege was ripped away with the murder of George Floyd, or the incredible murder rate in Chicago this summer (including an unheard-of number of deaths of children in this city)—I wasn't sure the time was right for a movie about a Black rowing team in the Windy City, especially one that reached out to white police officers and rowed with them in the film’s final act.

Watching it four months later, the documentary feels like an elegy for communities that have been divided by disease and violence. And yet its humanity and optimism remain powerful. If anything, there’s something more to the “peace” that these men repeatedly say they found on the water. Peace may be harder to find this summer than we could have ever imagined, but it’s still a primal human need.

“A Most Beautiful Thing” is the story of the Manley High rowing team, a group of young Black men from the West Side of Chicago who became unexpected best friends on the water. Coming almost entirely from broken homes, including multiple cases in which mothers were addicted to drugs and fathers were absent, these men were prime candidates for gang life. More than once, they mention how easy and expected it is to join a gang on the West Side of Chicago. You’ll die if you don’t. They were led by the charismatic Arshay Cooper, who really could carry a documentary of his own. Inspired by the new family he found on the team, he became an entrepreneur, a mentor, and a community leader. Mazzio weaves a lot of stories through her film, but Cooper is really the throughline, the man who wrote a book about his experience on the team and reunited it after the death of one of their coaches, leading to the event that saw men who grew up harassed by the police rowing with white officers.

Mazzio places the story of the Manley rowing team in the context of their backgrounds, with brief stories about their lives and even broader details about how people growing up in gang-influenced communities have worse PTSD rates than soldiers that serve in combat, a number that has to have risen in 2020. Think about the last four months. What will 2020 do to our youth? It’s a haunting question that isn’t being asked enough. When one of the rowers said, “When they shut down the YMCAs, I went to the streets,” it reminded me how under-reported the story is regarding how the pandemic, and its resulting closures of safe spaces, is one of the main reasons for the increase in violence this summer.

Clearly, there’s a lot going on in “A Most Beautiful Thing,” but Mazzio succeeds by always keeping her focus on her engaging subjects. Arshay isn’t the only charismatic leader on this team. All of the young men, many with kids of their own now, are open and honest about their backgrounds and how this one change in their trajectory altered everything going forward. There’s a compassionate and deeply humanistic approach to Mazzio’s filmmaking. “A Most Beautiful Thing” is filled with smiles and laughs, which may sound like a simplistic thing to consider but is much harder than it looks on the surface. Common may do the narrating but Mazzio lets her subjects tell the story. She turns it over to them in every way, much like their coaches allowed them to row the boat themselves. And they do so together beautifully.

Some of the approach here is a bit blunt in terms of swelling music choices and over-editing, but the best compliment that I can pay “A Most Beautiful Thing” is in how much it reminds me of Steve James’ films about his favorite city in the world. James is our most empathetic documentarian, a man who can bring out the stories in people who would never consider themselves worthy of a feature film. Like James, Mazzio understands how to give people space to express their joy and fear in equal measure, and her honest interest in Arshay Cooper and his best friends comes through in every frame.

Life has changed for Mazzio, Cooper, and everyone else involved in “A Most Beautiful Thing” since its canceled premiere in March, and some will respond differently than they would have four months ago to scenes of the team reaching out and trying to destigmatize police officers. And yet there’s hope in this film that resonates. It’s not suggesting that one event like the original Manley rowing team or even the Chicago Sprints event with the Chicago Police Department has the power to change the world, but that these moments have the power to influence subsequent choices and opinions. Like the ripples from an oar, moving gently across the water.

Note: Chaz Ebert was an Executive Producer on this film but had no influence on this review.

“A Most Beautiful Thing” will be available on Comcast/Xfinity on July 31, Peacock on September 1, and Amazon Prime later this Fall. 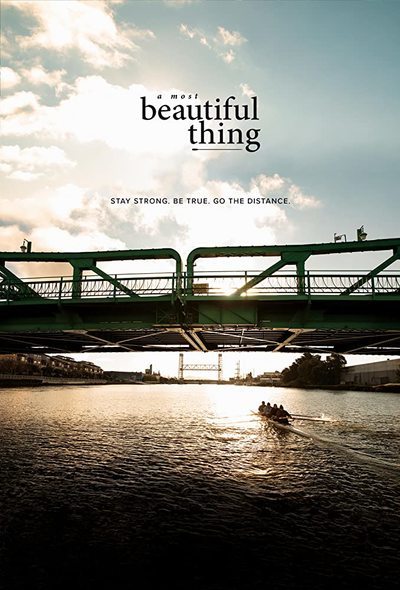