Casey Wilder Mott’s modern take on William Shakespeare’s “A Midsummer Night’s Dream” is comprised of roughly a million impure creative choices, but the most telling might be what he does to poor Nick Bottom. In the Bard’s play, the comic relief character is eventually given the head of a donkey. In this modern version, Bottom’s face becomes an actual ass, as in, a bottom. You get the idea.

But it’s these inspired, fully-amused choices that give the movie a sensation that’s often missing from Shakespeare movies, whether they’re of modern setting or strictly of the period—a full-out playfulness. If you’re hoping to see a production just like the one that would have been done in 1596, this ain’t it. But Mott’s version is a hell of a good time in its own right.

Shakespeare’s story of potions and potent feelings is imagined here as an L.A. story, but the usual cynicism towards the more superficial people there is limited to playful teasing. Worry not: the Shakespearean text is the same, and it’s still set in Athens, with the Hollywood sign replaced to say “Athens,” one of the many details when the movie introduces its players as if it were mini movie trailer.

In this world, Hermia (Rachel Leigh Cook) is a Hollywood star who goes by the name of H-Pup on tabloid covers. Her friend, Helena (Lily Rabe), is a Venice Beach hipster who participates in poetry readings, while pining after financial bro Demetrius (Finn Wittrock), who doesn’t share the same feelings and wants Hermia. At the same time, though Hermia’s father Egeus (Alan Blumenfeld) wants her to wed Demetrius, she’s more fond of Lysander, played by Hamish Linklater as a bit of a space-shot, but lovable all the same.

All of this leads tension leads everyone outside of Athens and into the woods, where king fairy Oberon (Saul Williams) helps orchestrate the dispensing of a secret love potion, made by the self-amusing Puck (Avan Jogia). In the process, a film crew, lead by a director named Quince (Charity Wakefield) are frightened when peppy actor named Bottom (Fran Kranz) has his aforementioned transformation. Not long after, the queen of the fairies Titania (Mia Doi Todd) is smitten with Bottom. It all makes for one doozy of a wedding party story, as we see at the end.

It's a massive story, but Mott and his crew are able to coat everything with a special zeal. They embrace the story as an opportunity for composed shots and surprising edits; this is a truly visual comedy, one that I imagine could work just as well if one dared put it on mute. Mott's film truly pops for the most part, and maintains a great energy when not stuck on the dialogue, a tricky place the script can find itself when it’s just characters standing around the woods. But Mott is clearly high on the same supply as Baz Luhrmann’s “Romeo + Juliet,” of which Mott's film is a worthy companion. (Joss Whedon’s own “Much Ado About Nothing,” a small project inspired by his personal Shakespeare book club, further fades from memory.)

“A Midsummer Night’s Dream” has the flavor of a movie that was made to be loved by people of a very specific inclination; it’s highly aware of its fellow geeks in the audience. If you don’t know the line “Out, damned spot,” you might wonder why there’s a random brief moment where Theseus is yelling at a dog, named Spot, to get off his chair. But that’s just one of the funny little gems here that make this film delightful.

Luckily, those people who would love a movie like this feel to be in the cast, further adding to the infectious nature of this adaptation’s giddiness. Their line-reading is straight, but their hamminess is calibrated; they relish the larger-than-production idea of these characters, born again as lively archetypes. Even Bottom, his ass-face not withstanding, gets a finale-stealing sequence in which the final act production of his dream from the woods is like a hilariously bad internet video, made of bad green screens and even worse editing, like Shakespeare doing Tommy Wiseau’s “The Room.”

More than other Shakespeare adaptations from the past couple decades, “A Midsummer Night’s Dream” reminded me of that classic Gene Siskel qualifier: “Is this film more interesting than a documentary of the same actors having lunch?” Well, this movie is that gathering; it is that casual, intellectual, mirthful meal. Shakespeare’s prose is just one part of the feast. 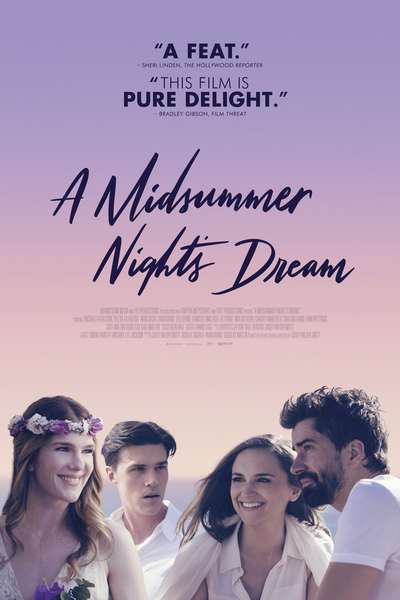