A Futile and Stupid Gesture

The good men and women of the National Lampoon changed comedy forever. The impact of their magazine and movies like “Animal House” and “Caddyshack” can undeniably be felt in almost all modern comedy, but certainly in the quirky style of writer/actor/director David Wain. One of the members of “The State” and the team behind “Wet Hot American Summer,” Wain has always operated under the “comedy ensemble” concept of filmmaking and TV, bringing together the same performers over and over again, often skewering expectations of the genre, as in his spoof of rom-coms, the underrated “They Came Together.” Could he be too good a fit for the story of National Lampoon? Does this explain why “A Futile & Stupid Gesture,” while being full of likable and funny people isn’t all that funny or likable? Because it's too much like telling your own story? While there’s a bit of hero worship going on that deflates the piece, and Wain’s direction is surprisingly uninspired, the biggest problem is the script that tries to cover too much ground but doesn’t really have that much to say as it does so.

There’s a scene in this film about the rise of National Lampoon that sums it up in ways that writers John Aboud and Michael Colton certainly didn’t intend. The writers are sitting around throwing out ideas when Tony Hendra (Matt Lucas) drops a dull idea—drawing Nixon with Pinocchio’s nose. For some reason, this bad joke that nearly got Hendra run out of the room kept coming back to me. Just as it’s an obvious way to convey a message—Nixon is a liar—too much of “A Futile & Stupid Gesture” takes a similarly predictable route to gets its history across. The story of Doug Kenney and the ascendance of National Lampoon is told primarily through narration and montage. It’s a Greatest Hits collection, hitting the beats that anyone who saw “Drunk Stoned Brilliant Dead” already knows, and doing so incredibly superficially. The best thing about Wain’s film is the casting, including one brilliant piece of meta analysis, but that only gets a movie so far.

Will Forte plays Kenney, who took the Harvard Lampoon that they helped through one of its most successful phases and turned it into an international phenomenon with his best buddy, Henry Beard (Domhnall Gleeson, giving the most grounded and interesting performance in the film despite an awful wig.) When they get to New York and found the magazine, the film rushes through a decade or so of history from the first days of groundbreaking comedy through the movies and up to Kenney’s death in 1980. We meet tons of the major comedians from the era including Gilda Radner (Jackie Tohn), Bill Murray (Jon Daly), John Landis (Brian Huskey), John Belushi (John Gemberling), Christopher Guest (Seth Green), and the one and only Chevy Chase, played by his “Community” co-star Joel McHale, with whom he had a notoriously contentious on-set relationship. Imagine playing one of your least favorite co-workers in a film. McHale doesn’t go for parody, nailing Chase’s rhythms and comedic timing, although it’s telling that Chase is portrayed here is something of an enabler for his best buddy when it comes to drugs.

Martin Mull plays an older version of Doug Kenney, which is itself a slightly crazy framing choice given that Kenney died when he was 36. So is Mull playing Kenney from the afterlife? The truth is that it’s a lazy narrative choice, allowing Kenney to comment on his own story from afar, although it would have been just as effective to have Forte do these fourth-wall breaks. It’s almost like someone just wanted to get Mull in the movie and the other parts were taken. The emphasis on Kenney is particularly frustrating narratively in that this is way more his story than that of Lampoon. Of course, Kenney is a breakthrough voice in comedy, but there’s a more balanced version of this story that’s way more interesting.

Worst of all, “A Futile and Stupid Gesture” can’t keep its irreverent, NL-inspired tone throughout, and Wain can’t quite handle the serious stuff—one gets the impression he’d much rather be hanging out in the writer’s room or behind-the-scenes of the radio show than dealing with Kenney’s drug addiction and infidelities. The superficial reimagining of comedy highlights is kinda fun in a “The Chris Farley Show” kind of way (“Remember that food fight? That was awesome.”) but that tone definitely doesn’t work when the film has to be even remotely serious. At one point, Kenney says “Comedy doesn’t have to be pretty. It should be fucking raw.” In the way it handles both comedy and misery, I wish this movie was too. 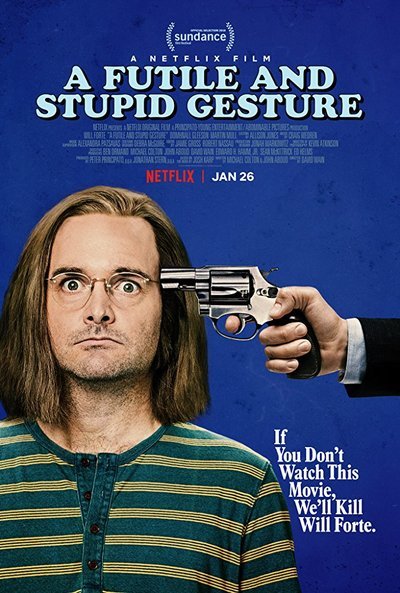 Will Forte as Douglas Kenney