An opening credit in “A Five Star Life” informs that the film was made “with the support of the Leading Hotels of the World.” According to Wikipedia, this is the largest collection of luxury hotels in the world, and they are routinely inspected to ensure they maintain the highest standards. Since this is a film about a hotel inspector, I expected a kids-glove treatment of whatever institution was gracious enough to allow filming. Instead, the inspector in question, Irene (Margherita Buy), never fails to find something wrong at each of the hotels she visited. Yet the hotels are so drop-dead gorgeous that viewers will want to visit them anyway. This proves that there is no such thing as bad publicity.

The stars in "A Five Star Life" refer to the rating system given to hotels across the world. A “five-star” hotel is the height of luxury, an unparalleled travel experience. To test this, Irene shows up as “the mystery guest,” inspects the hotel and reports any findings to the hotel manager. If there are too many negative answers to the questions Irene clicks in her laptop, the hotel’s rating is in jeopardy.

To guarantee that the best service is provided during the inspection, the hotels try to determine who the inspector is. In an amusing jab at gender expectations, director and co-screenwriter Maria Sole Tognazzi shows a waiter pointing out to Irene the supposed “mystery guest.” It’s a man with a huge cigar being treated like royalty while Irene has to wait extra time for service. You know what rating Irene’s giving this hotel.

“A Five Star Life” shows something not often seen in American cinema, at least in films that aren’t police procedurals: It shows an ordinary citizen doing her job. The screenplay nimbly works in other characters, such as when Irene recruits her two nieces to help her test how a hotel treats families. But a large part of “A Five Star Life” is simply Irene doing her job while dealing with the pitfalls of the career lifestyle she has chosen. The geographical and architectural eye-candy, and the constant flow of information on how the job is done, should keep viewers interested. It’s a blessing when a movie teaches you something.

There was one lesson “A Five Star Life” seemed in jeopardy of teaching, and the fear that it would be taught speaks to how we as viewers are conditioned by Hollywood movies. Irene’s sister Silvia (Fabrizia Sacchi) points out that the fortysomething Irene has no husband and no children. This is not unusual for someone who spends 90% of the year traveling to luxury hotels. Irene loves her job—she’s not running from anything nor has she any psychological baggage—but Silvia keeps playing the “no man and no kids” card. As Irene looks at her sister’s somewhat dysfunctional family, it appeared that she would “learn” her life was incomplete without a man and some rugrats.

Irene’s best friend, Andrea (Stefano Accorsi), looks like the obvious choice for her walk into the sunset at film’s end. Their relationship is intriguingly vague for the first half of “A Five Star Life,” before it’s revealed that he was a former lover. Andrea seeks Irene’s advice when he accidentally impregnates Fabiana (Alessia Barela). Fabiana wants to keep the baby, with or without Andrea’s assistance. While this development should eliminate an ending where he convinces Irene to quit her job for a more fulfilling life with him, stranger things have happened in movies.

Eventually, “A Five Star Life” has to play out the moment where Irene questions whether Silvia is right about her status. Predictably, it comes after a tragic event shakes her. Not so predictable is how the film gets there. The great Lesley Manville, veteran of several Mike Leigh movies, shows up at a Berlin “Leading Hotel of the World” to engage Irene in friendly banter and discussion. Manville’s character, Kate Sherman, has written a book about hypersexuality, gender issues and porn. Sherman’s televised book discussion talks about the loss of intimacy, which starts the windmills in Irene’s mind turning. This entire subplot is completely out of left field, but Manville is so convincing and interesting that it’s less cumbersome than it sounds.

Director Tognazzi gets a great performance out of Buy. She is onscreen for the majority of “A Five Star Life,” constantly doing her job even when she’s not working. Buy adheres to the compulsiveness of one who lives for the work, and it’s fun to watch her notice things that she can’t wait to report. There’s a feeling of viewer satisfaction when she rips a hotel manager for his hotel’s snobbish treatment of a young newlywed couple on their first trip to a luxury hotel. The poor couple’s fear of appearing unrefined is so palpable that Irene feels protective of them, a small note of empathy despite her mechanical commitment to the job.

Buy also fares well with her co-stars. She gives off an aunty vibe around her nieces, a sisterly tension around Silvia and a strong urge to keep things platonic around Andrea. The actors complement her nicely, and the film refreshingly allows the viewer to figure details and relationships out as the plot unfolds.

I’ll not spoil whether “A Five Star Life” surrenders to a Hollywood “you need a man!” ending, but I will say that Irene is in charge of her big decision, and you may or may not be satisfied. It’s a bit cheeky to say “your mileage may vary” in regard to a movie about travel. Your enjoyment will depend on how much you relate to Irene and the job that she does, and whether you like gorgeous hotels and globetrotting from one European city to another. I enjoyed the trip. 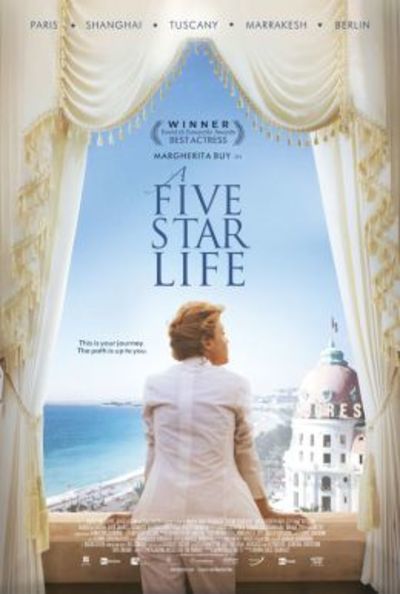