"A Family Man" is one of those films where a fast-talking forty-something upper-middle class husband and father who works too much and doesn't appreciate the simple things in life endures a catastrophic twist of fate and changes his tune. There are a few excellent films that tell that story, a number of watchable but forgettable ones, and so many bad ones that we'd better not start listing them here because we might not know where to stop. To greater or lesser degrees, even the better examples of this sort of movie can feel like veiled apologies by hard-driving Hollywood types (or the money folks who bankroll their work) for spending too much time on the set, in the studio boardroom, at the strip club, or whatever. They all ultimately rise or fall on the basis of their artistry. The less artistry there is, the more phony and self-serving the movie seems.

This one, directed by Mark Williams from a screenplay by former corporate headhunter Bill Dubuque, falls somewhere between the second and third categories. It's not great, not terrible, mostly bearable, occasionally insufferable; you might watch it all the way through if you were tucked into a blanket on a couch and weren't so thirsty, hungry or in need of a bathroom break that you felt compelled to get up. The photography is excellent; the direction is competent enough to pass muster on most cable TV dramas, and there are a number of sparkling performances in supporting roles. But the script wavers between convincing, mostly silent moments of interaction and cringe-inducing, spell-it-all-out dialogue. And the lead role of Dane Jensen has unfortunately been miscast with Gerard Butler.

Butler has only himself to blame for that last error. Seeking to prove his versatility after years of global superstardom in action blockbusters ("300," "Olympus Has Fallen" and its sequels), Butler embraced this script, used his clout to get it made, and took an executive producer credit on the finished product. A tale like that should warm the hearts of movie buffs who love it when an actor known for one kind of role blossoms in something different. The gold standard is Burt Lancaster, a brawny sex symbol in film noir, action films, war pictures and Westerns who successfully cast himself against type in dramas that he coproduced, including the classic "Sweet Smell of Success," in which he donned horn-rimmed glasses and played many of his scenes while sitting at a table in a restaurant.

Butler is no Lancaster. As Dane, he does the 1980s-'90s Michael Douglas thing, spitting out cynical, acidic monologues on telephones and in boardrooms, his swelled torso and arms straining against tight-fitting jackets and ties, then heading home to dote on his cute children, Ryan (Max Jenkins) and Laura (Julia Butters), and flirt or fight with his wife Elise (Gretchen Mol), who loves him but wishes he'd spend more time with the family he supposedly adores. Then a kind but blunt oncologist named Dr. Singh (Anupam Kher) informs the Jensens that Ryan has leukemia and might not live, and the movie shifts into a message-y melodrama that essentially combines the Ebenezer Scrooge and Bob Cratchit plots in "A Christmas Carol" and makes poor Tiny Tim the engine of change by filling the audience with fear that he'll end up as a ghost.

You've got to be astonishingly skilled, likable and convincing to put a role like this one over the top. And you absolutely have to put it over, because if the actor who's at the center of nearly every scene in a moralistic tearjerker isn't dazzling in every frame, the picture will just lie there radiating anxious boredom, like a dog that wants to go outside but can't get anyone's attention. Butler tries his best, but never strong enough to make you stop imagining what someone else could have done with the part.

He's unconvincing in nearly every scene except ones where life punches him in the gut and he has to be quiet and think about what just happened to him. He's supposed to be mesmerizingly charismatic and sly in the "Master of the Universe" scenes where he's bamboozling people, schooling eager underlings, and trying to win a cutthroat contest (Dane's boss, played by Willem Dafoe, pits him against a coworker, played by Alison Brie, with the promise that he'll promote the winner of a sales contest to the position of general manager). But this material, which might've been appallingly exciting if played by Douglas or Denzel Washington or Robert Downey, Jr. or someone else with devilish charm, never sparks to life because Butler too often comes across as domineering and self-involved, like one of those motormouthed meatheads you'd try to avoid talking to at a party. He has two default expressions, a determined scowl and a furrowed-brow "Oh, my gosh, what does this mean?" Mol partly humanizes Butler in the domestic scenes—almost heroically, considering what a nothing part she's been handed; this is the kind of suffering wife role where an actress has to say "Even when you're here, you're not really here"—but there's only so much that she, Dafoe, and the rest of the cast can do.

There are a few intelligent, sincere, even wrenching scenes in "A Family Man," in particular the moment where Elise accuses her husband of wanting to prolong the life of a child who might not make it because he feels guilty about not having been around more. (That sort of accusation hits so close to the bone that it might make some parents in the audience shudder.) There are other, less dire scenes that also ring true, like the one where Dane pronounces himself "a goddamn American hero" for working late all the time and Elise laughs in his face and makes him laugh, too. Better still is the scene where Dr. Singh entertains theological questions from his young patient, who has suddenly and understandably become obsessed with God and the afterlife: the doctor tells Ryan that over the decades he's become convinced that "all religions are some version of 'what goes around comes around.'"

That's true, for the most part. And yet, like too many exchanges in "A Family Man," it also privileges its hero's moral growth over every other story that it tells, and ultimately makes them all seems like extensions of Dane's struggle. Is God punishing Dane's arrogance by making his son sick? When he struggles to find a cure or a better treatment for his son, or simply to ease the boy's suffering, or when he goes the extra kilometer to help a 59-year old, hard-to-employ client (Alfred Molina, excellent as usual), is he doing penance? If he is doing penance, does that mean that if either or both stories—or other stories related to Dane—end happily, that God or the Fates or the universe are rewarding Dane for becoming a better person? If Dane's son dies, or if his client doesn't get that job, or if his wife divorces him, does that mean he deserves whatever misery befell him because he spent so much time at the office?

These are not questions the film seems too interested in exploring, and maybe it's better off for not trying. That kind of introspective philosophizing tends to lead a film toward ambiguity and open-ended storytelling, toward contradiction and complexity, sometimes towards audience frustration. None of those things would seem to be in the filmmakers' wheelhouses, or even in their temperaments. Whenever the movie reaches for poetry it lands somewhere in a chain drugstore's greeting card aisle, trying to choose between one that shows an adorable child laughing in a Photoshopped field of sunlit daisies, one that tries for gallows humor but isn't really that funny, and a third with a quote about mortality and wisdom only seems thoughtful because it's written in cursive. 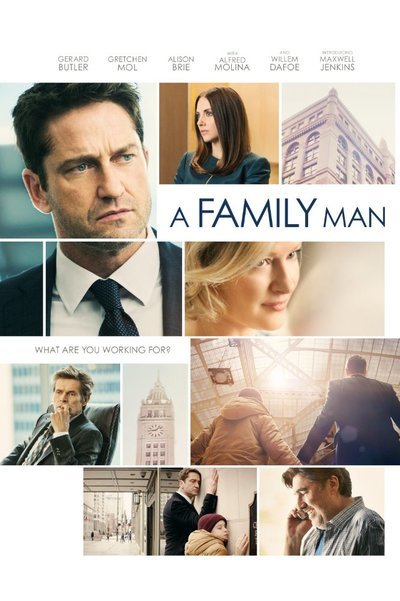