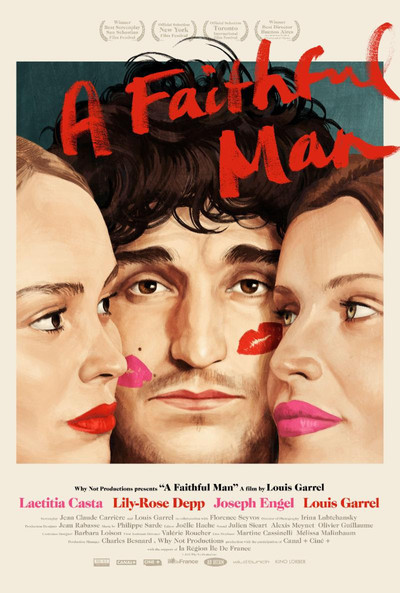 Louis Garrel was introduced to U.S. moviegoers (for all intents and purposes) as the male half of impossibly attractive, skirting-with-incestuous bisexual twins in Bernardo Bertolucci’s 2003 “The Dreamers.” (The female half was played by Eva Green.) He hasn’t pursued much in the way of a full international profile since (although he will appear in Greta Gerwig’s upcoming “Little Women”) but has nonetheless established a solid rep as one of French cinema’s more sultry leading men.

Albeit one with often adventurous taste in roles. And he’s also a French cinema legacy. His grandfather was the actor Maurice Garrel, and his father, Philippe Garrel, is a director and sometimes actor whose moody, often despairing romantic dramas pinpoint the malaises of the children of ’68 with unsparing melancholy acuity. In recent years, father Garrel has used Louis in several notable films, including the epic 2005 “Regular Lovers” (in itself a fascinating “answer film” to “The Dreamers”).

Recently, Garrel turned to directing, first with 2015’s “Two Friends,” inspired by a play by Alfred de Musset, and now with “A Faithful Man,” which Garrel cowrote with Jean-Claude Carriere, the redoubtable longtime screenwriter who assisted Luis Buñuel in his magnificent '60s-'70s run of films. One would not be blamed for wondering to what extent Garrel fils is a chip off the old and frequently depressive pere.

The answer is yes and no. “A Faithful Man” begins the way many a Phillippe film does: with a little bit of voiceover and then a dialogue in a Paris apartment of a soon to be unhappy couple. “Got a sec?” Marianne (Laetitia Casta, who’s married to Garrel in real life) asks Abel (Garrel). The hapless Abel says sure, and she proceeds to inform him that she’s pregnant … and that he’s not the father…and that the father is a mutual friend … and that she’d like Abel out of the house in ten days so she can marry the guy.

This is all said very quietly and all civilized-like, but one doesn’t sense a contradiction when Abel characterizes the exchange as “brutal.” The French, they’re like that. And this scene, with its understated acting, attractive but unfussy lensing (by Irene Lubtchansky, a longtime collaborator with Jacques Rivette), and incipient cloud of gloom suggests that Garrel could run with his father’s torch if he wanted to.

But wait. What “A Faithful Man” soon shows itself as is a sly romantic comedy. Eight years pass, and a scruffier Abel learns that Paul, the mutual friend, has died in his sleep and left Marianne a widow. Marianne’s got a precocious eight-year-old child, Joseph (Joseph Engel, funny and a little scary) who’s keen on police procedurals and soon wants to convince Abel that Marianne poisoned her late husband. The late husband’s sister, Eve (Lily-Rose Depp) has been crushing on Abel since she was a kid. She sees his renewed presence in her circle as a chance to stake a claim.

This make for a peculiar thicket of a love quadrangle, to be sure. But Garrel disposes of it in a brisk 75 minutes. He shows genuine springy inventiveness as a director, particularly with respect to Eve’s sometimes self-correcting flashbacks.

Casta and Garrel generate wary warmth as a couple rediscovering each other, while Depp and Engel provide the comedic ballast. Depp often puts on a facial expression that doesn’t suggest space cadet so much as it does full-fledged extraterrestrial, while young Engel give his character a credible assurance, depicting him accurately guessing the killer at a family outing to the local rep cinema to check out “The Strange Love of Martha Ivers.” The music score by veteran composer Philippe Sarde, who also scored “Two Friends,” is pleasantly melodic and ever so slightly lush, lending the movie a splendid little accent.