A Bag of Marbles

There was a time in which films set during the Holocaust were made with the expressed intention of keeping history alive for future generations. For my junior high history class, I analyzed three movies that observed the impact of Nazi atrocities from strikingly different perspectives—the encroaching dread of a family in hiding in George Stevens’ “The Diary of Anne Frank,” the visceral horrors of a concentration camp in Steven Spielberg’s “Schindler’s List” and the monstrous denial of Nazi judges on trial in Stanley Kramer’s “Judgment at Nuremberg.” As a kid, this unofficial trilogy served as a sobering illustration of the unthinkable evil committed by ordinary human beings when their minds are warped by intolerance. Spielberg’s film has routinely been criticized for choosing to focus on those who survived rather than perished, yet it was always the senseless slaughter—depicted with newsreel-level realism by Janusz Kaminski’s camera—that remained unforgettably etched in my memory. What cinema once strived to remind us has now become impossible to forget, as Nazism has received newfound empowerment from politicians whose careers have been built on the stoking of fear and hatred in voters. Holocaust films were always educating us about our past as well as our present, and that truth has perhaps never been more apparent than in the months following last August’s white supremacist rally in Charlottesville.

The great value of Christian Duguay’s “A Bag of Marbles” is the degree to which it makes such a barbaric and bewildering chapter in human history comprehensible for young audiences. Yes, the film recounts a real-life tale of survival, but the fate of its lead protagonists in no way diminishes the grueling hardships they face on every step of their journey. Based on the 1973 memoir of the same name by Joseph Joffo, which was previously adapted for the screen by Jacques Doillon shortly after its publication, this film aims to construct, in Joffo’s own words, a more “honest” portrayal of the author’s experiences as a Jewish youth in occupied France. This isn’t the sort of somber, slow-paced dirge guaranteed to make students fall asleep in a dimly lit classroom. I imagine junior high-age kids will be wholly absorbed by every moment of this two-hour picture, which is wrenching and scary when it needs to be, yet also contains stretches of whimsy that are earned rather than forced. The vast majority of scenes are viewed from the perspective of 10-year-old Joseph (Dorian Le Clech), who must flee from his home in Paris in order to reach a “free zone” in Nice, while accompanied by his 12-year-old brother, Maurice (Batyste Fleurial). Duguay and his screenwriters allow these characters to behave like actual children instead of miniature adults, even as they’re forced to grow up much faster than they would’ve preferred. Humor and wonder will often sneak into our lives when we least expect them to materialize, and as Joseph and Maurice embark on their arduous journey, they embrace any opportunity to distract themselves from the harsh reality of their plight, whether it be frolicking in a sun-drenched field or toying with one another in brotherly fashion. Adding immeasurably to the film’s tone is composer Armand Amar, who previously scored “Belle & Sebastian,” another family film about a child outwitting Nazis.

As the boys first set out on their escape from Paris, there is a sweeping effects shot of a train chugging along a bridge, as the camera closes in on Joseph’s face framed in the window. The shot is quite similar to the one in “Harry Potter and the Prisoner of Azkaban,” which occurs just before the titular hero encounters a Nazi-esque Dementor on his Hogwarts-bound train. Other touches are positively Spielbergian, from the faceless men wielding predatory beams of light in a forest to the heroic American planes viewed from a rooftop, signaling the impending liberation of our protagonists. This joyous image was viewed from an even more glorified angle in Spielberg’s “Empire of the Sun,” another fact-based account of a boy’s survival amidst occupying forces—in his case, that of the Japanese—during WWII. Just as the debut performance of 13-year-old Christian Bale served as the emotional anchor of “Empire,” so does the wonderful work of newcomer Le Clech for this film. Not once does his acting strain to tug at the heartstrings with shameless sentimentality. When tears start to form in his eyes, he often struggles to contain them, such as when his father, Roman (Patrick Bruel), resorts to bruising methods in order to teach his boys a crucial lesson. Having survived anti-Jewish pogroms in Russia at a young age, Roman knows that his children must be equipped to deal with pain so that they won’t be killed in order to avoid being hurt later. To prepare Joseph for Nazi interrogations, he slaps him repeatedly while demanding to know whether the boy is Jewish. This act of performance is no less improvisational or necessary as the moment when Roman’s wife, Anna (Elsa Zylberstein), talks her family out of a tight corner by taking offense to a Nazi’s claim that she was playing Jewish music on her violin.

Bruel may initially seem rather aloof as Joseph’s father, yet the coolness of his demeanor is fueled by his need to put on a strong face for his family. Two of his scenes are among the most deeply moving in the picture, the first being when Roman is faced with leaving his boys for another prolonged period of time. Only when turning away from his children does he allow his face to collapse in despair. Equally indelible is the shot of Roman sitting in the back of a car as Joseph and Maurice sleep on either side of him, resting their heads on his shoulders. Everything about this shot is hauntingly bittersweet, as the father savors this isolated moment of peace before the world intrudes on them again. Like its characters, “A Bag of Marbles” is perpetually on the move, running from one location to the next as the brothers must rely on the kindness of strangers while simultaneously keeping their guard up. It’s to the film’s credit that many of these side characters come off as vividly realized people in their own right, including the SS chief who develops an obsession with the boys and the two good Christian men who protect the children as if they were their own kin. Editor Olivier Gajan has a background in music videos, and there were some occasions where I wished he had held on a shot for a beat longer before cutting to the next sequence. The boys’ first reunion with their parents is so abrupt and so awash in white light that I assumed it was a dream sequence, and in a sense, it is—conveying a sense of lasting tranquility that the characters will never be able to obtain together. The audience is often lulled into a sense of contentment before malevolence rears its head unexpectedly—in one case, it takes the form of silence so protracted it grows sickening. Gajan’s editing is most effective in scenes where he ups the tension with quick cuts, accentuating how every second counts for these characters, such as when the sun peers out from a cloudy sky, alerting Joseph to imminent danger he would’ve otherwise overlooked.

Over the years, some critics have debated the accuracy of Joffo’s text, insisting that the writer couldn’t possibly have remembered the events as clearly as he had written of them decades later. Even if “A Bag of Marbles” is more of a parable based in reality, that puts it in good standing among classics like “The Sound of Music,” of which it shares many a meaningful climb up vertiginous mountains. For much of its running time, Duguay’s film succeeds as a very good historical drama, but in its final act, it blossoms into a near-great one. Le Clech beautifully captures the courageous spirit of his character, who didn’t shy away from hurling a Nazi into a lamp when the man started beating on his brother. Rather than cry for his mommy, Joseph is often heard uttering the indignant refrain, “I’m so sick of this.” As swastika-bearing flags are finally torn down from France and Nazi collaborators are pummeled in the streets, Joseph makes a decision so pure and heartfelt that it had me applauding. It’s a moment that echoes a slight of hand administered by his father at the film’s opening, which he performed as a way of tricking Nazis into acknowledging the humanity in people they supposedly reviled. Joseph’s selfless act at the end of this movie embodies a long-held belief I’ve had that has been continuously affirmed by modern day heroes such as Malala Yousafzai, Emma González and Sonita Alizadeh. If I am certain about anything these days, it’s that young people speaking their truth will be our salvation. 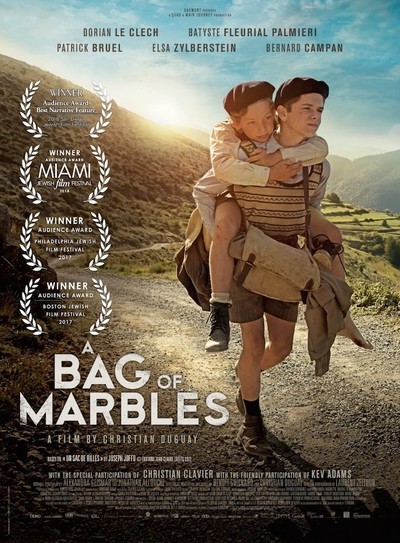