For a film called “90 Minutes in Heaven,” this adaptation of Don Piper’s 2004 bestselling memoir spends an inordinate amount of time on earthly ground. Only about three minutes of the film are devoted to portraying the divine afterlife, and when they finally arrive, they aren’t worth the wait. A better title would’ve likely been “121 Minutes in Purgatory,” since that’s essentially where audiences will find themselves residing during the entirety of this dreary slog down a familiar road paved with painfully good intentions.

What’s especially dispiriting is the botched potential of the film’s premise. Here’s a story about a Baptist minister who dies in a horrific car accident, has a transformative trip to the Pearly Gates and suddenly finds himself brought back to life, reciting the lyrics of a hymn sung by a minister to his bloodied corpse. So taken was Piper with his vision of Heaven that he began to lack the motivation necessary to continue on his path toward recovery. He grew distant from his family and friends, repelling the very acts of kindness that he used to administer on a daily basis to those in need.

The role of Piper requires an actor that can involve the audience in his emotional struggle, all the while being confined to a hospital bed. Casting Hayden Christensen is the film’s first fatal misstep. Once again mistaking pouting expressions and mumbled line delivery for a vivid characterization, as he did so notoriously as Anakin Skywalker, Christensen is an infuriating presence from frame one. There’s a reason why the actor’s best film remains “Shattered Glass,” Billy’s Ray’s excellent 2003 profile of a deceitful journalist: the actor is most convincing as a phony. It’s much harder for him to make sincerity credible, which is a major problem in this case, since his character is the one tasked with repeatedly declaring, “Heaven is real!”

If that line sounds familiar, it may be because it bears a suspicious resemblance to the title of last year’s highest-grossing evangelical release, “Heaven Is For Real,” a film that is superior on every conceivable level. That picture also recounted the fact-based tale of a near-death experience, yet it actually dealt with the spiritual crises and doubts that arose in its aftermath. “90 Minutes in Heaven” seems to take for granted the notion that audiences will buy Piper’s story, and thus exerts no effort to make it convincing, let alone interesting.

Think of the limitless possibilities that the visual medium of cinema could’ve provided to these filmmakers seeking to depict the awe-inspiring sights Piper encountered after his soul left his body. Aside from widening the aspect ratio, all writer/director Michael Polish—a filmmaker once lauded for audacious fables like “Northfork”—can muster is sun-dappled green screen shots of cheery caucasians dressed in their Sunday best. There are also two black women and an Asian man among the smiling faces, but they’re merely glorified extras on hand for the celestial photo op.

Another problem is the dialogue. Piper’s narration has a tendency to introduce every character upon their arrival with expository details of their godly virtues (such as military service), even if they have no bearing on the plot. He also brings unwelcome attention to the film’s obvious metaphors by literally spelling them out via voice-over. After a brief spat with his wife, Eva (Kate Bosworth), she gazes forlornly at fireworks exploding out his hospital window. “Unfortunately,” Don moans, “these were the only fireworks left in our marriage.”

To Bosworth’s credit, she emerges as the sole emotional anchor of the piece, as Eva’s mounting frustration with her husband’s morose unresponsiveness reaches its breaking point. Bosworth fares well in scenes where Eva is simply reacting to the sort of stresses any full-time caregiver will find relatable. There’s a terrific moment where she finds herself, yet again, in a McDonald’s drive-thru and can’t bring herself to order another meal. She rolls up her window and screams in frustration, yet Polish undercuts the tension with a cheap laugh, having the drive-thru clerk quip, “Sorry, that’s not on the menu.”

One of the primary challenges facing a faith-based film like “90 Minutes in Heaven” is its reliance on the power of prayer as a deus ex machina. What may seem miraculous in real life can often come across as lazy screenwriting on film. There’s one key instance in this picture where prayer leads to a red herring rather than salvation. After praying for a sign that will aid her husband, Eva spots a billboard advertising a personal injury attorney, played by Dwight Yoakam in a thoroughly obnoxious cameo. He meets with her at the hospital cafeteria, where they sit in front of an enormous mural displaying mountains and grassy meadows. With his ten-gallon hat, Yoakam looks like a Hollywood cowboy in front of a matte painting in these scenes, which carry traces of the visual flair that once distinguished Polish’s work. Needless to say, the attorney’s promises prove to be as bogus as the artificial backdrop, and Eva’s hopes are dashed. The film frankly could’ve benefited from a few more complications like this. Faith can’t be strengthened if it’s never tested. 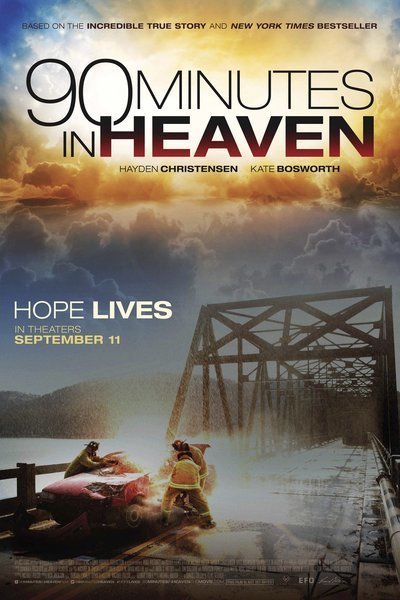