This time next year, we should have a much better idea of the NCU—the Nintendo Cinematic Universe. If you’re a fan of video games or bizarre casting news you also might have heard about the upcoming "Super Mario Bros." movie, starring Chris Pratt as Mario, and co-starring Seth Rogen as Donkey Kong. As part of this Nintendo cultural wave comes Michael Dowse's “8-Bit Christmas,” an innocent but tedious Yuletide time-killer that's all about wanting a Nintendo NES console. That’s one of many half-realized details in this sentimental piece of product placement that then weakly apes some John Hughes energy, mostly with some offhand references to Illinois culture, and a score from Joseph Trapanese that seems primed to break out into John Williams’ “Somewhere in My Memory.”

Written by Kevin Jakubowski (adapting from his book), “8-Bit Christmas” tells of how one man’s possession is his inner child’s hard-fought dream. Neil Patrick Harris is seen in the beginning of the movie showing his daughter the console he got when when he was a kid, but earned under mysterious circumstances. Harris then transitions from stiff sitcom-ready dad to pliable voice of wonder as he tells the story of the winter of '88, when he and his friends teamed up to get a Nintendo. Jake (now played by Winslow Fegley) follows different leads to try to get their own Nintendo, creating a cute premise with cute kids that just doesn’t get the comic treatment it needs. Some of them have more standout personalties than others, like Farmer (Max Malas), an infamous liar who can use his slick ways to advance their schemes (it’s funny that he has a reputation for ridiculous lies, and doesn’t even seem to know he’s doing it). Part of Jake’s attempt to get a Nintendo involves trying to charm his parents (played by Steve Zahn and June Diane Raphael with small but heartfelt performances), who remind him of how expensive the system is, and nudge him to what is more important to focus on.

“8-Bit Christmas” just isn’t for the actual original players of Nintendo, even if it has plenty of familiar growing up elements like ogreish bullies, Boy Scouts, and baseball cards. And the comedy’s reliance on puke and poop jokes more cements that this flashback movie is for kids, who might be more forgiving of the numerous sequences that set up something kinda funny and then let them fall flat. Jake’s quest to get a Nintendo involves different strategies (like going door-to-door selling wreaths, or trying to charm folks at a retirement home), but there’s so little pep behind obvious jokes. It becomes more and more blatant that a script was built around the desire for a Nintendo, without the comedy that could give the movie its own identity.

The Nintendo nostalgia is of course mighty thick here, and it goes beyond the console being just any holy grail that could fill in for a story about a young boy learning the truer meaning of the holidays. At first it's a self-aware, like how there's a whole sequence that makes fun of the infamous, heavily flawed Power Glove, while also only noting it was something only your town's egomaniacal rich kid would have. Then the movie gets pretty strange, as Jake’s quest feels more like subliminal messaging, filled with variations on the phrase “I need a Nintendo.” And then it gets blatantly creepy, when Jake encounters a talking Nintendo store display. It hypnotizes him to play the games it has (Jake ends up playing “Rampage” in one of the movie’s few gameplay moments) and then the creepy game console calls him a “good boy.” It’s supposed to be a goofy scene; it looks a lot more like stranger danger.

Sorely missing throughout this Christmas story is any type of emotional connection, beyond Jake's constant disappointment when one plan after another backfires. The last five minutes of the movie try to address this gap—and give a big endorsement to fun that happens away from screens—but it’s too little, too late, even if comes with a creative answer to how Jake got his Nintendo. Plus, it has some unfortunate makeup that makes one character look like a ghost being held hostage instead of an older version of themselves, and it’s a little hard to feel the warmth when you just want to laugh. "8-Bit Christmas" may have a more grounded approach to gamer culture than you'd expect, but it’s constantly beat by its own limited imagination. 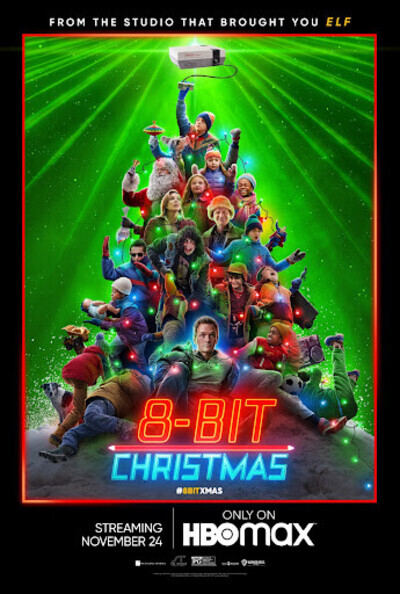 Rated PG for rude humor and some mild violence, language and suggestive references.