The promise of a better life is intoxicating and all-consuming, and thrives in locations of grand economic disparity. “7 Prisoners,” set in Brazil, sketches the limitations and lamentations of such dreaming. There are hierarchies of power that control economies and labor forces, and there is exploitation built into those very hierarchies to maintain said power at the very top. Survival is easier said that done, and “7 Prisoners” is a fraught thriller that wonders at the fragility of the human soul.

In director Alexandre Moratto’s familiar but still engrossing film, 18-year-old Mateus (Christian Malheiros) lives in the Brazilian countryside with his mother and sisters. They adore him, and he adores them. His mother works endlessly to provide for them, and the cost of living—groceries, electric, phone cards—is sky high. So when a recruiter named Gilson (Maurício de Barros) offers Mateus and three other young men from his village the opportunity to travel to São Paolo, they readily accept. Catanduva was beautiful, but Mateus, Samuel (Bruno Rocha) Isaque (Lucas Oranmian), and Ezequiel (Vitor Julian) don't want to work the fields the rest of their lives.

They leave behind wives, mothers, sisters, and other relatives to climb into Gilson’s van and drive into the city, and Moratto captures from the very beginning the disconnect between there and here. The countryside is tranquil but empty, while the skyline of São Paolo—with its endless skyscrapers and gigantic glass spears—is glittering but unwelcoming, full of sharp edges and unnatural textures. It’s a thoughtful visual introduction to the junkyard where Gilson deposits the four young men, which seems eerily like a prison. Dilapidated bunk beds where Mateus et al. are to sleep. Barbed wire lines the top of the junkyard walls. And its heavy metal gate clanks down with brutal finality, an ominous sound that signals the contract the young men thought they were getting isn’t quite so generous.

As Luca, the man who runs the junkyard and makes the men’s lives miserable, Rodrigo Santoro is practically unrecognizable. Gone is the heartthrob of “Westworld,” the dashing Castro in the “Che” duo of films, the much-hated Paulo from “Lost,” and the monstrous Xerxes from the “300” graphic novel adaptations. He is shaggily bearded, loose-limbed, quick with a slap and casual with a gun. With the easy narcissism and manipulation of so many oppressors, Luca tells the young men that they owe him for their travel, for their advance payments, for the crummy gruel they eat three times a day, for the rotten mattresses they sleep on, for the gloves they have to wear while handling scrap metal, copper, and rubber in the junkyard. “You’re lucky I keep track of everything,” Luca says with faux concern, and the men need to pay it all off.

Why don’t they leave? They try. Why don’t they complain? They do. “7 Prisoners” is produced by Fernando Meirelles, of “City of God,” and Ramin Bahrani, of “The White Tiger,” and both those filmmakers have crafted in their movies similar stories of top-down exploitation and the impossible weight placed upon the person on the bottom rung of that ladder. Moratto’s work is very much in conversation with those predecessors both in its overall narrative and in its protagonists Mateus and Luca. As the two men warily circle around each other, their animosity morphs into a form of begrudging respect and unintentional loyalty. Are they really so different?

The script, from Moratto and Thayná Mantesso, makes us purposefully uncomfortable with its answers. As “7 Prisoners” traces lines of influence upward, we meet more exploited laborers, more brutal enforcers, more nouveau riche bosses, more people in the web who benefit from abuse and corruption. Editor Germano de Oliveira keeps the film light on its feet as we travel around Brazil, grasp the quid pro quo business relationships that transcend national boundaries, and inch out alongside Luca on the grimy precipices upon which he is operating.

As the film probes at the human cost of so many broken promises and so many ruined lives, Malheiros’ expressive face becomes our anchor. “7 Prisoners” relies on him over and over to reflect our emotional disquietude, and the film is so nuanced in its transformation of its own stakes that you might not notice the gravity of all this until the final sequence. “Give him protection and guide him on the path ahead,” Mateus’ relatives had prayed before he left, and the path “7 Prisoners” guides him on is a humble-in-execution, devastating-in-impact journey that slips and slides between the rigid boundaries of what we consider freedom.

Now playing in select theaters and available on Netflix on November 11th. 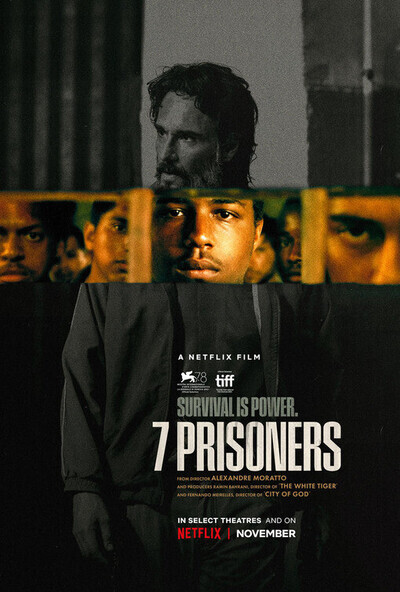 Rated R for language, some violence and a sexual reference.