Jason Schwartzman's performance as a surly slacker and Olympia Dukakis' backup work as his grandmother are the only reasons to see "7 Chinese Brothers," a comedy about a man of no ambition—well, that and the image of a world largely indifferent to professionalism, honesty and decency.

Written and directed by Bob Byington ("RSO," "Harmony and Me"), this is is the kind of movie that makes you appreciate Schwarztman's unique brand of screen energy, if you didn't already. Starting with "Rushmore" and continuing through the likes of "I Heart Huckabees," "Marie Antoinette," "Scott Pilgrim vs. the World" and four more Wes Anderson films (plus two shorts), he's somehow managed to take characters that might seem merely irritating (or far worse) on paper and find some humanity in them, so that you care what happens to them, or at least don't root for their failure.

"7 Chinese Brothers" is another performance in that vein. Schwarztman plays Larry, a witty but smug and cranky loner who gets fired from his restaurant job for stealing liquor from the bar and straight-up lying about having done it. Larry is a mess. He drinks booze out of a styrofoam cup all day, even when he's driving around town, and seems to have few friends (a nurse named major, played by Tunde Adebimpe, doesn't count, as he's there mainly to supply the hero with pills he stole from his job at a nursing home). If he didn't care about his grandma, played by Dukakis, and dote on his bulldog, whom the director cuts to in closeup whenever he needs a guaranteed laugh, you might not believe Larry capable of caring about anyone or anything.

But hey, what do you know: this is another one of those Manchild Finds Redemption by Entering Into an Adult Relationship with a Woman movies. The woman in question is Lupe (Eleanore Pienta), who works at the quick lube where Larry gets a job vacuuming out cars when it becomes clear that his grandma can't afford to keep bailing him out. Little by little, the hero starts to sense some hope up ahead—some kind of a future, even. Maybe.

You've seen this movie before in different guises. Byington does seem to have a vision of life, though, which is more than you can say for most comedy directors working at this budget level. The world of "7 Chinese Brothers" is one where most people appear to have given up, or been raised not to try (in any moral or ethical sense) from the start. Byington is good at filling the frame with background detail, much of it revealed in brief cuts or moving camera shots, that confirms Larry as but one do-nothing selfish jerk in a world filled with them. Everybody's working some kind of angle here, it seems, or taking a shortcut that would appall others if they knew they were taking it (watch for the brief shot of a cook in the opening sequence scooping piles of pasta from a giant pot with his bare hands).

All in all, this depiction of a world that's given up evokes the late, lamented HBO series "Bored to Death," which starred Schwartzman as a Brooklyn-based private eye who seemed to be the only idealistic and upbeat person in a morally and spiritually exhausted universe. And there are odd moments when Larry feels as if he could be a protean version of the lazy but essentially decent concierge that Schwartzman briefly portrayed in Wes Anderson's "The Grand Budapest Hotel." Schwartzman's intelligent eyes and deadpan reactions make him ideal for playing a cynical heel in a William Holden-Fred MacMurray vein, even as his slight frame and high tenor voice guarantee that he can't play guys as tough and fearsome as those actors often did, except as a joke. There's something genuinely special about him. That specialness goes a long way towards making this slightly-better-than-OK movie feel special, too. 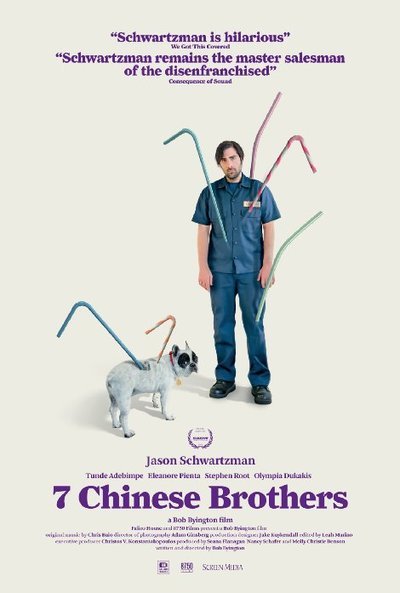