In life, perhaps only a minority of people could be called, or would call themselves, true romantics. But in the cinema’s dark, it’s different: Most viewers enlist in the cause of romance, whether reluctantly or wholeheartedly. That’s because movies, especially those dealing with romance, offer the lure of dreams. We want the spell to work, the charm to cast its magic, so that our hopes are vindicated in imagination even if they’re not in life.

French filmmakers are legendarily good at exploiting this sentimental wishfulness, and are so commendably willing to explore the heart’s conundrums for ordinary adults that we’re often inclined to go along with conceits in their films that might be hooted off the screen in other movies.

So it is in Benoit Jacquot’s “Three Hearts,” a curious, ultimately unsatisfying romantic comedy about two sisters in love with the same man. The film opens with a classic meet-cute. Marc (Benoît Poelvoorde), a tax attorney, misses the last Paris train one night in a provincial town, so he repairs to the nearest bar, where he glimpses attractive, willowy brunette Sylvie (Charlotte Gainsbourg). When she leaves, he follows her onto the street and strikes up a conversation that ends up resulting in romantic chemistry serious enough that they plan to meet in Paris a few days later, despite the fact that she’s married.

What’s odd about this scene is the striking mismatch between the two people. Gainsbourg is one of France’s loveliest and most magnetic actresses. Poelvoorde, on the other hand, is a paunchy, balding guy who here spends much of his screen time looking at his shoes. So you can see why he would be drawn to her, but not the other way around. (Lest the reader suspect gender bias in that comment, the reviewer asked a female friend on leaving the screening what she thought of Marc. She made an unpleasant expression and described him as “a schlub.”)

So do we reject the film at this point on believability grounds, refuse to suspend disbelief any further? Hardly. The promise of a romantic payoff is strong enough in movies like this that most of us will still go along with Jacquot, waiting to see if he can really make the spell work. Who knows, maybe he’s taunting us, daring us to decamp by making the premise relatively far-fetched, even by this genre’s credulity-stretching standards.

The writer-director is a confessed fan of classic American romantic melodramas such as Leo McCarey’s “An Affair to Remember,” so you won’t be surprised to learn that the planned rendezvous between Marc and Sylvie never happens. He has a heart attack as he’s driving to meet her, and she leaves the Jardin de Tuileries alone and disappointed.

This relatively brief part of the story effectively serves as a prologue. When the main part of the tale commences sometime later, Sylvie has moved to Canada with her husband but keeps in constant touch with her beloved sister, Sophie (Chiara Mastroianni), who runs an antiques business in their hometown and frequents the house of their mom (Catherine Deneuve). If you haven’t already guessed what happens next, here it comes: In the course of his business, Marc meets Sophie and experiences the same chemistry that he did with her sister earlier. Sophie is so smitten with Marc that she dumps her man—who, like Sylvie’s husband, is markedly more attractive than the tax lawyer—and marries him.

Naturally, much of the rest of the story teases us with the question of when the three main characters will discover their actual relationships, and what this will do the sisters’ mutual affection, not to mention their feelings for their romantic partners. As you might expect, Jacquot spends lots of time drawing things out by having Marc and Sylvie just miss glimpsing each other on Skype, Sylvie’s promised return to France being delayed, and so on.

Could the story as described till now possibly have a payoff dandy enough to justify all the labored contrivances it entails? Possibly, but that would almost certainly involve our believing in and really caring about the characters. Which doesn’t happen here. As already indicated, the sisters’ attraction to schlubby Marc doesn’t ring true from the first, and it doesn’t grow any more credible as the film wends onward.

Perhaps even more problematic, viewers aren’t given any strong rooting interest in any side of the romantic triangle. Do we want Sophie and Marc to remain secure in their provincial marriage, or would we prefer Sylvie to come back and bust it up? And if we do hope for one woman to best her sibling, is that because we find one actress—not the character she plays, mind you—more attractive than the other? Such is the kind of question a canny director will avoid leaving in a viewer’s mind.

Jacquot is known for writing appealing parts for actresses, and sometimes getting memorable performances from them. Here, his greatest asset is the believably shaded and alluring turn by the sylph-like Gainsbourg, one of Europe’s great screen presences at present. Mastroianni seems less complex and compelling by comparison, and her real-life mom is given relatively little to do as her fictional mom, but who cares: she’s Catherine Deneuve, who can do more with a raised eyebrow than most actors can with a hysterical tantrum.

With these performers working together, it’s a shame that Jacquot can’t give them more to do that justifies our attention. But “Three Hearts”—the title could belong to a D.W. Griffith melodrama—is one of those films that raises our romantic expectations only to disappoint them, with a story that ends up collapsing under the weight of its absurdities. 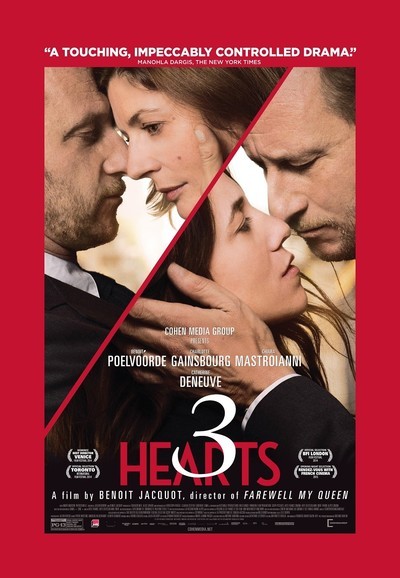