Powered by JustWatch
A movie can mean well but not necessarily work well. Being tasteful can get in the way of being truthful. Such is the frustrating case of “3 Generations,” which takes on the topic of gender dysphoria with a talented cast but not much to say.

Director and co-writer Gaby Dellal’s film—titled “About Ray” when it premiered at the Toronto International Film Festival way back in 2015—shows sensitivity in depicting such an emotionally complicated subject. But in doing so, Dellal and co-writer Nikole Beckwith end up skimming the surface rather than mining for meatier insights. The actresses they’ve assembled are more than equipped to dig deep, and you long to see them do just that—or at least to navigate the film’s tricky situations with humor that’s less hokey.

Elle Fanning stars as Ray, a transgender teen living in New York City. Ray was born Ramona, but knew from a young age that he was a boy trapped in a girl’s body. Now at 16, Ray wants to begin the process of transitioning physically, as well, through hormones. But while he’s sure of himself as he makes this significant shift, his single mom, Maggie (Naomi Watts), still harbors some apprehension, even though she outwardly says and does all the right, supportive things.

Maggie and Ray live with Maggie’s mother, Dolly (Susan Sarandon), and her longtime partner, Frances (Linda Emond). They all occupy one of those impossibly charming, rambling, only-in-the-movies brownstones, although it’s unclear how any of the adults living there make enough money to afford it. Theoretically, you might expect that because Dolly is a lesbian, she’d be more understanding of Ray’s desire to assert his true self; the fact that she isn’t is one of the film’s more intriguing—yet unexplored—elements.

But “3 Generations” isn’t really about Ray. It’s really about paperwork—specifically, the consent form both his parents must sign before he can begin hormone therapy because he’s underage. And so ultimately, the film is about Maggie, as she hems and haws over whether to approach Ray’s long-absent father (Tate Donovan) or just forge his signature and avoid agonizing over long-suppressed mistakes of the past. That may be a more accessible story to a larger audience, but it’s not nearly as interesting a conflict as the one Ray is going through.

Fanning can’t help but be a magnetic screen presence at all times, even in shaggy hair and boxy sweaters. She exudes teen angst, but with an even sharper edge; Ray isn’t just raging against adolescence, but against the constraints of his very existence. We get glimmers of that inner struggle through the movies he makes with his camera phone, but they consist mostly of images of skateboarding and the girl he has a crush on—the gauzy, superficial stuff of music videos.

But the women who help raise him are even less defined. “3 Generations” unfortunately calls to mind last year’s similar yet vastly superior “20th Century Women,” which also co-starred Fanning and also was about a disparate group of maternal influences helping shape a teenage boy in a non-traditional household.

Watts’ Maggie is a collection of tics and neuroses; the fact that she keeps trying to quit smoking is facile shorthand for her fragile inner state. Sarandon and Emond get even less to work with beyond shticky bickering and bantering; they meddle, benevolently, and they keep the booze flowing—a vice that’s meant to signify a comparative looseness. A silly sequence in which the three women pile into Dolly’s rickety Rambler to rescue Ray when he schleps to suburbia to confront his dad feels like it belongs in a different movie, and it highlights the characters’ superficiality.

The film itself is a journey that had the potential to be far more entertaining—and enlightening. 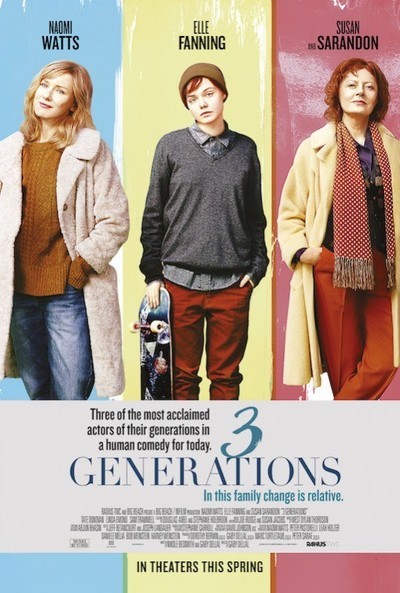