If Al Gore's Oscar-winning documentary "An Inconvenient Truth" was 90 percent terrifying with 10 percent at the end providing a little hope about the future of the planet, "2040" reverses the percentages. An Australian dad (writer/director Damon Gameau) imagines what life could be like for his four-year-old daughter 20 years from now with a brief but very clear depictions of the precariousness of our current carbon overload and its consequences. But most of the movie is about inventions and initiatives already in place that if more broadly adopted would reverse the melting of the ice caps and rise and chemical changes in the oceans so that his daughter and the other children featured in the film can live in a safer, cleaner, more equitable world. The biggest risk in fighting climate change is an overwhelming sense of helplessness. "2040" points a practical, achievable path toward solutions, but its most important contribution is a sense that change is possible. Gameau says that he wants "to create a vision of a different future" with "an exercise in fact-based dreaming." This film does not scold us; it is hopeful.

He shows us that different future, following each visit to someone working to reduce and reverse climate change with a projection 20 years ahead, showing us what widespread adoption of those approaches would mean, from turning the two-thirds of Los Angeles now used for cars (parking and freeways) and skyscraper roof tops into gardens to decentralized solar power grids that are not just environmentally beneficial, safer, less vulnerable to failure or attack, more efficient, and cheaper but are democratizing and community-strengthening. It is bottom-up economics, with money staying in the community instead of top-down, where it tends to be diverted to intermediaries. In the 2040 projection, we see Gameau's now-adult daughter telling her future version of Alexa that she will not need to access power when she is away for four days. The system asks whether she wants to sell the electricity back to the grid or donate it. She opts to donate, and is on her way.

We see one of those solar power "micro-grids" in today's Bangladesh, where the primary energy source had been kerosene, messy, expensive, and unhealthy. For the first time the community has enough power to watch sports on television and go out at night. As Gameau suggests, it may be easier to go from no electricity to a completely new solar-based system than to switch deeply entrenched interests and technology, especially when fossil fuel is, as in the United States, subsidized by the government so that the true economics are not optimal for responding to market forces and increased efficiencies.

Gameau shows us how cars will not need to be owned as physical objects (and signifiers of status) that spend most of their time parked in garages and lots; instead we can use on-demand driverless vehicles. The 2040 daughter looks at 2020's beef swap in the US, with the same amount imported as exported and says, "What were you guys thinking?" He notes that even if all emissions stopped today, we would still need to "draw down" carbon to reverse or slow climate change, with "regenerative" farming and, my favorite segment, a farm inside the ocean with the world's fastest-growing plant, a seaweed that can both absorb carbon and serve as food.

It can be done. But that does not mean it is easy. Gameau speaks to us from an airplane, where he ruefully acknowledges the carbon footprint of making the film itself (offset, as we learn before the movie begins, with contributions), and the cup he is drinking water from "that will probably end up in the ocean hurting a turtle." He briefly acknowledges the biggest impediment to change, including the fake front groups with deceptively credible names that are all funded by the fossil fuel companies to try to discredit climate science. (For more on this, see the documentary "Merchants of Doubt," with the fossil fuel industry deploying the same people and tactics that delayed action on tobacco for decades.)

The most effective reminder of the urgency of action is the commentary from children who are sadly all too aware of the precariousness of the environmental challenges, though their proposed solutions are not always practical, like the girl who want to invent rocket boots that use plant-based power to get us where we want to go. My favorite is the boy who wants two things: more trees and chocolate rain.

Gameau is an engaging guide, skilled at making  complicated subjects accessible, with well-chosen experts, engaging visuals, and an upbeat outlook. He may be overly optimistic about the political and economic impediments to change, but he makes the possibilities so appealing that his vision of 2040 seems within our reach. 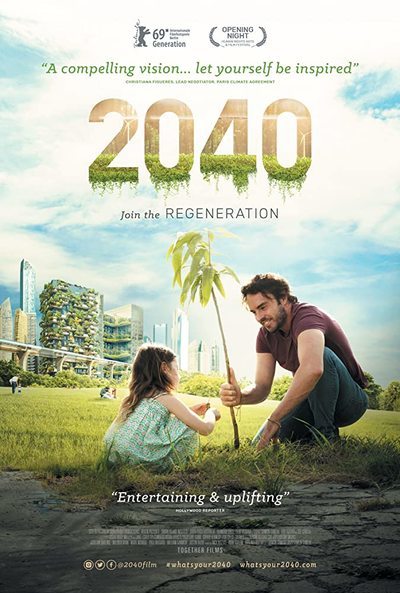 Damon Gameau as Himself

Zoe Gameau as Herself