It’s 2018 AD and 67 year-old Indian film Super Star Rajinikanth (the "Super Star" must be included in all of his films’ advertisements, according to his contract) has starred in two of the most energizing films of the year. "Kaala," the first, is a relatively sober, socially realistic gangster drama/musical that also features impressive slow-motion fight scenes, rousing agit-prop chants ("Educate! "Agitate!"), and some dancing in the streets. "2.0," Rajinkanth's sequel to the loopy 2010 Isaac-Asimov-influenced robot-superhero blockbuster "Endhiran," is a bit more unhinged.

"2.0" is one of only three 2018 films to be shot in 3-D (the others being Russian fantasy sequel "Viy 2" and the James-Cameron-produced/Robert-Rodriguez-helmed "Alita: Battle Angel"). "2.0" is also a superhero film about climate change, the dangers of cell phone use (according to the film, they have been linked to abortions?), and political corruption. Rajinikanth plays robotics scientist Dr. Vaseegaran, a sagacious egghead who revives his Astro-Boy-like creation Chitti (also Rajinkanth), the titular robot, just so Chitti can fight a sentient tsunami of cell phones that sometimes takes the shape of a kaiju-sized bird of prey thanks to the animating spirit of a pissed-off climate-change activist Pakshi Rajan (Akshay Kumar, who is, as always, down for whatever) who hung himself from a cell phone tower and, in the process, became a bird-man-god thing. Also, Chitti helps to mobilize an army of robot clones—some the size of cell phones—so that they can fire guns and make hilariously grim threats to Kumar's bird villain. Roll over, Sylvester Stallone: there's a new elder statesman of Not Aging Gracefully But Still Somehow Making it Work, and his name is (still) Rajinikanth.

Not a lot of this gonzo scenario immediately makes sense, but that's ok: "2.0" is all about energy, so you'll know whether or not you'll love this film within minutes of watching it. Still, good energy is also literally (and not coincidentally) what "2.0" is about. A mysterious animating force takes control of India's cell phones, ripping them out of their dumb-founded users' hands and forming an animated, sometimes-tweeting, sometimes-buzzing digital cloud. Vaseegaran is called on to help fix this bizzaro situation, but for a while, "2.0" is more about the Cell Phone Cloud, which we will later learn is an instrument of Rajan's revenge—FROM BEYOND THE GRAVE. Vaseegaran even delivers an illustrated speech later on that explains how Rajan managed to use his very powerful, very evil aura to turn a whole country’s cell phones against them. Thankfully, the only thing that can match Kumar's crazy-high energy—he devours almost every scene he's in, sometimes while wearing a big ol' bird costume—is Rajinikanth, Rajinikanth, and more Rajinikanth.

No, seriously, there's a lot of Rajinikanth in “2.0.” The marquee-topping star may pull a Stallone and make (some) room for co-stars Kumar and Amy Jackson, the latter of whom plays Nilla, a sexy lady robot who cracks wise and sometimes appears to let Chitti save the day. But seriously, there is a LOT of Rajinikanth in "2.0," like how Vaseegaran sometimes punctuates declamatory thoughts by yelling "DOT" (another way of saying "Period") as well as the hectoring but weirdly affecting tone of any scene where Kumar's character laments that birds are being inadvertently killed by cell phone radiation just because cell phone users are lethally apathetic ("Every individual who owns a cell phone is a murderer").

There's also literally a lot of Rajinikanth in "2.0": thousands of Chitti's robot clones swarm the Rajan-controlled cell phone horde, the latter of which looks shockingly ferocious in good-/expensive-looking set pieces. An army of mini-Rajinikanth robots sing some of the goofiest normcore 2018 disses you'll hear this side of the new Eminem album (my favorite of Chitti’s boasts: "I am six feet tall/you are a radish, that is all"). But only after hundreds of man-sized Rajinikanth robot clones form a giant soccer ball, and fire a barrage of automated rifles at the Big Cell Phone Bird (and into the stands of a massive soccer stadium, sometimes barely missing innocent bystanders). This last stunt is basically a repeat of a scene from the first “Robot” movie, but that doesn't make it, or the many other ways that Rajinikanth knowingly weaponizes his ego much less endearing or insane. At one point, Rajinikanth literally pats himself on the back when Chitti thanks Vaseegaran for creating him. This movie has chutzpah for days!

I can't lie: I've got Rajinikanth fever, and it's thanks in no small part to the rowdy crowd of Indian film buffs that filled last night's late-night (9:30pm), original language (Tamil), opening night screening of "Robot 2.0." They roared whenever Rajinikanth did anything funny, vaguely boastful, or flat-out crazy, like when he—as Chitti, wearing a silver lamé suit, roller skates, and the kind of clunky sunglasses that went in and out of style back when the original "V" was originally on the air—gets attacked by a giant robot-bird monster. Some moviegoers were, uh, skeptical, so they talked back to the screen (though often in hilarious ways befitting of a 42nd Street screening). But even the most skeptical moviegoers sang along and shouted happily at almost every action beat. Me too: against all reason—against all common sense—“2.0" works, and in a big, big way. 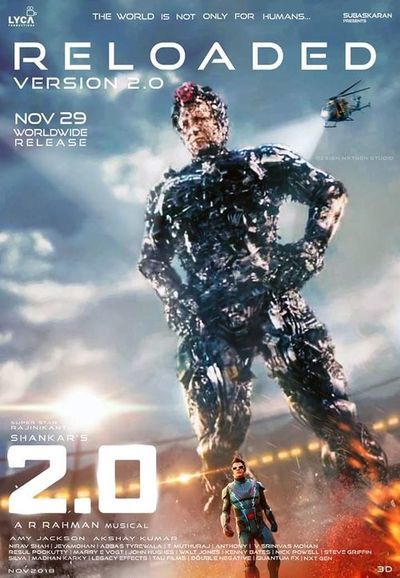