With "2 Guns," Universal Pictures has taken box office pleading to a new level: The desired opening weekend gross is written directly into the script. With a budget around $80 million, "2 Guns" etches into your subconscious mind a little more than half that amount, brainwashing you into telling your friends to donate their ticket money. This sounds far-fetched until you count the number of times someone says the perceived target number, $43.125 million. Say it with me: "Forty-three point one-two-five million dollars." Marvel at the memorable unwieldiness of the phrase. This amount drives the plot, is a concern for every character, and is uttered around 43.125 million times. Each main actor gets multiple chances to say it with his or her personal spin. Bill Paxton has the most fun with it; his slow, staccato mentions sound like a Hemingway sentence read aloud.

If you remember nothing else about 2 Guns, you'll remember the exact amount that gets most of its cast killed. The money appears onscreen as an enormous, gasp-inducing pile of cash. Director Baltasar Kormákur and cinematographer Oliver Wood always shoot it from above, usually with someone in frame as a visual counterpoint. It would take 43.125 million rap videos set in strip clubs to match the fetishistic glee with which this money is presented, especially in the film's climax.

Money corrupts, and everyone in "2 Guns" is afflicted: The drug cartel leader, the cops, the DEA, the CIA, and the Navy all get dumped into the same bottomless pit of deceit. Double-crosses abound, starting with those of our protagonists Bobby (Denzel Washington) and Stig (Mark Wahlberg). They plan to rob a bank across the street from a diner with "the best donuts in 3 counties." Neither is aware that the other is on the right side of the law—Bobby's DEA and Stig is with the Navy. The duo, who have been operating together over two years, plan to frame each other as a means to the same end: the capture of drug lord Papi Greco (Edward James Olmos). The targeted bank supposedly contains Greco's drug money in safe deposit boxes.

I was surprised how long the film keeps us in the dark on the intentions of Bobby and Stig. The commercials and the trailer reveal their identities immediately. After the robbery, and the discovery of far more money than anticipated, Stig shoots Bobby when the latter reveals his true identity. Stig is repaid for his Naval loyalty by the murderous intent of his superior officers Quince (James Marsden) and Jessup (Robert John Burke). These and other familiar plot devices lead to the reteaming of Bobby and Stig. Mucho macho mayhem ensues.

The trailer also reveals that the oft-mentioned $43.125 million doesn't belong to Papi Greco. The true owners of the money are represented by Earl (Bill Paxton), a Southern-fried cross between Anton Chigurh and Chang from "Only God Forgives." Earl asks everyone he encounters for that money, starting with the poor manager of the knocked off bank. When Earl doesn't get answers, he tortures and brutalizes his victims. Paxton clearly enjoys his sadism, bringing to it a committed, pitch-black comic vibe. This makes his every appearance an uneasy one.

Along for the ride is Deb (Paula Patton), Bobby's on-again, off-again DEA agent love interest. As expected, she provides the brief nudity the MPAA description warned you about. With the easy chemistry she has with her "John Q" co-star, she also provides some emotional heft for Bobby. While she's eventually a major cog in this machine of a plot, this is still a boys' club of a movie. Bobby and Stig go after all those who wronged them, forming the predictable bromance along the way. It's a cinematically natural path for these characters, even if this love affair is consummated by bullets piercing each other's flesh.

You've seen all this before, and many times. "2 Guns" works because it's essentially several riffs on familiar material. Cliché is not a bad thing if it's done right. Like a good jazz improvisation, "2 Guns" leads to the same place but not the way you may expect. The tone, pacing and staging of the action sequences are pleasantly surprising. This is a slower, more meditative film than advertised, finding time for quirkiness and humorous banter alongside the explosions.

The acting is better than the standard action film requires. Patton manages to wring conflicting emotions from her character and from us. As Stig, Wahlberg plays an even more over-the-top version of his cop character from "The Other Guys." He's funny, a tad sadistic, and manages a sincerity toward Washington that feels genuine. As Bobby, Denzel is Denzel, charming, a bit goofy, and incredibly unflappable. When Earl literally threatens Bobby's manhood, Paxton and Denzel play the scene as the coolest satire on masculinity I've seen in ages. Edward James Olmos has more character, world-weariness and intimidation in one line of his famously textured face than the screenplay offers Papi Greco, which makes him a less of a caricature.

The real star here is that money. The sheer physical size of it makes it damn near impossible to transport. "2 Guns" gets plenty of mileage from this; when Stig tells Bobby to take it all, I thought about how long it must have taken him to load it into their car. Later, in the film's best sequence, said money not only upstages Bobby and Stig but elevates them to their highest level of badass. Flying through the air after a car explosion that should have incinerated it completely, that $43.125 million cascades over our heroes who, with their backs to one another, open fire on their opponents. You can see that on the commercials. It looks a lot better when you're sitting in the theater. 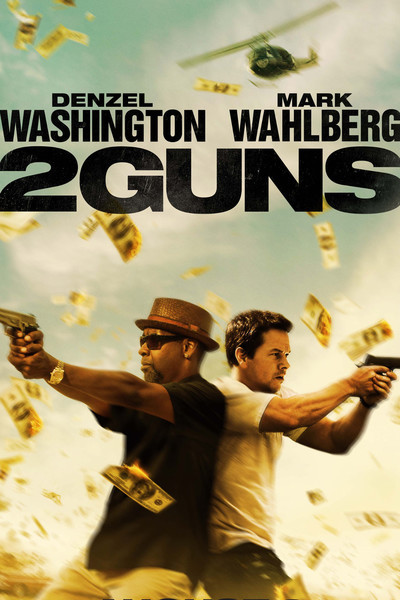