It takes about a half hour (or, approximately 27 minutes) for the admirably ruthless indie psychodrama “1BR” to get really unpleasant. Until then, “1BR” is a familiar Los Angeles horror story: an unfortunate patsy, I mean young woman runs away from home and is immediately preyed upon by the members of an unassuming, but vicious gated community.

At first, you might not think that Sarah’s neighbors are capable of being bloodthirsty cultists, because they listen to AM radio (a lot of “Happy Heart”), and live in a cozy apartment complex with a pool and regularly scheduled barbecue shindigs. Still, you also might be able to guess that something’s amiss as soon as twenty-something architecture student Sarah (Nicole Brydon Bloom) attends an open house: paternal community leader Jerry (Taylor Nichols) asks Sarah if she has any LA-based contacts or pets. These two boilerplate questions might not seem like red flags, but well, this is a horror movie about a single white woman called “1BR.”

And as if that wasn’t bad enough: writer/director David Marmor prefaces this scene with a dialogue-free, slow-motion montage that looks like it’s the cornerstone of a tacky and totally unbelievable ad campaign. Just take a look at the apartment’s inclusive, multi-culti community, whose members include: a little white girl chasing a ball; a pregnant woman talking to an older beardo; a same-sex couple doing their laundry; and a black woman watering her plants. Everything seems too good to be true, because it obviously is.

To be fair, you can’t honestly blame Sarah for her victimization. She just ran away from her overbearing father (Alan Blumenfeld), and while she owns a concerned-looking house-cat, she only has one other source of non-neighborly human contact: Lisa (Celeste Sully), a sympathetic colleague at Sarah’s generically taxing and underpaid internship.

Then again, if you think Sarah’s cat will survive “1BR” unharmed, you are probably not the ideal audience for “1BR.” Sarah’s neighbors essentially live in a self-policing panopticon, a central metaphor that’s made explicit in a later scene where her neighbors observe each other through closed-circuit cameras. There are also a few conspicuously mounted cameras trained on the neighborhood’s human monitors, though Sarah’s told not to think about those cameras. Just like when Brian, in early scene, tells Sarah not to worry about the cameras that are posted above the apartment complex’s mailboxes. Everything in “1BR” is over-exposed, often literally thanks to the movie’s basic camera set-ups and general emphasis on naturally and/or harshly front-lit close-ups, or medium shots of brown stucco walls.

At this point, I must admit: I was also reluctantly taken in by “1BR,” mostly because, at the 27-minute mark (or so), Marmor truly commits to making life hellish for poor Sarah. In theory, there’s not much to Jerry and his Synanon-like fixation with de-programming all the “selfish fantasies” and “bad conditioning” that define Sarah as a normal, self-interested twenty-something. But it’s hard to resist “1BR” given that every other scene escalates Sarah’s peril in a memorably sadistic way.

Several sequences involving graphic violence and psychological torture are effectively jarring because they’re as over-ripe and sensationalistic as this type of horror movie needs them to be. I mean, I knew what type of movie “1BR” was before I found out how evil Brian is, or what happened to Lester’s eye. But I was still impressed by “1BR,” especially since Marmor somehow found a way to make his movie’s pervasive grubbiness seem more like a feature than a bug.

I’m honestly not sure how well a movie like “1BR” will play for horror fans now that there are so many true-crime docu-series and LA-set indie horror films about serial murderers, religious cults, and other seductive frauds. I can, however, tell you that I eventually stopped second-guessing Marmor’s creative choices, and eagerly waited for Sarah’s situation to become even more bleak. There’s a light at the end of the tunnel for Sarah, and seeing her claw her way to it is often fun, albeit in a gasp-inducing sort of way. 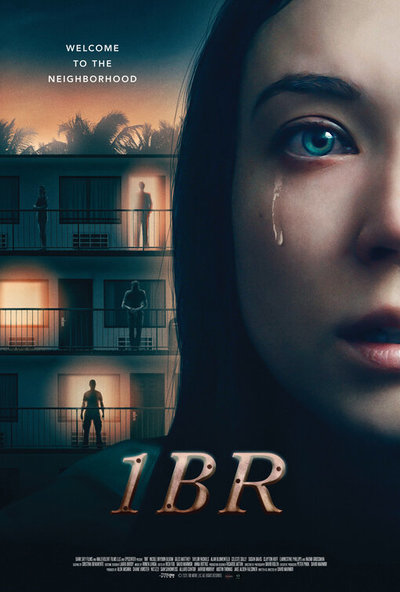