“I hate everyone, but I still think I am better than everyone else.” To understand the egotistical Kate Stone (a frenzied Taylor Schilling in a series of power suits), look no further than this statement she delivers early on in “Family,” Laura Steinel’s quirky and formulaic debut about a work-obsessed loner discovering her softer side. Appealing on a scene-by-scene basis but generic like its title—it might as well have been called “About a Girl” as a thematic nod to Chris and Paul Weitz’s superb 2002 film—Steiner’s dull comedy lacks the crucial feelings that could have made the suburban aunt-niece tale at its center more memorable.

It all starts with a voiceover, as these sorts of films often do—Kate wonders how she ended up in the midst of a raunchy, open-air gathering of Juggalos (those face-paint-wearing, seemingly vulgar, party-crazed rebels) just by doing something nice for someone for once. We soon find out just how unusual good deeds are for her, when Steinel takes us back a week where a perennially dissatisfied Kate treats everyone she crosses paths with awfully. A senior executive at a New Jersey-based hedge fund, Kate routinely agitates and insults fellow employees—in one instance, she offends a pregnant co-worker so severely that in real life, her controversial rudeness would have resulted in a lawsuit. In another, she belittles the familial relationships of her assistant. She isn’t exactly a popular employee of the month or life of office parties; though her colleagues’ rejection doesn’t stop her from crashing a baby shower to steal a slice of cake.

Things don’t seem to be much better at home where the selfish heavy drinker roams alone and ignores her familial ties. Still, her brother Joe and his wife Cheryl (Eric Edelstein and Allison Tolman) don’t hesitate to ask Kate the favor of watching their 11-year-old daughter Maddie (Bryn Vale, amiably disgruntled), while they tend to Cheryl’s dying mother. Kate’s overnight visit turns into a whole week, during which she observes an isolated and angry kid in Maddie, victimized by the impossible demands of her parents. Maddie sneaks off to a karate workshop taught by the affable Pete (Brian Tyree Henry), while Cheryl insists on the supposedly more girly ballet. She prefers to wear a suit to a school dance, yet she’s ordered to put on a feminine dress. Moreover, she seems to be picked on at school by a group of popular meanies. Seeing herself in Maddie and discovering her troubles slowly (while irresponsibly allowing her to get away with excessive snacks and chicken parmesan every night), Kate takes her niece under her wings, especially when Maddie makes friends with the Juggalo crowd through a chance encounter.

In fairness, “Family” makes a decent attempt in trying to dismantle sexist societal perceptions. Steinel examines the concept of being a toughened workaholic and wonders why it is deemed acceptable and desirable for men, when women with the same level of dedication get pushed to a lonely corner, often in competition to one another. True to her modest ambitions, Steinel thankfully doesn’t pair Kate with a romantic interest. Instead, she introduces a younger female executive whom Kate trains only to watch her become an alleged threat to her own career. Meanwhile, a second female frenemy lurks next door to her brother’s home: a helicopter mom (Kate McKinnon, bringing along much-needed frothiness) adamant to show a completely disinterested Kate the ropes, with tensely funny results.

And yet despite all that, the script neglects to give Kate personal depth beyond the bare minimum—“Family” almost takes for granted the idea that we’ve seen her kind before in countless other films. Consequently, Kate’s eventual make-good reunion with her father seems like an afterthought in her shakily sketched journey of self-realization. Still, Schilling makes the most of her part and establishes winning chemistry with Vale, reminding us that the star of “Orange is the New Black” should have become a more valued cinematic asset. As for the Juggalos … They remain hazily in the background even when they set the stage for a frantic finale. You won’t all of a sudden grow to care about this anarchic yet often misunderstood subculture, as it’s just another half-realized excursion from Steinel's debut. 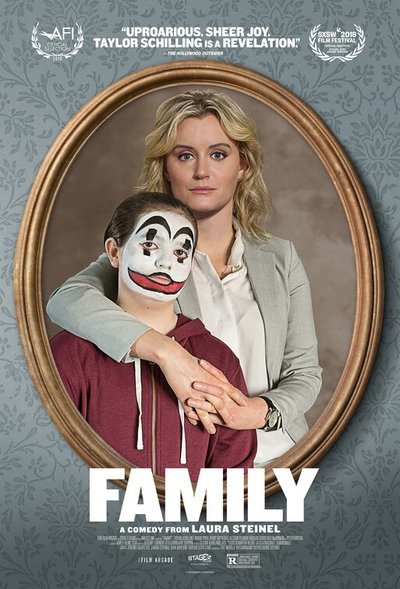 Rated R for language, some sexual content and drug use.