You'd be forgiven if you took a look at Bollywood mega-star Amitabh Bachchan in the sappy, but satisfying geriatric comedy "102 Not Out"—clad in a frizzy Einstein-like wig and fake-looking white beard—and wondered if he shouldn't be a little more protective of his image. Many handsome leading men lose their seductive confidence as they grow older, but Bachchan is such a industry-defining star that he can do (and often has done) whatever he wants, whether it's scowling pensively throughout a trilogy of "Godfather"-esque gangster films ("Sarkar," "Sarkar Raj" and "Sarkar 3") or playing a Cyrano de Bergerac-like bum who lends his commanding baritone voice to a struggling young movie star whose natural voice  isn't sexy enough ("Shamitabh"). Bachchan, now 75, can afford to coast on his charms, as he does in "Kabhi Alvida Naa Kehna," where he plays an insatiable aging horndog whose very appearance prompts a theme song of "Sexy Sam, Sexy Sam" to start spontaneously playing (his character's name is Sam, by the way).

Still, you might cringe when you learn the plot of "102 Not Out," no matter how much you love Big B: the young-at-heart 102 year-old Dattatraya (Bachchan) tries to teach life lessons to his crotchety 75-year-old son Babulal (Rishi Kapoor). This power dynamic is probably funniest to Indian film buffs since they already know that Bachchan is, in real life, only ten years older than Kapoor. But if you were to judge "102 Not Out"—the title of which is a cricket joke that has little to do with the film's plot—based solely on the information on-screen, you will thankfully find that while the first half of the film is precious and cloying, the back half is maudlin, but effectively moving.

The first half of "102 Not Out" is a broad comedy built on the back of a two-part joke that is repeatedly run into the ground: Bachchan's mischievous extrovert laughs and lectures Kapoor's google-eyed grumpy old man as Dattatraya proposes a series of perpetually escalating challenges to help Babulal think younger. First, Dattatraya makes his son get rid of some unnecessary baggage, like his hypochondria-enabled doctor's visits, and his childhood blanket. Then Bachchan, playing what is essentially a manic pixie dream grandpa, forces Babulal to go on a trip down memory lane, including visits to a playground, a church, and a bakery.

This chintzy portion of screenwriter Saumya Joshi's consistently sentimental narrative is mostly bearable thanks to Kapoor's comic timing and Bachchan's seemingly boundless energy. Kapoor deserves special praise: he scowls, sighs, and sinks his chest to his chin with consummate zeal. He also looks appropriately misty-eyed whenever his character has an emotional breakthrough. Kapoor generally does a great job of playing straight man to Bachchan's amusingly clueless Jiminey Cricket-like conscience.

That said, there are several unfortunate jokes about Babulal and Dattatraya's advanced ages rather than their behavior, as when Bachchan kicks a soccer ball and lustily skronks on a toy saxophone while wearing an unseemly ear-to-ear grin that makes him look, clad as he is in his wig and beard, like Rankin and Bass's Abominable Snowman. How are we supposed to take this guy or his life lessons seriously when he looks like that?

There's no simple answer to that admittedly loaded question, mostly because Bachchan's character is hard to take seriously until just before the film's halfway mark. The turning point is a scene where Babulal takes one of his dad's challenges and has a credible breakthrough. At this point, Bachchan's character lets Kapoor take over, and "102 Not Out" becomes a relatively sober melodrama about how awful it is to be old and taken for granted.

Babulal's estranged son Amol (Dharmendra Gohil) figures prominently in this hour-long stretch since he is conveniently—but sympathetically—blamed for neglecting his father, and therefore making Babulal feel unworthy of a good life. This is a very Bollywood mentality: Dattatraya, representing the older generation, knows best because he knows Babulal better than he knows himself, and therefore tries to teach his son how to not see himself as a mere reflection of his own ungrateful son's desires. There's even a psychodrama-style scene (complete with thunder, dim lighting, and declamatory recriminations) where Dattatraya lays out all the ways that Amol has neglected his father and his late mother. It's a bombastic sequence, but it works because Bachchan and Kapoor both deliver winningly hammy performances.

And at some point in this "Hush, Hush, Sweet Charlotte"-like scene, you realize that Bachchan's wig has become matted down. Patches of his scalp peek out from under his wig's wispy strands, and his chic circular glasses come off more often. And at this point, Bachchan stops looking like an aging star in a Halloween costume and starts looking like a vulnerable older guy who, in the right light, can still seem handsome. "102 Not Out" won't win Bachchan any awards, but it proves that this aging figurehead still wears his natural charms lightly. 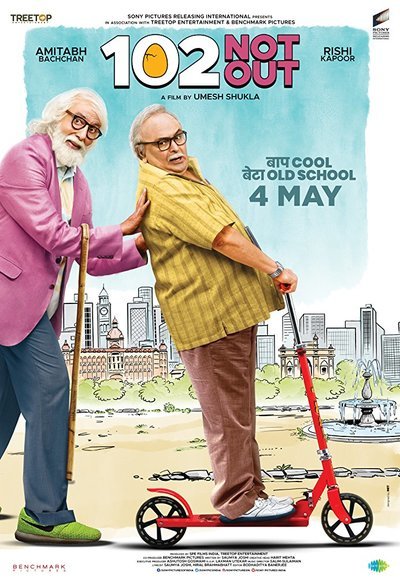