One of the biggest assets and problems with disappointing Indian gangster film "Sarkar 3" is that you can watch it without any prior knowledge of the superior first two films. "Sarkar 3" has only selective continuity with the first two films. Here we see aging gangster/wannabe politician Subhash Nagre (super-star Amitabh Bachchan) fighting a group of greedy politicians and crooked industrialists who want to displace 14,000 private citizens in order to start a new business venture. This is basically the same inciting incident as the one that kicks off "Sarkar Raj," the second film in director Ram Gopal Varma's "The Godfather"-inspired crime saga (Varma even boasts of the Coppola influence in a disclaimer at the beginning of "Sarkar," the first film). The key difference between "Sarkar 3" and its predecessors is that its characters do not seem more weary, enlightened, or even moved by the events of the previous two films. This is business as usual for Subhash, only told in a more dramatically inert, and ideologicallly numbing way.

There's a lot of baggage that viewers of "Sarkar 3" might like to know, but realistically do not need. For example: when we last saw Subhash, it was right after the death of loyal son Shankar (Abhishek Bachchan, Amitabh's real-life son). This loss is represented in "Sarkar 3" with unmoving recurring shots of Amitabh watering a plant by a portrait of Abhishek. Subhash is still the head of his "shadow government"-style organization, a group of mafia-like leaders who claim they are the face of their community's dissatisfaction with a corrupt politicians, police men, and business tycoons. He takes on corrupt politician Govind Deshpande (Manoj Bajpayee) and his shadowy criminal patron Michael Vallya (Jackie Shroff) with the help of hot-head grand-son Shivaji (Amit Sadh), the son of Subhash's prodigal (and also dead) son Vishnu (Kay Kay Menon).

This new story is disappointing on multiple levels. For starters: "Sarkar 3" begins as a story about two ideologically opposed characters, Govind and Subhash. Govind, during convincing political rally speeches, raises some valid points about Subhash's style of vigilante governance: why trust someone who rules through intimidation, and is not officially accountable to anyone? But Varma and Subhash wave away these concerns by making a puppet controlled by Vallya, a cartoonishly self-involved villain who wears sunglasses (at night, even) and is constantly futzing with his iPhone. This wouldn't be such a bad thing if many of the analogies and metaphors that Govind and Michael use when they're privately talking about crushing Subhash weren't so dumb. Govind makes a migraine-inducing analogy where he compares Subhash's adviser Gokul (Ronit Roy) to a powerful wave whose influence must be controlled in order to take away a small, but worrisome amount of metaphorical sand from under Subhash's feet.

And then there's all the condescending, sexist lectures that Michael gives to his airhead girlfriend—he even praises her for being heartless—shortly before he kills her because "she's starting to ask too many questions." Which also wouldn't be so bad if Shroff didn't deliver an underwhelming performance. Bachchan, a natural charmer, doesn't fare much better. He's constantly filmed in suffocating extreme close-up. In fact, Bachchan spends much of the film glowering imperiously at antagonists in dimly lit rooms while an uninspired Ravi Shankar (not that one, another composer with the same name) score forcefully underlines every tacit insult, and caustic declaration that Bachchan delivers. This man may be powerful, but you can't tell just by looking at "Sarkar 3."

The latest installment in Subhash's story is especially disheartening when compared to "Sarkar Raj," a film that is not only more moving, but also more ambitious. "Sarkar 3" hinges so much of its emotional heft on a twist that comes halfway through the film, and is not only thuddingly obvious, but also a telling sign of Varma's reliance on melodramatic shocks over psychological realism, character depth, and nuanced dialogue. "Sarkar Raj" largely concerned Shankar's vain attempt at working with his political enemies in order to benefit the people that he and Subhash claim to represent. There are real stakes in that film because it's not just about a wounded patriarch's righteous dismissal of everyone that disagrees with him. More importantly: the soap opera plotting in "Sarkar Raj" is more sophisticated, and generally involving. It's a step up for the franchise, and its finale promises a major shift in focus that "Sarkar 3" simply does not pick up on.

Realistically, all of the flaws and creative shortcuts that Varma ("Company," "Satya") makes in "Sarkar 3" are in both "Sarkar" and "Sarkar Raj." The main difference is that "Sarkar 3" is just more of the same, only worse. Your mind inevitably wanders, and you realize that you don't know anything substantial about Subhash other than his right always makes might. He's a political leader, but all we really know is he abhors corruption, and dislikes murder...until he has to kill himself and uses the same bullying tactics as his enemies. "Sarkar 3" may reflect a popular refusal to accept pervasive corruption in Indian politics. But it's so uninspired, and generally misconceived that one can't help but cling tighter to "Sarkar Raj," and wish that Varma's latest approached its level of ingenuity. 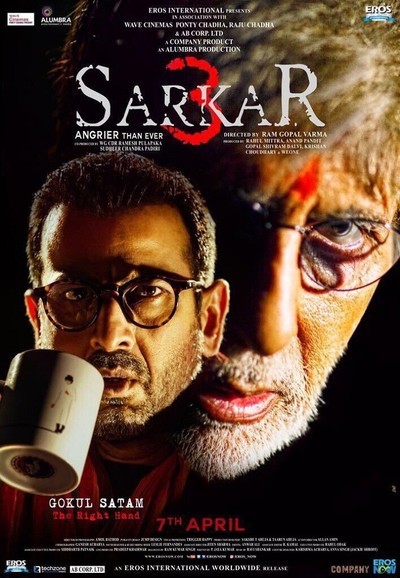