The most important thing Roger taught me

On the first anniversary of Roger Ebert's passing, I'd like to share the most important thing he taught me.

To be exact, it was more like a lesson I already knew, but that needed reinforcement.

As was so often the case, Roger led by example.

I started corresponding with Roger via email sometime in 2008, when he wrote to pick my brain about the daily details of operating a multi-author blog similar to The House Next Door, my first publication on the web. We wrote each other several times a week after that, sometimes to trumpet stuff we'd written that we were proud of, other times to call attention to a talented new writer or filmmaker that we thought the other guy should know about.

The single best email I ever got from him, though, came out of the blue, during a bad patch in my life.

At that point, sometime in fall of 2010, I'd been a widowed single parent for four-and-a-half years. I was thinking of giving up on journalism and filmmaking both. The economy had cratered two years earlier and showed no signs of recovery. Journalism was hit hard.  I hadn't held a full-time media job since 2006. Decently compensated writing and film editing gigs were so rare that I'd begun looking into other lines of work, applying for jobs as a limo driver, a supermarket checker, an associate media professor, and a counselor for at-risk youth. I'd also inquired about becoming an apprentice plumber, because I knew that even if journalism jobs dried up there would always be work for people who knew how to unclog pipes.

On the morning that Roger wrote me that email, I was depressed about the status of my current relationship, with a sexy and intelligent woman who nonetheless was incapable of fully accepting me and my children into her life, and thinking that at some point I'd have to break up with her. I was also depressed by my living conditions, which were intolerable. The children and I were living in a cramped railroad-style apartment over a jazz club. The building was infested with vermin. The preceding morning, after my kids and I had woken up covered in bedbug bites yet again, mere days after the landlord's latest ineffective fumigation, I'd taken photos of the welts on our limbs and added them to a folder of correspondence and documents that I planned to enter as evidence in tenant court.

I woke up, made myself a cup of coffee, turned on the computer to read the employment listings, and checked my email.

Along with the usual stuff, there was a message from Roger: 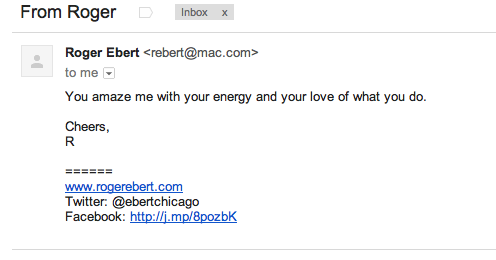 What blew me away about this email was that it wasn't tied to anything. Roger wasn't responding to something I'd said in an earlier email or to a particular video essay I'd made or a particular piece I'd written. He was just thinking of me, and dashed off a note telling me that my existence meant something to him.

That my life had value.

This is a lesson we're all taught from birth, if we're lucky: if you value someone, tell them. Don't wait for their birthday or an anniversary or a holiday. Tell them when the thought occurs to you.

Don't worry about choosing the perfect words. Just say it.

Sometimes we get wrapped up in our own private dramas and forget to tell people that we value them. During those stressful and distracted times, it helps to get a little nudge from somebody who hasn't forgotten—a practical reminder that if you put good energy out there, it'll come back to you.

Maybe we should commemorate Roger's passing by doing what Roger did, not just for me on that particular, difficult morning, but for many people he valued throughout his life: tell them you care about them.

That you love them.

That their work has value.

That their life has value.