"Do the Right Thing" was released 25 years ago today, in the summer of 1989. The warm months formed the beating heart of one of American cinema's greatest years, right up there with 1939 and 1999 (maybe "nine" has some talismanic power?); and Spike Lee's third feature, about anger and misunderstanding and racial tension on a block in Brooklyn, was one of the very best things you could see on any screen. It was part of a mini-flowering of independent and independent-minded cinema that temporarily interrupted the 1980s glitz-and-cocaine-fueled, "Flashdance" and "Top Gun" and "Rambo" doldrums, and made adventurous viewers feel, for a fleeting instant, as if they'd time-warped back to the 1970s. That was a time when it possible to make commercially accessible, substantive films that were artistically innovative, sociologically astute or both, but that never felt like homework; films that were engaging, seductive, surprising, and ultimately as compelling as the louder, simpler genre pictures they often opened against. "Do the Right Thing," "Born on the Fourth of July," "Drugstore Cowboy," "sex, lies and videotape," "Heathers," "Sweetie," "The Cook, The Thief, His Wife and Her Lover" were all 1989 films that fit the description. They played in commercial release in major cities. All who fancied themselves film fans had to see these movies; otherwise they couldn't participate in the arguments they provoked.

Now that Lee's drama has aged out of that awkward period ten to twenty years after first release, when "hip" viewers snicker at haircuts and fashion and music rather than engaging with the work itself, we can see it as something more than journalism in handy cinematic form, which is how most major media outlets presented it. The film draws on then-current events (like Lou Reed's great album "New York," which feels in some ways like its spiritual companion) and invokes the names of citizens killed by police, both in its dialogue and its onscreen imagery. There's a "Tawana Told the Truth" mural (If you don't know the details of that sorry scandal, look it up, kids) and a mural positioning a new-ish heavyweight named Mike Tyson as a homegrown folk hero. But it's not about what was happening then. It's using what was happening then as a window into what has always happened, and continues to happen.

When I think of this movie or re-watch this movie, I remember Pauline Kael's line about "Citizen Kane: "It's more fun than any great movie I can think of." "Do the Right Thing" is harrowing, sad, painful and often hard to watch, and its final act is tragic, and yet the word "fun" definitely applies to it. The movie is not "fun" as in light or trivial, but "fun" as in "exciting" or "stimulating." Lee and his collaborators (including cinematographer Ernest Dickerson, who shot his first five movies and his student shorts as well) have calibrated every moment for maximum impact. There's laughter and sex and scenes where people clown around and bust each others chops and one-up each other. The colors pop. The music is LOUD. The camera often veers into Dutch tilts, sometimes as a means of conveying disorientation but just as often for comedic effect, as if the movie itself is quizzically cocking its head at the spittle-flecked demands of Lee's characters. If it's a cautionary tale about anything, it's the dangers of putting one's vanity first. Fragile egos lead to fights, riots, arson. The real killer here is pride. 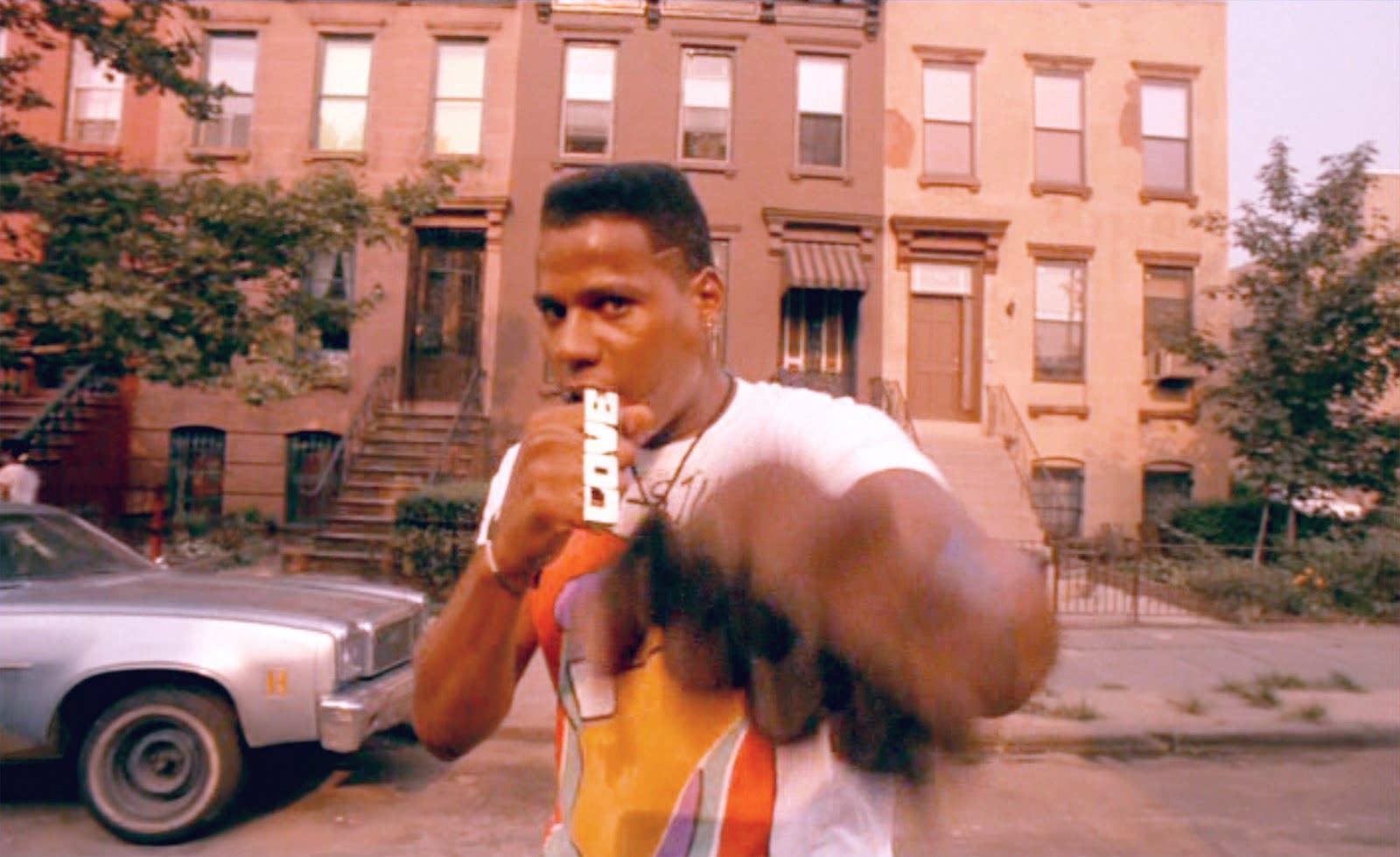 Like Oliver Stone, whose great "Born on the Fourth" came out later that year, Spike Lee is a dynamic and sometimes impulsive public figure who's eager to share his political opinions with anyone who'll listen. So it's no surprise that his statements about this particular film—specifically that he sided more with Malcolm X than Martin Luther King in the battle of the final quote crawls—have been confused with the message of "Do the Right Thing" itself. Audiences are notoriously bad about separating art from artists; when the artists are themselves pundits of a sort, they have even more difficulty doing this.
Advertisement

But the fact remains that there is nothing in "Do the Right Thing" to suggest that anybody anywhere in it did the Right Thing, or the Wrong Thing. They just do things. They act. They react. They lose their tempers. They grow resentful and paranoid. They sweat. The heat is murder. They are animated by wounded pride of one sort or another—racial, ethnic, macho, sexual, paternal, maternal—and they can't resist preening and puffing out their chests and jabbing fingers in each other's faces even when there's no good reason to act that way.

Look at the young mother of the child that Da Mayor heroically saves from being run over, who lectures him about how she won't have anyone question how she raises him, "not even his daddy," or the man in the Cadillac who gets sprayed with water by neighborhood kids and has the cops on his side until he lets his furious entitlement spill over into I-pay-your-salary condescension. Everybody in the movie has at least one moment where he or she reverts to jerkdom and lectures somebody else—often somebody who doesn't really need or deserve a lecture, not at that point anyway. Lee is hip to the unfortunate truth that everyone wants to be the star of his or her own movie, swaggering around telling people how it's gonna be; even the people who fancy themselves quiet and reasonable and above that sort of thing might have that tendency, and in big cities on hot days, they come out of the closet as troublemakers, making trouble. And here's "Do the Right Thing" showing us what happens when we act that way in life, without consideration, without judgment, without common sense—when we give into passion and just spew, like those characters in the instant-classic montage of racial slurs. This is not a "realistic" movie in any geographic or historical sense. It's a hothouse (pun intended), a microcosm, a hip-hop "Our Town" complete with a Stage Manager character (the DJ Mr. Senor Love Daddy) who narrates the whole story, dropping wisdom, cracking jokes, and spinning the platters that matter, the matters they platter. 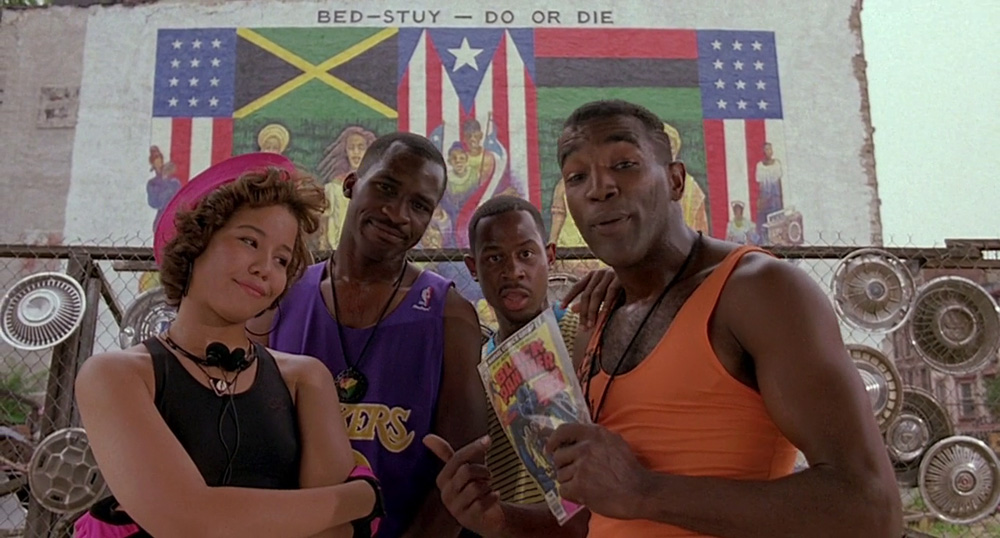 But here's the most important thing to remember about "Do the Right Thing": it's fair-minded. In fact it might be the fairest film Lee has ever directed, in terms of its willingness to consider the position of every significant character that passes in front of its lens, and its unwillingness to assign exclusive or even primary blame for the chain of events that culminates in the death of a young black man and the torching of a neighborhood business. I've been thinking about this film for a quarter of a century and I have yet to convince myself that any particular person anywhere in the narrative "started" the chain of events that results in the death and the fire.
Advertisement

Maybe if Buggin' Out hadn't opened his yap about the Wall of Fame, or maybe if Sal had given him a polite but dismissive hearing instead of shutting him down completely, or maybe if Radio Raheem hadn't come into Sal's with his boombox blasting that first time, or if Sal's older son Vito hadn't interrupted a deep conversation with his dad to go outside the pizzeria and yell at poor Smiley (who joins the trifecta of "protestors" at the end), or...dammit, here I go down the rabbit hole again, even though I just said what a terrible idea that is! It's a testament to both the political intelligence and visceral power of "Do the Right Thing" that you keep getting pulled into the Blame Game as you watch it, rather than simply chalking up the tragedy to differences between people and groups that may (we fear) be irreconcilable.

It's also a testament to "Do the Right Thing" that it never, ever, indicates that you should think about the film's events either as a chain of self-popping firecrackers or as a fuse that somebody lit. As many critics have observed, this is a film of dialectical tensions expressed via dialogue, image, sound and music, and they never reconcile or come to a conclusion or otherwise "end." Racist/not racist, love/hate, peace/violence, Anglo/minority, man/woman, productive/unproductive, day/night. The entire structure of the film is circular, beginning and ending at dawn, on the same street. The final image is a crane-up of the main thoroughfare, young people racing around each other throwing a basketball, circling, circling, circling.

Here's a video essay about "Do the Right Thing" that I did for The L Magazine five years ago, for the film's twentieth anniversary. It gets into the theatricality and rhetoric of the movie. Thanks to Roger and to The Chicago Reader critic Jonathan Rosenbaum, both quoted in the piece, for helping me shape my arguments. For a full transcript, click here.