We Have to Recognize Ourselves in Films: Gabriela Cowperthwaite on "Megan Leavey"

Gabriela Cowperthwaite’s documentary “Blackfish” showed us that the orcas performing tricks at SeaWorld were in severe distress. Her first narrative feature film, “Megan Leavey,” is another story about the complicated but profound workplace relationship between a human and an animal, based on the true story of a Marine Corporal and a specially trained, very fierce dog named Rex. They worked as a team searching for bombs and weapons in Iraq, and they saved many lives until they were injured in an explosion. After she left the military, Leavey insisted that Rex be allowed to live with her, two former warriors still caring for one another after their service was over.

In an interview, Cowperthwaite talked about how her experience as a documentarian helped her tell this story and the changes she and star Kate Mara insisted on to stay true to Leavey’s perspective.

What did you bring to this film from your perspective and experiences making documentaries?

You get quite a bit more support in narrative films, production-wise, so that was nice. But what I brought from documentary, what I hoped to do, was to make things feel authentic. There’s a spontaneity that comes from documentary, when someone sets up something the right way, when someone says something unexpected, or something happens in a scene between two characters. When that happens in a documentary, it’s beautiful, it’s a moment, and it feels like magic. Sometimes a challenge for me with narrative is that you have to almost engineer that.

And so I was trying to bring some spontaneity to a scripted film. I was trying to make sure that as a crew we were agile and spry, light on our feet, so that when Megan had a moment or Rex made an expression or any of the other characters ad-libbed, we were prepared to capture it. To me that natural realism and authenticity of character is beautiful. It’s why I love film. So I try to bring that from my documentary world into this world.

How does that affect the way you work with actors?

I know what real is. I know what it feels like. I know what it looks like. And so, as a director, it’s almost like I’m giving them the freedom to find their lines authentically and to be able to portray characters that resonate with them so it can come naturally. Sometimes it has to do with getting out of their way. Sometimes it has to do with letting them go off script a little bit. I can encourage that element of performance and I think actors are by and large appreciative of that. 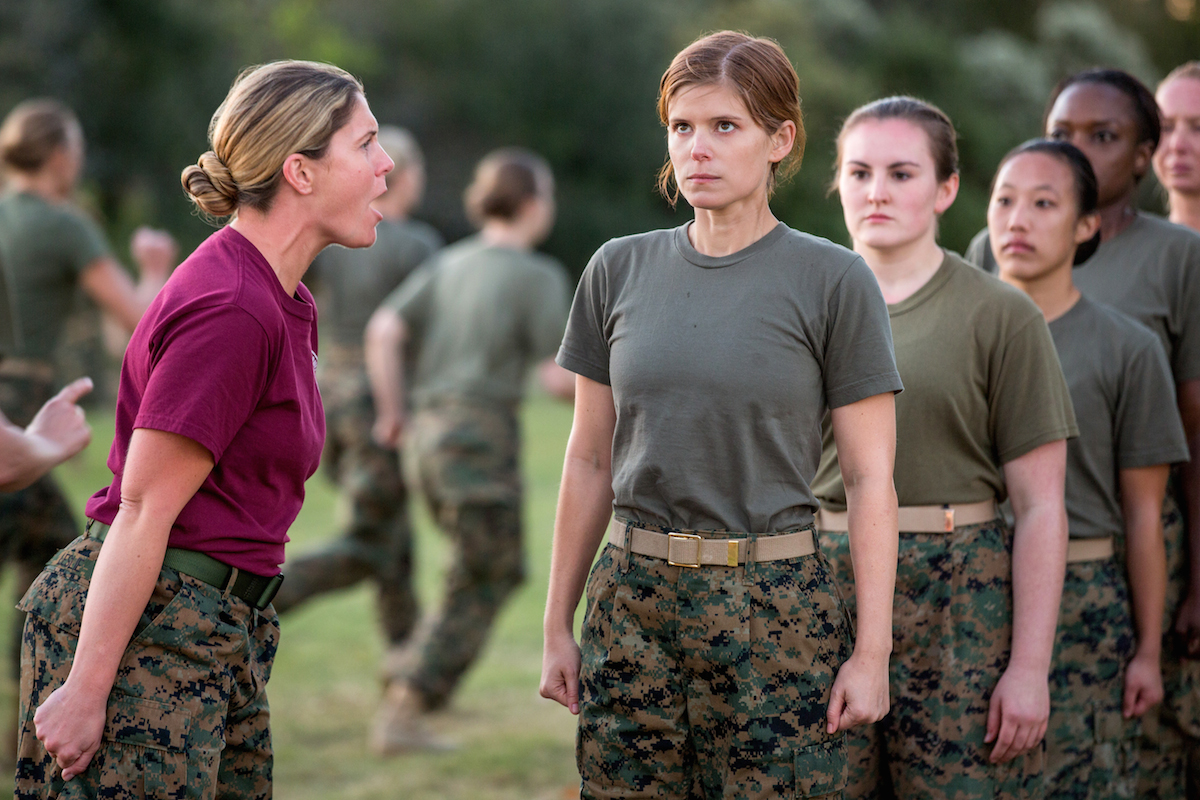 Was Megan Leavey around while you were filming?

She is on screen. She plays a drill sergeant in boot camp. She’s really mean and super effective. She’s awesome! She was also around for part of the filming, including the beginning boot camp part of Megan Leavey’s journey, and for the beginning of Kate’s journey in the role. That was incredibly helpful. She read the script and weighed in on it so she was aware of everything. She saw a cut of the film only a handful of months ago and of course we were on pins and needles. She ended up loving it, so thank goodness for that.

One challenge of the film is that you have something like four separate chapters in different locations, each with its own arc. How did you manage that?

It’s challenging because you are telling a true story so you can’t go crazy trying to make it this tight little narrative. But we tried to make it as digestible as we could, keeping in mind that point A was Megan as a teenager who does not have a lot of prospects, fired from her job, loses her friend, flunked out of school, and then we see her have this life revolution, each chapter finding her stronger and better understanding what she wants, ending up fighting the hardest she has ever fought to try to bring back the animal that saved her.

To depict that trajectory, showing she is 180 degrees different at the end than how she starts out in the film, to be able to effectively portray that, you want to hit these chapters of her life. The first time she really works for something is to even be in the Canine Unit since it’s an elite unit and she’s not really fit for it yet. Then she is deployed and has to work to protect her fellow Marines and take care of Rex, too. We watch her work for something and then come to love herself for the first time through loving something else. And then she has a final challenge, not just her recovery but also her fight to get Rex back. You don’t just get to waltz off into the sunset with Rex; Rex is going to be redeployed because he’s going to be used as a weapon in the war. So now you’re going to have to fight to protect him and to convince the world that you are both better with each other than you are without. So yeah, it’s a bit of a hefty undertaking to hit all of it properly but it was important to me to do it so that you could understand how someone could have such a crazy trajectory. 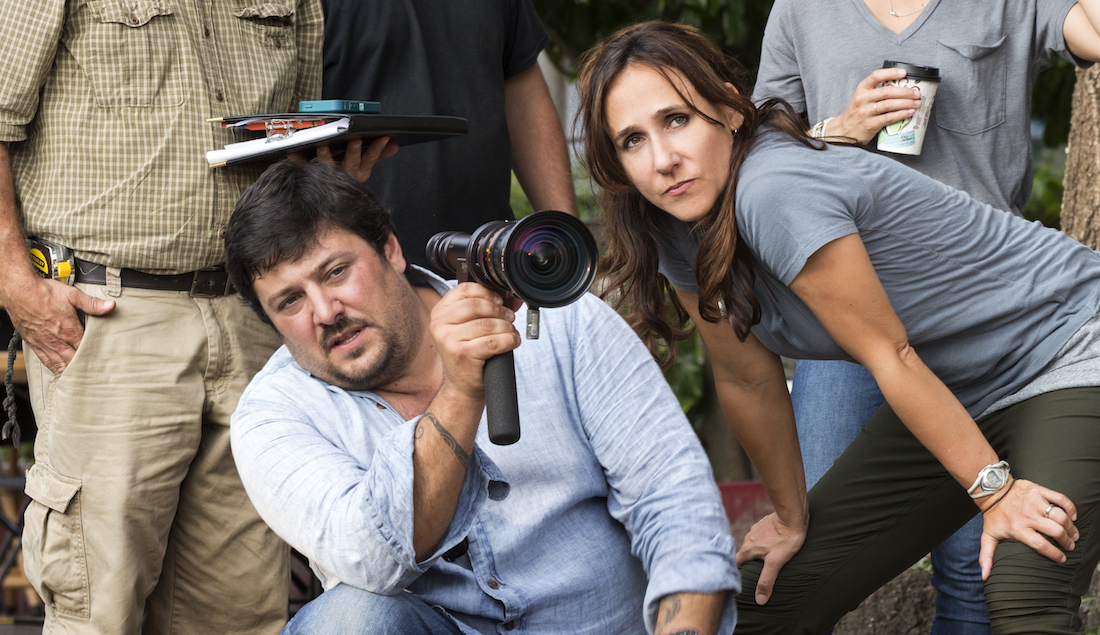 It is unusual to have a movie about a woman on active duty in the military story and it’s even more unusual to have it directed by a woman. How did that affect the story?

I was hoping to have the story live in what I call the in-between moments. There are these set pieces like boot camp and the combat war scenes and the checkpoint scenes. There are the big muscular action-y scenes. But it still has to be about the characters. Even though a scene seems like it is about the enemy launching the mortars and some of the more tactical action movie type scenes, what I thought was interesting was what Megan and Rex are doing in the context of that and how he’s not leaving her side and how she’s not leaving him. They are tethered.

There is something emotional that makes those scenes impactful because you know that they are bonded now. You know that they fought to be there. That bond is so well earned on both of their parts that it becomes excruciating to think of either one of them getting hurt. So, to me that’s the soul of those scenes and I don’t know how someone else might have directed it but I do think that is something that was particularly important to me.

Kate and I were really, really on par with each other that way. It’s important to me that she didn’t fall head over heels with the guy on base. It is important to me that he was more emotionally available than she was and that ultimately when it doesn’t work out and they both understand the timing wasn’t really there. I just love that. And that was a rewrite on my part. There was a version where they end up all happy together and the film is just not about that. That was me, Kate, and one producer. A lot of that had to do with the women involved.

As women we have to look at these protagonists and these female characters and think to ourselves, “Oh yes, that’s me, that could be my friend, that could be a sister.” It’s so often that this is just not the case. We just don’t find ourselves in these films even though there is a female character with a female name and she’s doing things in the movie. You just look at her and go, “That’s just not like anybody that I know or have ever known,” and it’s because it wasn’t depicted by a woman; there wasn’t a female on the set for miles or a female in the writer’s room or a female who had final cut. We have to recognize ourselves in films and that is what we wanted to do with “Megan Leavey,” for the real Megan and for those of us who will see her story.