This is Not a Political Issue: Bonni Cohen and Jon Shenk on "An Inconvenient Sequel"

He warned us. Former Vice President Al Gore says that the angriest responses he got to the Oscar-winning documentary “An Inconvenient Truth” were about an animated sequence showing that the sea level rise and storm surge would someday put the 9/11 memorial site under water.

“An Inconvenient Sequel" does not need an animated model to make that point; there is real-life footage showing people wading through knee-deep water at the memorial site, as New York Governor Andrew Cuomo describes the “undeniable” impact of climate change.

And yet, some people continue to deny it. So Gore is back again with an update, still scary, but giving us some hope. In an interview with RogerEbert.com directors Bonni Cohen and Jon Shenk talked about what makes them optimistic, including increasing business and politically conservative support for sustainable energy sources—and the ever-renewable energy of Al Gore.

How does anybody keep up with Al Gore?

JON SHENK: We’re mortal human beings with a mainstream amount of energy but Al Gore outlasted us every day. The guy somehow has a life force and there were many days where he was raring to go at the end of the day and we just had to say, “Okay, then, we’ll just keep shooting.”

How did making this film change the way you address the issue of climate change?

BONNI COHEN: We have had solar panels on our house for 10 years and we are talking about getting more, we drive an electric car, we eat sustainably. We live in San Francisco, which makes it a little easier to do those things than in some places. What we really are trying to do day to day now is to wake up every day and think about more activist behavior—what we can do to move the needle on the climate crisis, whether it is calling legislators or trying to win the conversation with someone who might not see the issues the way do.

Your scenes about the Paris Accords conveyed very vividly how substantive and how fragile the process was.

JS: When President Trump made his announcement about withdrawing the US from the Paris Climate Accords, we thought, Oh my God, he has not explained to the American people and maybe he does not understand the history and delicate work that went into creating the first-ever global climate treaty. The work has been going on for decades at the UN level. Finally, after years and years, the developing world and the developed world were able to agree on a way of going forward, mostly because the French structured the negotiations in such a brilliant way. It provided an incredible framework that does not solve the problem on day one but has a review and ratchet system so every country will review its commitment every five years, and there was great hope to lead to 100 percent reduction in carbon emissions by the end of the century. The amazing thing about it, one of the key factors we touch on in the film, is the opportunities in solar and wind and the economic upside for countries and economies that build those factories and create those jobs that create the energy of tomorrow. That’s why you see leaders in places like New York and California and in Georgetown, Texas stepping up and embracing the technology.

Is there significant leadership outside of government? 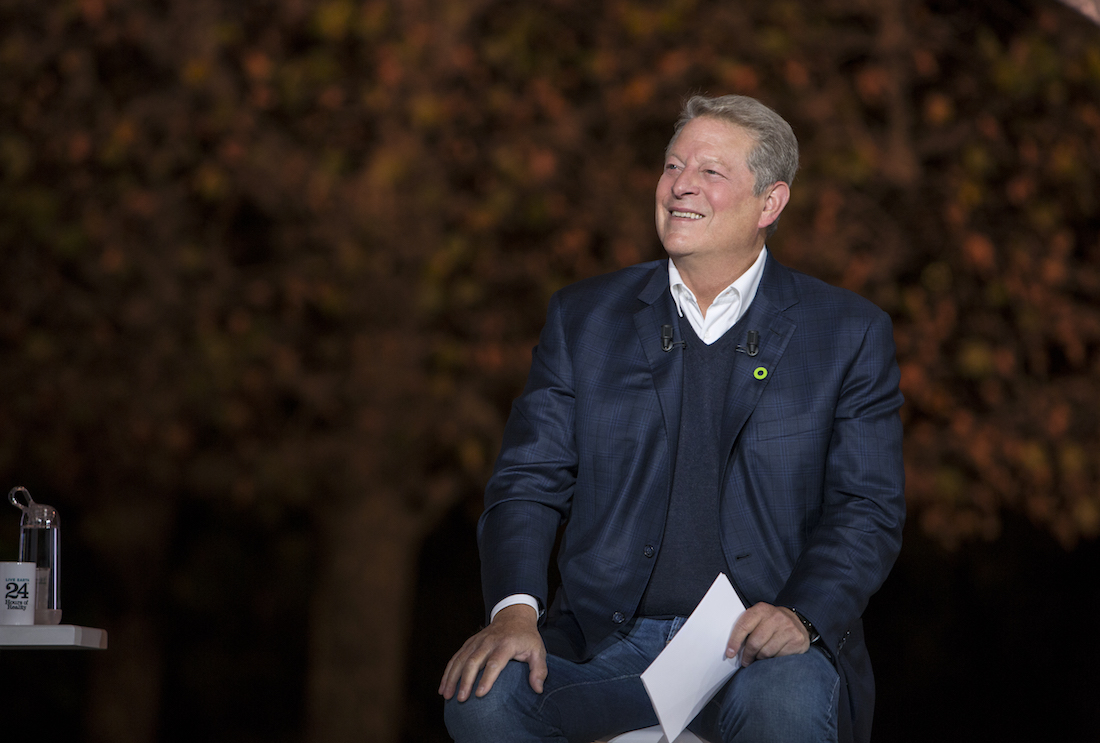 As filmmakers, how did you determine the best balance between scaring the audience and giving them some hope?

JS: We see ourselves as filmmakers and as storytellers. We want to make films that move people emotionally. The most effective thing that cinema can do is get into people’s hearts and have them see a new perspective on life—step inside someone else’s shoes and mind for 90 minutes and experience the world in that way. Take them away, make them laugh, make them cry, all those things movies are good at. We also think they can be incredibly effective ways to see social issues through their characters. That’s why we make movies about remarkable people like President Mohamed Nasheed of the Maldives in “The Island President” and Al Gore in this film, who get up every day and are driven in an almost inhuman way to make a change in a problem that they see in the world and shine truth into a very dark arena where bad actors try to lie to the American public to gain profits for fossil fuel companies. To us, that’s a natural drama. And that’s primarily where we work—character-based films that we hope will bring issues to life through their stories.

We were amazed and heartened that part of Al’s message is this incredible hope with sustainable energy that can help get us out of this mess we’ve gotten ourselves into. Bonni and I have teenagers and so it’s become more of an emotional issue. As Al Gore says in the film, it’s more like civil rights or women’s suffrage or apartheid than like a petty political issue. It’s of utmost importance to the future of the planet.

BC: The divisiveness that exists in this country, the partisan nature of the way in which the American population is forced to view the climate crisis—we have to get out of that. It is the existential crisis of our time. It affects all of us. As weather patterns change, it affects fish and crops. Farmers and fishermen are the constituencies of these legislators and they are going to be asking for something different.

Was there a scene you had to cut out of the film that we should look for on the DVD?

JS: We spent a lot of time on Al’s amazing family farm in Carthage, Tennessee, where he has hundreds of acres he inherited from his family. They had cattle and grew tobacco. So it’s kind of an interesting metaphor that he converted a piece of land to be a model for sustainable agriculture. It’s the most beautiful place. A river runs through the hilly, green farmland and he has planted trees in the pastures to control water runoff in a natural way.  The electricity comes from solar. They grow seasonal crops. They have a community agriculture program where they sell to neighbors and help feed their town. It’s meant to be a model to show that you can work in concert with the land and nature—and the food tastes amazing.

What happened to respect for expertise and scientific proof?

JS: When global warming became evident in the '70s and '80s, and more well known in the '90s, the fossil fuel companies literally hired the same PR firms the tobacco companies used, to help them safeguard their profits despite the fact that there was overwhelming evidence that their product could kill people. These firms have done a very effective job of confusing people and making them think this is a political issue that liberals care about. But this is not a political issue. In the film you see Al Gore meeting with a very conservative mayor in Texas who knows the truth, that solutions now exist to move in a cheaper way towards alternative energy and isn’t it amazing that it means our air is cleaner and we’re going to give a better planet to our children.

The other day, when Donald Trump was talking to the Boy Scouts, I thought about how one of the first things you learn as a Boy Scout is to be a steward of the earth. That’s something I learned in my conservative suburb of Cincinnati when I was a kid.

BC: More and more Republicans are turning over. We witnessed a conversation between Al Gore and Jerry Taylor, who used to run the environment section of the very conservative Cato Institute. He turned himself around and communicates the economic benefits of renewable energy. He says there are a lot of Republicans who are sitting on the edge of turning over because they have children and grandchildren.