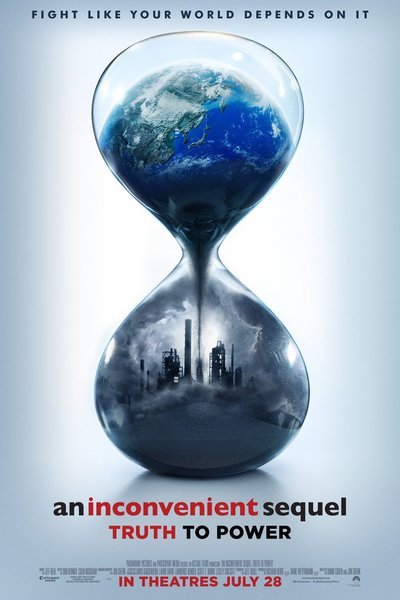 Rated PG for thematic elements and some troubling images.

There is no guaranteeing that you walk into a press screening with a clear head anymore. If you check your phone before walking into a movie, you're liable to read that a career senator took advantage of his office's health care plan, had a cancerous growth removed, then hobbled onto the floor of the Senate to cast a vote saying no other American deserves that treatment. How are you meant to feel anything but disgust when you then sit down to watch a movie about a lifelong environmentalist meeting staunch opposition from the planet he's trying to save? How is this movie not going to seem both more relevant and like a complete waste of everyone's time? “An Inconvenient Sequel: Truth To Power” (even the title screams for your attention over the horrifying din) chronicles a continuing and exhausting fight to get the world to stop destroying itself on purpose but it's also implicitly about the fight for your attention. Directors Bonni Cohen and Jon Shenk do their utmost to make Al Gore's climate studies seem like the life or death struggle they are, but they're racing a news cycle and the real-time destruction of our civil liberties, and frankly they don't want to play dirty enough to win.

We join Al Gore in 2015, looking a good deal older and tired. With his slow, awkward gait, gray hair and dad jokes, he's out of step with American politics. He's still giving his PowerPoint presentation on the effects of capitalism on the environment, with updated information. He wants to come off folksy, another Jimmy Carter selflessly giving whatever he's got to give to the country that rejected him, but his anger occasionally gets the better of him. Frankly, if he was angry more often this film might not be necessary. He's outmatched and outnumbered, and the best that can be said about him is that he hasn't given up. Of course, he's got time and money with which to continue his crusade to curb greenhouse gases. What about the rest of us?

This is a film set largely in board rooms and hotel rooms while the most powerful people in the globe talk to Gore about considering cap and trade measures to stop their populations from rampantly polluting the planet. Shenk and Cohen make a handful of calculated risks showing us who's in these rooms. A few years ago, choosing to show Cory Booker listening intently to Gore at a Senate committee meeting might have seemed like a good sign. Now that his ties to pharmaceutical companies have been exposed, his attention is just another empty promise from a bought politician. Watching Booker pretending to listen to Gore in one of many silent reaction shots the editors throw around Gore to make sure we know people are moved by his words; I just kept seeing the Jersey democrat embracing McCain on the floor after he voted to kill Obamacare. With friends like these …

Gore lopes through flooded streets and cemeteries like John Wayne in “The Shootist.” He's got tokens of past failures all around him, and every victory is qualified. He knows how flimsy his future is, even if he heroically refuses to stop. Watching him take in the faces of Floridian public servants smiling nervously as they admit that conditions have never been this bad and then sit and change his wet socks like a man returning from a bad day of fishing show Gore at his most human. Seeing him on a Golden cell phone dropping Elon Musk's name in the hopes of shaking people into taking him seriously show him at his most out of touch and desperate (Musk, it should be said, immediately went to work for Donald Trump when the call came, even if he retired in June). The film basically breaks even in its portraiture of Gore and his reaction to setbacks. The Paris terrorist attacks postpone a call to action broadcast. A small Texas town committing to using 100% renewable energy is undercut slightly by listening to the mayor say, "leave the world in better shape than you found it" and realizing he doesn't mean human rights. Hell, I was offered a 30-page press kit as I walked into this movie about the importance of recycling. How are we supposed to think this planet has a chance? The final minutes of the movie show Gore, ashen-faced, as he tries to rally his courage and strength after the 45th President is elected. His grief is eminently relatable, even if his composure is not.

The film begins and ends with arresting footage of glaciers melting. The problem is that those images have never been enough, final and incontrovertible though they may be. It's been ten years since “An Inconvenient Truth” first told everyone in black-and-white how doomed we are if we don't shape up. A lot of people listened, but just as many mocked him and encouraged us not to care. “An Inconvenient Sequel” shows the twilight of one of our most coherent champions. The glaciers have not stopped melting, every day brings worse news, but Gore has never given into despair. "Despair can be paralyzing," he says at one point, accidentally but appropriately sounding like Kyle MacLachlan in “Dune” (a story of a man trying to save an arid planet from corpulent fascists). Despair is all we've got some days, and try though it might, this film can't curb it. The best “An Inconvenient Sequel” can offer is the formidable image of Gore, nearly 70, refusing to stand down. It's inspiring, but even the filmmakers have to know it's not enough. I was moved by the movie, and then I stepped outside and looked at my phone.

A Box of Chocolates: Preview of the 2017 Telluride Film Festival

This is Not a Political Issue: Bonni Cohen and Jon Shenk on "An Inconvenient Sequel"

The Ebert Fellows on Sundance 2017