The Women of “Selma”: The Unsung Heroines of The Civil Rights Movement

Women have always played a pivotal role in the crusade for racial equality, but history  for the most part, has relegated them to the sidelines. While Rosa Parks and Harriet Tubman are some of the more recognizable names, there have been countless women civil rights warriors who have put their blood, sweat and tears into a movement, that at times could be quite patriarchal in framing the achievement of mostly male civil rights leaders. Director Ava DuVernay balances the gender scale in her new movie “Selma” by shining a light on these fearless, everyday heroines.

Giving a voice to the Black female experience is nothing new for DuVernay. Starting from her 2010 documentary “My Mic Sounds Nice” which focused on the contributions of female rappers to her 2012 feature “Middle of Nowhere,” the former publicist turned filmmaker has been a champion for women of color on both the small and big screen. Bringing the Black female narrative to a period piece like “Selma” was no exception. So DuVernay went to work re-fashioning the original script by populating the film with as many female characters as possible. “It was crucial for me to de-construct the script by stripping away the composite characters because the real characters are so fascinating you didn’t need to make anything up,” DuVerny explained. 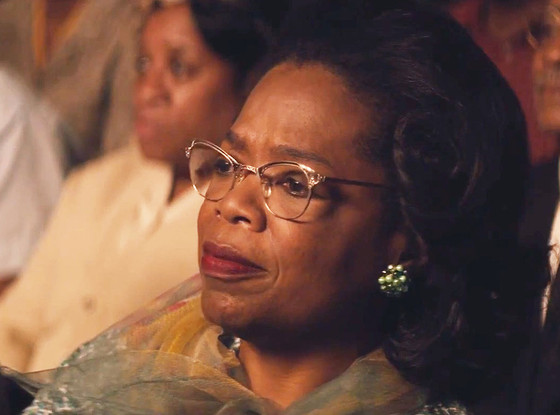 In doing research for “Selma,” DuVernay came across a rare copy of a self-published book by Richie Jean Jackson (played by Niecy Nash in the film), “House At The Side of The Road,” at a local bookstore in Alabama. “Richie Jean opened up her home to King and other men in the movement. In her book, Richie Jean talks about running her household, taking care of these men and even included a cabbage recipe that King loved so much.”

DuVernay also included Diane Nash (Tessa Thompson), a brilliant young strategist who co-founded the Student Nonviolent Coordinating Committee (SNCC) and was one of the driving forces behind the Selma Voting Rights Movement. Lesser known is Amelia Boynton (Lorraine Touissant), another civil rights leader who extended an invitation to King to lend her hand in Selma. “That’s why you see Boynton in the hotel lobby greeting him when he gets attacked by that Klansmen."

Annie Lee Cooper, who made national headlines when Sheriff Jim Clark beat her with a billy club when she protested for the right to vote, was another important face of the civil rights movement. DuVernay convinced producer Oprah Winfrey to play Cooper when she showed her an article saying the centenarian spent her afternoons watching The Oprah Winfrey Show with a tuna fish sandwich.

One of the most crucial casting choices was finding the right actress to play King’s wife, Coretta Scott King. Carmen Ejogo, who had previously played Coretta in the 2001 HBO movie “Boycott” was on DuVernay’s short list of actresses she was considering for the role. DuVernay recalls “I purposely didn’t watch “Boycott” but I remember Carmen’s performance in Lackawanna Blues. There’s a scene where she has to give up her son and the expression on her face just broke my heart. I always hoped I’d work with her.”

For Ejogo, the chance to revisit the character was the opportunity of a lifetime. “I had no idea the movie would have this zeitgest effect, but I knew it was an important movie I had to be a part of,” said Ejogo. Taking matters into her own hands, the determined actress flew herself to L.A. to meet with the director and auditioned opposite David Oyelowo. “It felt really good in the room”, Ejogo remembers. “We did the jail scene and where Coretta confronts Martin over the tape and Ava even shed a tear afterwards.”  Ejogo received an email from DuVernay a week later, with a picture of her and Coretta side by side with the message “A dream come true.” 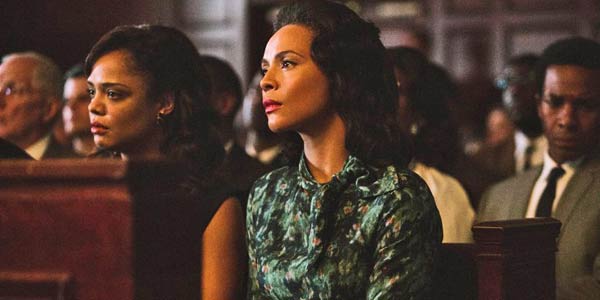 Choosing Ejogo turned out to be one of DuVernay’s best decisions.  Ejogo plays Coretta as more than just the decorative supportive wife; she articulates Coretta’s fears and frustration in a sometimes less than ideal marriage.  Broaching the the topic of infidelity in the King marriage didn’t present a moral quandary for DuVernay, “What is the context of the infidelity when you have to face the person you share your life with?”
DuVernay decided to use a different approach when tackling this sensitive subject:  “My perspective in writing this scene was much different than my male counterparts –they wanted to show what was on the tape, to see King with another woman.  As a woman filmmaker, I’m less interested in that and more interested in what does your wife say when you come home?”

The confrontation between Coretta and King is one of the film’s more quietly devastating scenes, and Ejogo relished playing the nuances and subtext DuVernay injected in their tense exchange: “The fact that you see Coretta is standing up by the end of the scene and Martin is looking up at her is indicative of where the power lies. In other scenes, you see her playing at being subservient and being in the background because that’s what’s expected of her.”

Ejogo goes on to say, “There were so many things Coretta had to put on the back burner while Martin was alive which was really so heroic of her. She was an incredibly powerful woman and Ava did an incredible job of giving her flesh, and making her three-dimensional and multi-layered. “