Songs from a Marriage: Zoe Lister-Jones on "Band Aid"

“Band Aid” is a quirky indie with a charming premise, endearing performances, and surprising emotional power. Zoe Lister-Jones is the film’s writer, director, producer, lyricist, and star in the story of an estranged married couple who begin to reconnect by turning their arguments into rock songs. She even used some of her own clothes as wardrobe. In an interview with RogerEbert.com, Lister-Jones talked about being inspired by her artist parents and why it was important to her to have an all-female crew.

In the film, your character and her husband improvise their songs on the spot. But what was your songwriting process really like?

I start with the lyrics. For the most part all of the lyrics were written as the story itself unfolded in the screenwriting process. And when I write them I generally have a melody in mind. I brought them to a friend of mine named Kyle Forester who I'd collaborated with a number of times on musical endeavors in the past. We made demos and then once Adam Pally and Fred Armisen were cast we started rehearsing as a band because we played all of the songs live. Now we've got an actual EP out and a music video, which is so exciting.

One thing I love about the film is the way it shows how vital it is for the characters to create art, for themselves and their relationship. Did you grow up with a lot of emphasis on the importance of expressing yourself creatively?

Definitely, yes. My parents are both artists. My mom is a video artist and my dad is a conceptual photographer. I was always being exposed to really interesting art and really interesting artists. I also was encouraged to just pursue any creative outlets that I so desired. There were just no limitations put on me as a creative individual. Even to the point where, when I was given a scholarship to go to Tisch at N.Y.U. to studying acting, I was apprehensive about pursuing the arts and it was my mom who was like, "No. You've got to go."

When I was a kid I would draw a lot and then I started working with clay and doing some pottery. And then I think I got more into acting. I always loved creative writing. I was big into short stories and I think that was something that for a while I thought I was going to pursue instead of acting. I think I was always trying new things. 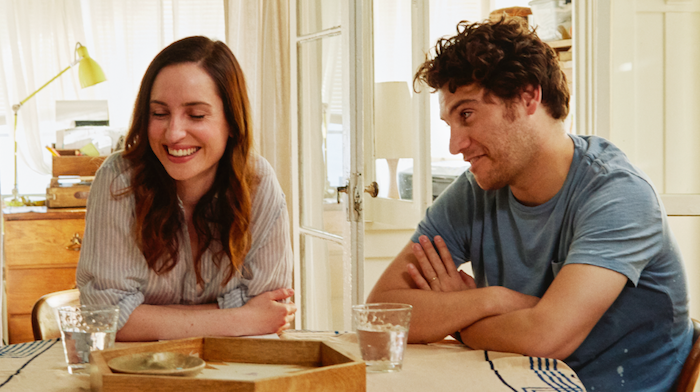 What do you think couples fight about most?

At least in my experience being in a heterosexual relationship, certain fights are drawn along gender lines that I notice pop up in my friends' relationships as well, which a lot of the times come down to sharing a space. Obviously the movie kind of revolves around a fight over dirty dishes. But I do think that dishes are big and cleanliness and attention to detail come into play a lot. And then just the way that two people process things very differently often creates conflict. So I deal with this in the movie, but I think our hormonal cycles as women lend itself to a certain emotional narrative every month. I think men can be more categorical in the way that they process emotions and sometimes those two things can create conflict.

Why did you insist on an all-female crew?

First and foremost, I just wanted to see what it would feel like to make art with other women and exclusively so. It's so rare that there are even a handful of women on a crew, let alone an entire crew made up of women. So I just thought that it'd be really interesting to see how that lent itself to the creative process. And then I also was very aware of the under-representation of women on film and TV crews and I wanted to create opportunities for women in departments where they are very rarely afforded them.

How did that affect the production?

It was amazing. It exceeded my expectations and expectations were already pretty high. It was just a really distinct energy and everyone who came on set immediately acknowledged it. All the extras who came on set for the first time would be like, "Whoa. This is really different and cool." It was just a very calm and patient and gracious community of people making work together. It really did give a communal energy to the work. And it was on top of that just super efficient and productive which is maybe the biggest takeaway.

How did the men in the cast relate to that experience? You had two of my favorite actors in the movie, Fred Armisen and Adam Pally.

They loved it. Adam now says that he only wants to work with all female crews or female dominated crews. There were many days where he was the only man on set. He talks about it now as something that changed his life and changed the way that he relates on set now because he views this gender inequity through a different lens. So I think it was really interesting to hear his and Fred's perspective on it. They both were so supportive and excited by the experience.

Your main couple in the movie is arguing all the time, so it is a very funny contrast that the group next door gets along so blissfully.

Maybe that could be the sequel as we get into the nitty-gritty of Fred and his roommates.

Was it a challenge to direct yourself?

As an actor you learn a lot about what direction works and what direction doesn't because you're the recipient of that direction. So I think that's hugely helpful in the transition from acting to directing. I guess the thing that I learned most is just that it's really important to be active in your communication with actors as a director and to inspire choices that the actor can almost think that they've come up with themselves. Less is more in a lot of ways. That's the thing that I always am aware of when a director is over directing. It's rare that you feel a director is not directing enough. Because I think generally actors do like to feel that they are finding choices independent of taking direction, at least in my experience. And then the shaping of the performance can be much more nuanced.

It came quite naturally to me. Maybe that's because I think as an actor you learn to self-direct. That's a big part of being an actor is tracking the arc for oneself and shaping one's own performance. Being in scenes with scene partners, you learn a lot from the way that you are relating to those people in every moment. It felt very organic. I think that directing and acting are really symbiotic. I really enjoyed the experience.