When you think about it, there was no real reason that 2001’s "The Lost Skeleton of Cadavra" could, or should, have worked. Ever since the then-young Harry and Michael Medved contrived a certain brand of B-movie consciousness with their "Golden Turkey" books on "bad" movies, and connected "Worst Film Festival" events, filmmakers, and fans turned filmmakers, have discovered just how difficult it is to capture or even simulate the je ne sais quoi that makes a genre potboiler of the sort that film fans regard with an equal combination of stupefaction and admiration/affection. The Medved breakthrough was followed by more sophisticated published curation of such material: Michael Weldon’s seminal "Psychotronic Encyclopedia of Film," the Re/Search compilation "Incredibly Strange Films," the John Waters tributes to Russ Meyer and Herschel Gordon Lewis in his classic book "Shock Value."  That’s another thing about what can no longer be called "bad" movies: there’s a wide variety of them, and the stories behind them are incredibly varied.

What made "Lost Skeleton" a delight, and won it a loyal cult that appreciates it in multiple repeat viewings (the real key to cult success) is that its originator, writer/director/actor Larry Blamire, is a genuinely funny writer who also has a super-solid story sense. The narrative of "Lost Skeleton" is kind of a Frankenstein’s monster of '50s sci-fi commonplaces and implausibilities (including an unseen villain with a distinct problem with motivation: his catchphrase is "I sleep now!"), but within its pastichey parameters it holds together. Blamire is also a canny enough filmmaker to be able to sidestep the trap of what undergrads used to call "intentional fallacy"; his stuff invoking the weird likes of "The Creeping Terror" while avoiding the actual tedium into which those incredibly strange movies can fall. His hilarious casts, including Blamire spouse Jennifer Blaire as the "reow-er" cat lady Animala, and expert character player Brian Howe, are invaluable in selling the conceits. 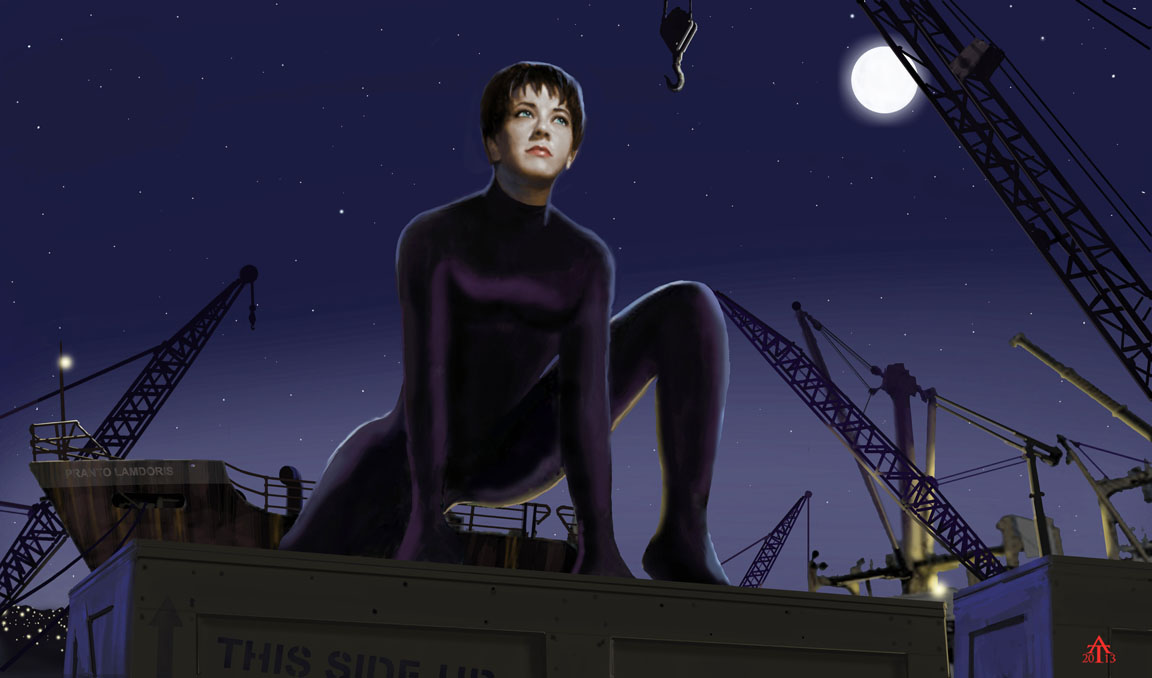 Blamire has made two "Lost Skeleton" movies so far: the 2001 first, followed in 2009 by "The Lost Skeleton Rises Again." Now, as today’s cult moviemakers tend to do, Blamire is taking to Kickstarter to fund the completion of the trilogy. "The Lost Skeleton Walks Among Us" (shades of the conclusion of "The Creature From The Black Lagoon" triptych) will feature a "giant monster battle," according to the pitch, which can be found here:

I’m a fan of Larry’s stuff, and, full disclosure, my old friend Michael Schlesinger is a producer on "Rises Again" and Larry’s Old-Dark-House tribute "Dark And Stormy Night," as well as Larry’s alien-mutation movie "Trail Of The Screaming Forehead." I recently posed a few questions to him via email, and our exchange is below.

What's the nature of the "Lost Skeleton" cult? How do you think the cult movie has evolved in the post-midnight-screenings home video age?

I think despite technology the basic grassroots feeling of the cult film has stayed pretty true, including in some cases the embracing of a notoriously bad film.  It just occurred to me, "The Lost Skeleton Of Cadavra" might be the only "family friendly" midnight movie out there.  It's been ten years since its release and it was a very gradual process.  By far the scenario I hear the most--and my favorite--is the fan who invites friends or family to watch the film and gets them hooked.  Fans are delighted to do this, and so are we.  In some cases they buy a batch of DVDs (the original's now out-of-print by the way) and give them out as presents.  It's like an infectious disease.  Only good. 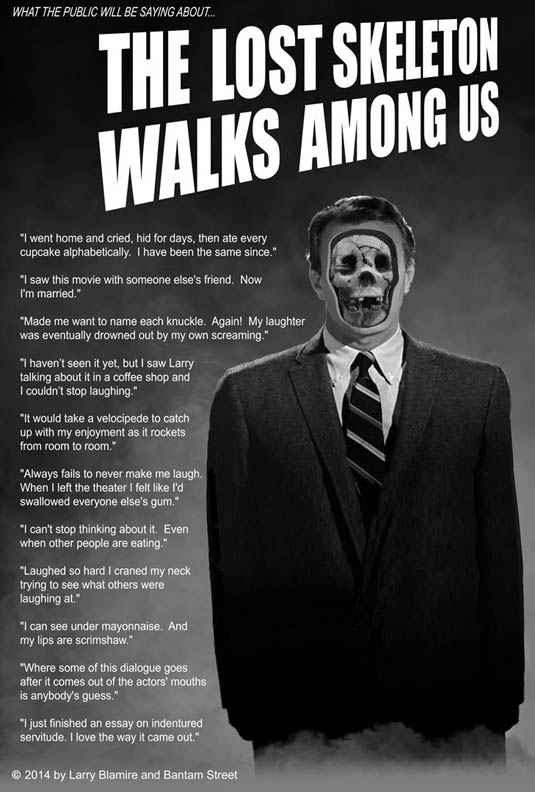 What's the finest line you have to walk in creating these movies? In the "MST3K" model, the humor derives from the wisecracks directed at the movie's own "bad" or skewed qualities. With the "Lost Skeleton" pictures there's an awareness that genre sendup is in itself not enough; the strong narrative line has to be there to keep viewer engagement. How do you keep those two components in balance?

I'm of two minds.  One is the adult wiseass looking to see what heights of the absurd I can reach, while the other is the 8-year old in me who wants to be intrigued by story, even immersed in the mystery of things.  This could happen with the lowest grade Z sci-fi horror movie when I was a kid--I could still get sucked in.  As silly as we intended "Dark And Stormy Night" it was important that there actually be a mystery and a (fairly) logical solution, even a bit of genuine claustrophobia.  As ridiculous as "Trail Of The Screaming Forehead" is I still wanted the audience to sense the isolation of the three heroes as the town is taken over by alien foreheads.  The same way "Airplane!" was carefully superimposed over the old movie "Zero Hour."  If story isn't there then you're just stringing gags.  The finest line we walk I think is in the acting.  We have an ensemble that understands that they need to believe in what they're doing, as opposed to playing "bad".  It's tricky.

What have been the challenges of keeping the creative team behind the pictures intact...if that's in fact the case?

Brian Howe is shooting his third episode of "The Newsroom", and we could easily lose him to a series at some point.  This goes for all of our team; cast, DP, Production Designer, Costume Designer, and so on.  Scheduling is always tough.  Everybody's doing stuff.  Plus we have some high profile cameos slated for this one; Michael McKean, who's on Broadway, might be tough to get for even a one-day shoot in LA. 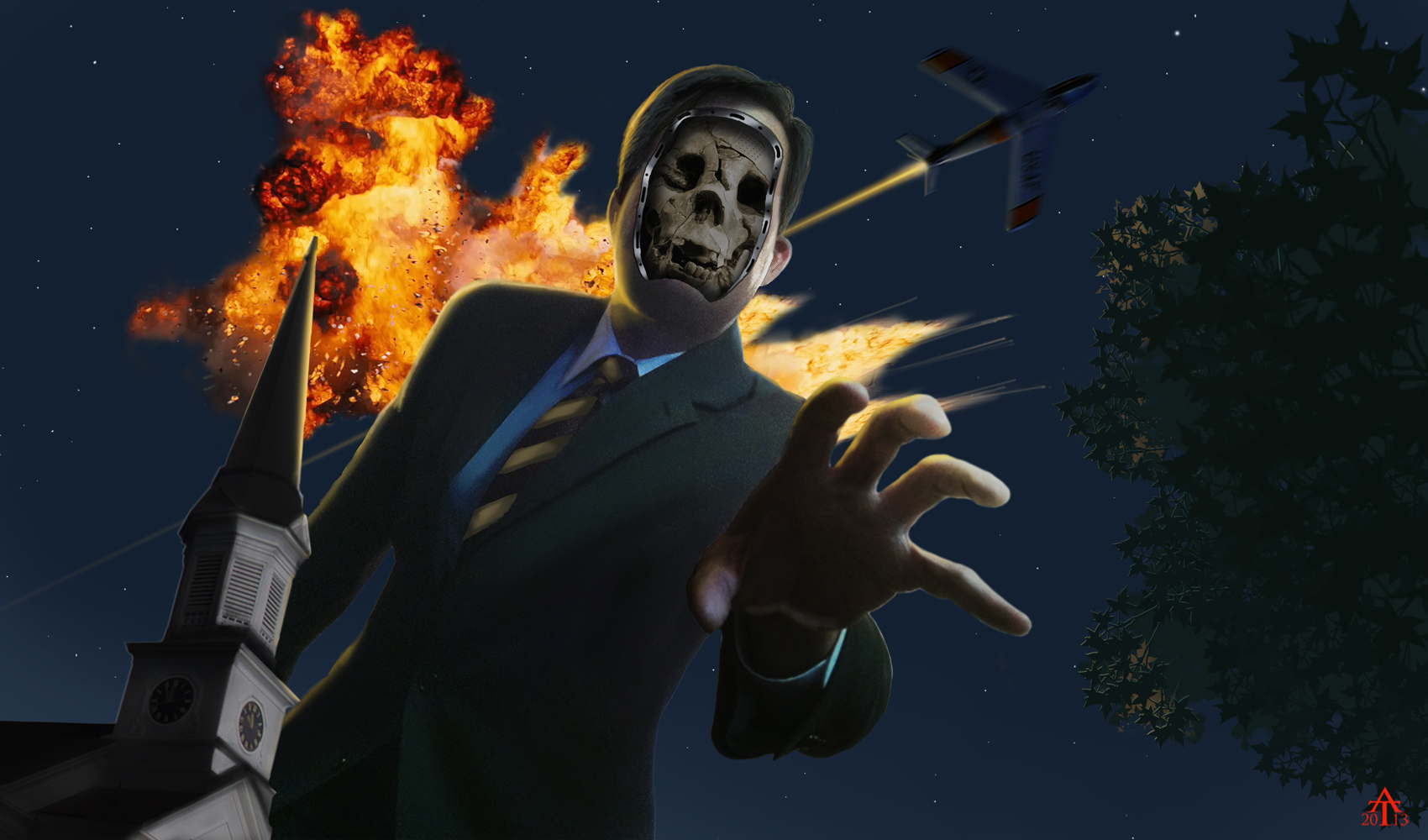 $400,000 is a fairly large amount of money for a campaign of this nature. What are your ambitions for this new movie?

You know, 400k feels like a large amount of money and sometimes like a drop in the bucket.  Both "Dark And Stormy Night" and "Trail of the Screaming Forehead" were more than twice that.  We really tried squeezing that figure down as much as we can, but large cast and numerous scenes/locations made it impossible.  The good thing is we're going to distribute ourselves and cut out the middle man.  For an indie that really seems the way to go these days.  We would like to use this film to expand our audience, particularly kids/families.  There are few genre films these days appropriate for all ages, and I am been continually surprised by parents telling me their kids love our movies.

You also create graphic novels, have just started a column in the great "fantastic video" magazine Video Watchdog, and do a bunch of other stuff. When do you sleep? Is it now?

Yes!  I am sleeping as I type this--man, it's so obvious isn't it?  Yeah, I have my longtime "Steam Wars" project happening, partnered with Jeremy Frommer and Rick Schwartz, starting with graphic novels, eventually leading to film.  The first is complete, and I painted the cover.  Plus, Brian Howe, Dan Conroy, Alison Martin and I have been creating a series of audio comedy "Adventures of Big Dan Frater" based on their "Forehead" characters.  My VW column is a blast, writing about great guest star roles from vintage TV.  I like to do too many things.  I heard yesterday that my play of "Robin Hood" is being done at the Williamstown Theatre Festival in July and I immediately wanted to write a new play.  But I can't--I've got this Kickstarter to promote.  It's insidious.  And I've got folks waiting for my second book of horror-western stories.  If you scream in print will anyone hear you?