Reason to Be Optimistic: The People Behind "The Yes Men Are Revolting"

So far, the activist duo the Yes Men have been the subjects of three documentaries. The latest one, “The Yes Men Are Revolting,” is quite a departure. Directed by Laura Nix and the Yes Men themselves, it reveals their vulnerabilities and touches on their personal lives for the first time. Their previous films have concentrated on their pranks and actions, along the lines of impersonating the CEO of an oil company and declaring to an audience of reporters that it’s going to generate energy solely through solar and wind power from now on. “The Yes Men Are Revolting” is even a bromance of sorts, tracking the ups and downs of Andy Bichlbaum and Mike Bonanno’s friendship over years. (Those are not their real names.)  Superficially, “The Yes Men Are Revolting” shares some common ground with Michael Moore and Morgan Spurlock—at least in the sense that it wants to combine progressive politics and comedy—but it has an honesty about its subjects’ failures and problems those ego-driven filmmakers would never shine a light on.

Was it difficult to shoot a film in the middle of protests and the kind of actions the Yes Men do?

ANDY BICHLBAUM:  It was not. There were so many cameras at Occupy, for example, that we just blended in. They were like a fashion accessory. People were incredibly open. The whole thing was about talking to the public. So shooting things in the middle of protests was pretty straightforward. Doing actions at Occupy Wall Street was rewarding because you automatically had a few dozen collaborators. If you came up with an idea, you had people who wanted to work with you on it. Other people have ideas on things you can join in. It was really the most delightful shooting experience in the film.

What about some of the earlier actions?

LAURA NIX: Every action was totally different. The shooting strategy for each one comes together in a mix of very strategic planning and whatever the hell happens on that day. It’s hard to say because each one is so different from another. Some have one camera, others have four. The action at the end of the film has four cameras. Sometimes it’s all about “Can you even get one camera in the room?” There’s a lot of planning and then you think on your feet.

Much of the film plays like a “bromance.” Were you thinking of fictional comedies as models?

LN: I was. I definitely looked at a bunch of buddy comedies. I like the way those are subverted in this story. It’s important to me in having their friendship be a subject this time around, because I’ve never really seen a film about a long-term friendship between a gay man and straight man. You don’t see that in mainstream film at all. I wanted that to be a component, not that it centrally defines them but that it’s part of their characters.

AB: I didn’t look at the bromance movies. For me, the point of the bromance and its failure is what rescues us, which is social movements. That’s kind of the whole message of the film. Being part of something bigger than yourself is what you’ve got to do. We wanted to show our evolution, with our personal story and our troubles. We find a resolution in joining a bigger movement. That’s the message we want to convey to the audience.

Does that resolution still work for you?

AB: Yes. We’re sill working with other people as part of a movement. Right now we’re working on the drought in California. We’ve been doing it for a long time, but with Occupy it took on another dimension.

How did you team up with Laura?

AB: For this film, we wanted to bring out our personal stories. It’s hard to do that working on your own. We’ve known Laura a really long time, so it was natural to work with, her. 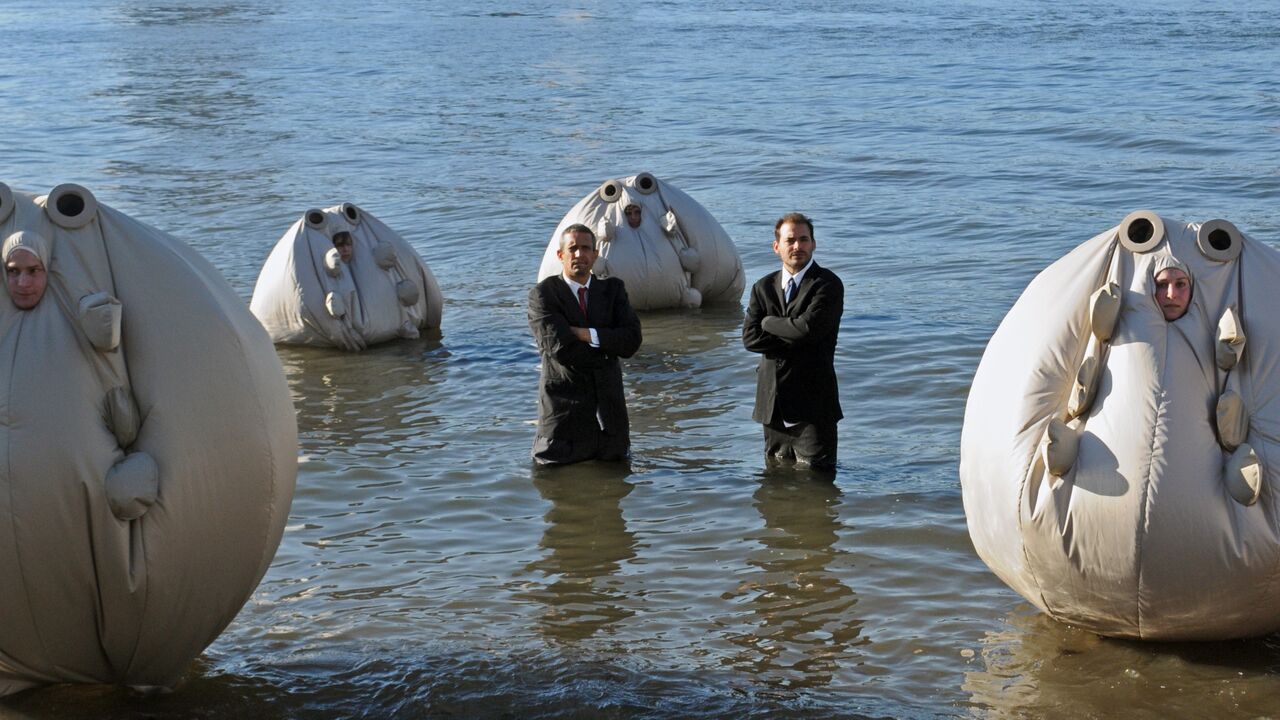 Do you find that you get recognized in your actions?

AB: Yep. That’s why we’re launching Action Switchboard. We actually don’t get recognized that often in conferences. Sometimes we wear little disguises, like the wig at the Homeland Security conference. The audience at these conferences is typically not the audience that watches our movies. But we’re also launching this platform, the Action Switchboard, with a training site that launches July 28th, the Incubator, where people can follow on-line an eight-week workshop to craft their own action. Maybe this film will make us so famous we can’t do anything ever again.

MIKE BONANNO: The other thing is that when we get recognized it’s funny to watch. When someone busts into the room and says “You’re not the CEO of Shell or Exxon,” it’s funny. Just as long as we get a little bit of our message in first.

Were there any legal issues involved in revealing your real names?

LN: We talked about that with the lawyer and he didn’t think so. Their real names are also widely available in the world, like if you google them or look at their Wikipedia page. It’s pretty easy to decode.

Have your employers ever had any issues with your actions?

AB: I was hired by the New School  and NYU as a result of the actions. For ten years, I taught how to make an impact on the media and how to think about social movements as things that are speaking to large numbers of people.

MB: What about Monsanto?

AB: There’s one exception. We did an action in Mexico, pretending to be Monsanto. They were applying for a permit to grow genetically modified corn. They were eventually denied it by the government, but we sent out a press release as Monsanto promising great things and saying we were preserving Mexican culture from destruction. Monsanto complained directly to the president of NYU and said “You can’t do this. You have to crack down.” They demanded a private apology from NYU that they could send to the government of Mexico. I don’t know if it had any effect, since the permit was eventually denied. I don’t know if NYU apologized, because it was private. Also, the second-in-command at NYU was working at Monsanto before she came to the university. If they publicly apologized, so many people at NYU would’ve been up in arms.

The film reveals that you’re both Jewish. Although you’re not exactly comics, there’s a long tradition of socially critical Jewish comedy. Do you feel part of it?

MB: I don’t think we went into this thinking that we were, but over the years you realize you’re part of a tradition, including socially conscious Jewish comedy. It’s pretty hard to throw a stone in New York without hitting a Jewish comic. There’s definitely a lot of inspiration from people who have confronted the system pretty publicly  and vocally. Other comics in general, like George Carlin, have done it in a much straightforward way, knowing they were doing comedy. At first, we didn’t realize that. We figured out we were doing theater.

AB: I think we fit into the tradition of Abbie Hoffman more. He’s also a Jewish comic, in a way. His audience was social movements and he tried to rouse them.

MB: Paul Krassner, who worked with him, was an actual stand-up comic. Some of the Yippies were. It was a pretty fluid  boundary. ‘ 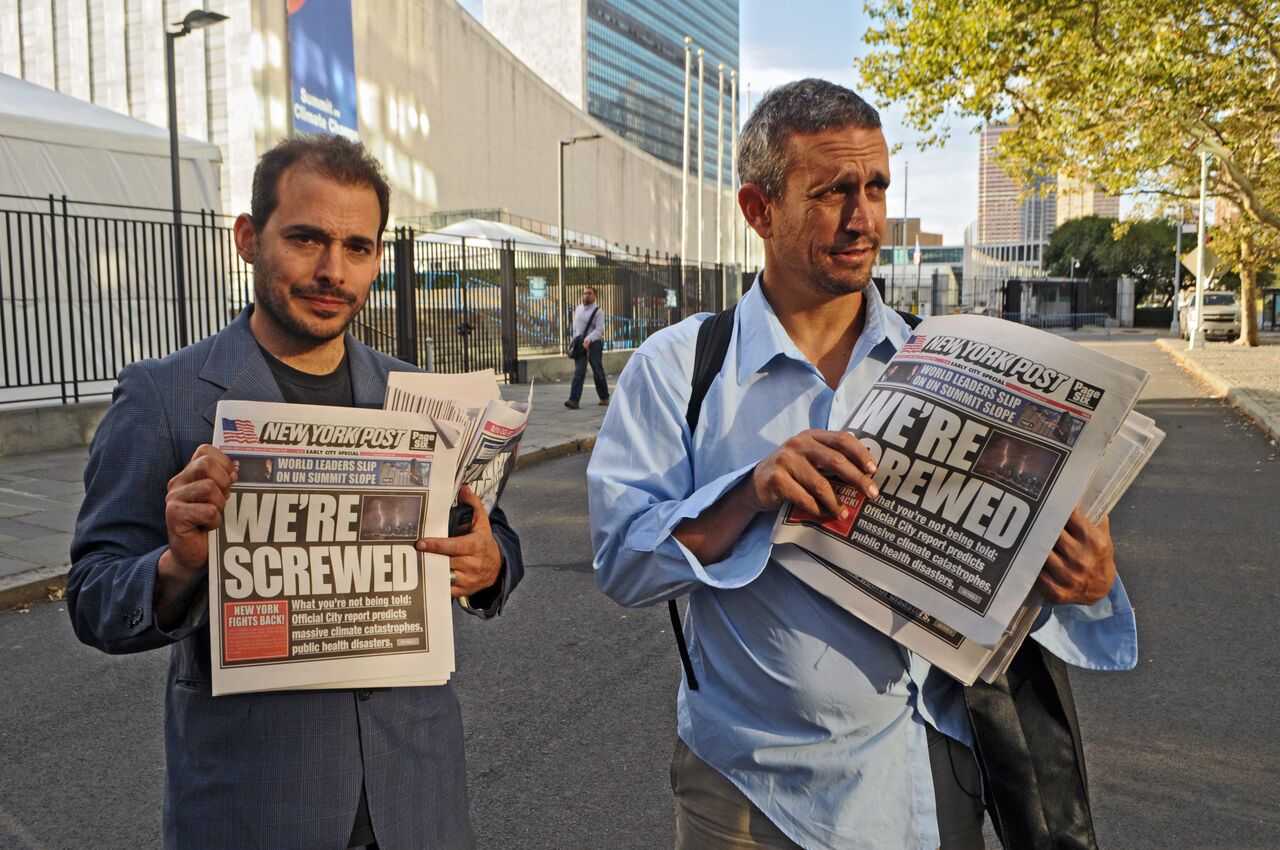 How’d you split up the work of direction?

LN: There’s some actions in the film the guys shot that I wasn’t there for. I’d also say that I spent a really, really, really long time in the editing room. They did too, but I was heavily involved in that aspect of it. I was a part of coming up with ideas for some actions. Many of the other ones I just shot and came up with ideas about how they were shot.

How long did editing the film take?

LN: It took a really long time. I don’t like to say it publicly. Two and a half years. Not all the time, but most of the time in that span.

Did the personal focus of this film make the process of making it feel substantially different from your first two films?

MB: We set out to make a different kind of film. I think that part of it was that, along the way, we were conscious of doing some shooting of our own lives. For me, a lot of the time I was away in Scotland, just turning the camera on myself. I didn’t have a cameraperson with me. That was a different way of shooting the film, because typically we’d be shooting the actions and mostly concerned with that.

I know this is a personal question, but it’s something you do delve into in the film. Andy seems extremely lonely for much of the film. Is that an accurate perception?

AB: Oh, no. You ’know, a problem with putting gay lives on film is that it’s a lot less obvious how to do it. I didn’t have a boyfriend for much of the film but I had a lot of friends. Those become your family. But it’s harder to show that. It’s easier to show kids and all that. The loneliness is easier to show. It’s different, but there was a lot more going on besides missing that boyfriend.

There’s a scene where you come out to a group of people in Uganda. Knowing the anti-gay laws there, even though they’re probably not going to prosecute Americans, was that difficult for you?

AB: Yes, of course. I think today {June 3rd} a longer edit of that scene is going to be up on Buzzfeed. We shot a lot around that issue. When we decided to go to Uganda, it was about climate change, but we realized their “kill the gays” laws was the most  notorious law in the world. We did look at climate change because that’s what we were there for. But I was determined to make some kind of statement. Coming out was an obvious thing to do. After meeting visibly gay activists in Uganda, it helped me overcome any hesitation I had. Meeting people who were remaining visible in the face of death threats made me realize that I risk little and owe it to them to say something.

Occupy Wall Street inspired you to return to activism. It very quickly turned into a sort of meme around the world and maybe had its biggest impact in Hong Kong. How do you feel about its trajectory?

AB: I feel great about it. It got everybody talking about inequality. It’s also manifested in other ways. You could say that the Ferguson #blacklivesmatter movement is also about the same things. It’s about inequality as well. You mentioned Hong Kong, but there were events in Turkey and Greece afterwards, Spain before. The activist movement in Spain is poised to take power. The effects are going to be felt over 10 or 20 years. You don’t feel change quickly. There’s reason to be optimistic.