Along with Boston Globe reporters like Michael Rezendes, Walter "Robby" Robinson and Matt Carroll, Sacha Pfeiffer was one of the true-life superheroes of the Spotlight journalism team who helped uncover the Catholic Church's history of sexual abuse incidents, an investigation that expanded beyond the greater Boston area to a worldwide scandal. Their efforts are the inspiration and blueprint for director Tom McCarthy's Oscar-nominated film "Spotlight," which comes to DVD/Blu-ray today before it vies for Academy Award gold this Sunday. Pfeiffer is portrayed in the film by Rachel McAdams, who was nominated for Best Supporting Actress for her performance as a vigilant reporter who struggles with how the investigation affects her own relationship with her church.

In 2003, along with her fellow reporters Pfeiffer won the Pulitzer Prize for Public Service. She also worked for Boston NPR, where she locally hosted "All Things Considered" and "Radio Boston," receiving an Edward R. Murrow Award for her on-air work. She is currently a reporter for the Boston Globe.

RogerEbert.com spoke with Pfeiffer about her experience working on Spotlight, how accurate the film's production and costume design represented her work experience, the internet's importance to Spotlight's story, and more. An exclusive clip from the "Spotlight" DVD/Blu-ray can be found below.

Let's start at the beginning, before Spotlight. What made you want to be a reporter?

I knew I wanted to be a reporter probably even when I was in high school, because I always loved to read and write, and that seemed like a job that would involve so much of that. And I was always pretty curious, and it seemed like one of those jobs where you’d learn new things and ask questions. What I love about the job is that it gives you such amazing access to fascinating people and places that so many people couldn’t get access to, and it also gives you license to ask questions that would be so inappropriate in any other setting. I just loved that it allows to do that. It’s a wonderful way to satisfy curiosity, and it’s also a wonderful way to do work that will have a pretty powerful impact in a good way.

My very first job out of college was at a newspaper in the south of Boston, and I went to the Globe from there.

What kind of cases did Spotlight tackle before the one examined in the film?

Well, Spotlight had been around since 1970, and historically did a lot of stories on crime and government corruption, crooked developers. The project we did before this one was about shoddy home construction, a luxury housing company that was making houses so crappy that you could cut through the walls with a box cutter. And then the project we did after that was about financial abuses in charitable foundations, so typically we’ll see people from wealthy families who will set up a foundation for benevolent, philanthropic purposes, but often it was a great way to put your kids on the payroll, write off fancy office space, fancy cars, fancy travel. We found one that wrote off a jet. So I thought that was a really great, high impact project, but nothing quite like the impact of this one. This impact did make us think differently about the types of projects we wanted to take on. We began to think more about disenfranchised people, victims and victim groups, people who didn’t have a voice. So for example, a later Spotlight team worked on people cheated by debt collectors, and how that could impact your life. And that was way before debt became more of a high profile headline. We began to focus on disenfranchised populations.

One of the most important aspects of this story is how it advocates putting a name and face to survivors of abuse. As a journalist, what do you feel is the importance of putting a name to these survivors?

In many ways, that’s just newspaper politics. Whenever we can print a name, it gives the story more strength than an anonymous source. Sexual assault is different, because in most cases if you’re the victim of a sex crime you’re not going to be identified unless you are willing to be. But we did have many people who were very brave and were willing to put their names to the stories. I think that was pretty heroic, because it made many people feel empowered to do the same. For so long there had been a stigma, and people didn’t want to say that they were victims. But I think our story, because victims came forward, empowered other people to come forward.

How accurate are the film's details in terms of costume design, or the room where Spotlight gathered?

The level of detail was incredible. I think that’s because all along the way, from the very beginning when the director and screenwriter came repeatedly to Boston to interview all of us for hours repeatedly, they allowed us to review the script and to just change it if the language didn’t seem authentic, or to fix things that were incorrect; even allowing us to be on set during filming, and to speak up when something didn’t look right. When I first saw our replicant newsroom that they built in an old warehouse in Toronto, I really felt like I was back in my office in Boston. But there was one thing that didn’t work for me. On Rachel’s desk, it was configured so that she would not have been able to type and talk on the phone at the same time. And as a reporter you have to be able to do that. So when I pointed that out to them, they brought in the set crew and actually changed the set. And we always called my grandmother, who is depicted in the movie, “Nana,” which is what people from south Boston and Dorchester call their grandmothers. The original script called her “gran.” That felt wrong to me for so long, and I didn’t speak up because I thought I would be a pest. Finally I spoke up and said, “If you really want Southie, Dorchester street cred, and you want to be authentic to what we call my grandmother, you should just say 'nana.'” They changed the entire script to call her nana.

The costume designer also wanted to know where we shopped, what we wore, and what our sense of style was. It was just amazing. They even tried to capture this slight wave in my hair that I didn’t know I had.

When you’re watching a reflection of yourself on screen, you’re a part of a phenomenon that not many people get to experience. I was wondering if you could put that into words as to what that feels like.

The go-to word is just surreal. The first time we saw it in a screening room, I don’t think we could even appreciate the story because it was so strange to watch yourself being depicted. I think the funniest thing is that, many of our family and friends had said, “They’re depicting mannerisms that you have.” And in some cases, they were mannerisms that we didn’t even know we had, until our family and friends pointed out that the actors were doing them. It was very strangely self-revelatory. 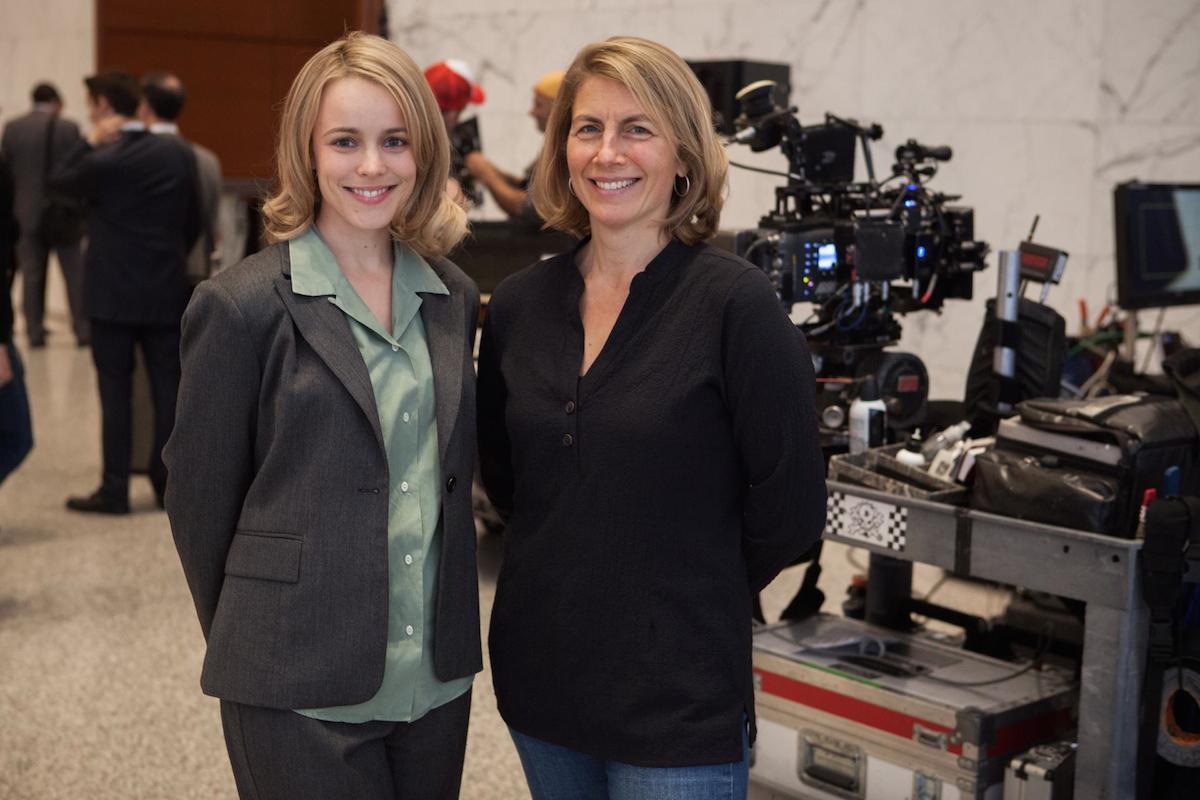 Among the small, important details in the film, there's that AOL billboard that ominously hangs over the Boston Globe building. It looms over scenes of the Spotlight team going through literal files, doing their research with paper. Do you feel if the internet were more prominent during the time of this case that it would have proven advantageous, or disadvantageous?

I think we probably could have found some information faster and more easily today. I also think there would have been more pressure to publish sooner, because if anyone caught wind of what we were doing, they could have jumped on the web and written about it. I think the competiton may have been tougher. We did really benefit though, because that was truly the very early days of reading stories online, and if we had published in the 90s, the only person that would have seen that story were the ones who would have got the Boston Globe home delivery. And instead, our story reached all around the country and across the globe. That meant that victims from all over the country were calling us, and verifying their stories. We were definitely not as technologically advanced at the time. But I think this was the first news story that went truly viral.

It seemed like great timing about where the internet was when this story came out.

Oh, yeah. It’s a little ironic, because the movie makes clear that we probably could have done it sooner. But if we had done it earlier we wouldn’t have had that reach. There was an accidental benefit in that delay.

The internet seems to be directly, cynically demonized as complacent in corrupting the integrity of journalism. But as long as journalism itself prevails, this technology can be used productively.

Exactly. And it also allowed us to take a lot of the documents that we got when we were able to get the court files unsealed—and we had access to the Archdiocese of Boston’s personnel records—we could put those documents online. Readers could read exactly what was in the file cabinets. If it had happened today, we might have put everything online. But then, it was a little more limited.

"Spotlight" is also about the art of an interview, of asking questions to get the most truth in the most natural way. So—what is the key to getting a good interview?

I think it’s basic that you have to be a good, compassionate listener. Not all reporters are good listeners, and you have to be genuine. I think that sincerity helps. You have to be protective of the people you are interviewing, and I think people end up sharing what you’re surprised to hear. And some people will look at that as a great scoop, and I think you also have to be hostile for that reason. I had one person who was one of the clergy’s victims, and he wasn’t going to tell his family. They were going to read about in the paper the next day. And I said, “Your family has to know before this is published.” You have that ability to protect people from themselves.

What did you think of journalism movies before “Spotlight”? Were you at all a fan of “All the President’s Men?”

I thought “All the President’s Men” was a great movie, but I also thought lots of movies and shows about newsrooms were so stereotyped and cliche. I don’t know that there are many that I’ve liked all that much, because they just seem like someone was sleeping with a source, anything that was almost a parody of what we do. What I love about ["Spotlight"] is that it doesn’t have that stuff. It shows the slow, painstaking development of relationships and research. It’s a really accurate portrayal.

That's one thing people seem to have really responded to. That it's a down-to-earth true story, about characters who really like what they are doing, and who they are working with.

On a good day, there is no better job than being a reporter and in particular a newspaper reporter. You are surrounded by such smart, interesting and curious people. And again, it was a wonderful team. We really did work that hard, and we also got to make impact in a good way.