Like a Raw Nerve: Davis Guggenheim on “He Named Me Malala”

Very few people could ever render “The Daily Show” host Jon Stewart speechless, but that is precisely what Malala Yousafzai did when she appeared on his program in 2013. At age 15, she was shot in the face by a member of the Taliban after vocally addressing the importance of educating women. She received rehabilitation at a hospital in England, the country where she and her family have lived ever since. Her championing of equality has led to the ratification of Pakistan’s first Right to Education Bill, and she has garnered numerous accolades, including the 2014 Nobel Peace Prize. Her courageous spirit in the face of fearsome opposition is such a profound inspiration to behold that a documentary seemed almost inevitable.

Davis Guggenheim, the Oscar-winning director of “An Inconvenient Truth,” “It Might Get Loud” and “Waiting for Superman,” has crafted yet another illuminating work with his profile of the remarkable young woman. “He Named Me Malala” is guaranteed to move viewers of all ages with its endearing footage of the author and activist as she shares her story with the world, while yearning to one day return home. Guggenheim spoke with RogerEbert.com about the experience of getting to know Malala, the film’s nonlinear editing style and the stoicism displayed by people who have survived the unthinkable.

“An Inconvenient Truth” succeeded in eliciting the same sense of dread that you had felt when you first saw Al Gore’s presentation on global warming. “He Named Me Malala” is equally visceral in how it reduces audiences to tears. How do you go about achieving this sort of impact as a filmmaker?

You’ve captured exactly what I want to do with my films. The more I work, the more I try to keep myself open like a raw nerve. When I feel things in a story, I want the audience to feel them as well. Too many documentaries are intellectual exercises. I want documentaries to be alive. When I feel the horror of Malala being shot or the romantic sort of longing that she feels—I want to capture all of those feelings onscreen. I’m much more in pursuit of visceral feelings. It’s very hard to do, and sometimes it’s almost impossible, but that’s what I’m all about.

It’s always a little different how I go about achieving that. Sometimes it’s about asking, “How do you simplify, how do you strip things of distraction, how do you cut to the core?” I do a lot of audio-only interviews at first just to capture a feeling and go deeper, as if you’re having the most quiet, intimate conversation you’ve ever had with someone you love. If I can get that tone of intimacy, then the film will have that. People are often more self-conscious when they’re on camera, and sometimes your eyes are the enemy. You watch a movie about a war veteran and you’re thinking about D-Day and Omaha Beach and a 17-year-old boy getting off the landing craft. Then you see an 80-year-old veteran [being interviewed] and all of a sudden you think, “My god, he’s old,” as opposed to how it feels to be on the landing craft. 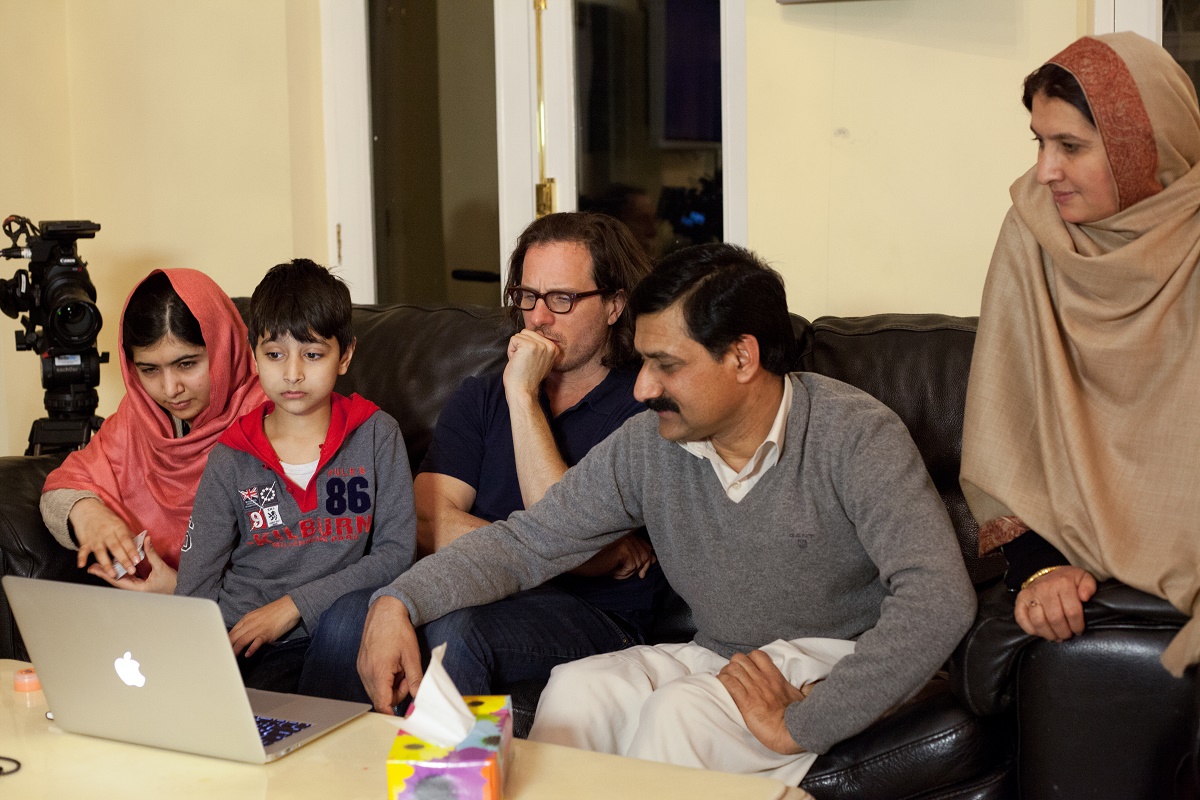 What was the experience like of spending time with Malala and her family?

I didn’t know who I would meet when I rang their doorbell. I’m half-Jewish, half-Episcopalian, and here I am ringing the doorbell of a Muslim family’s house in Birmingham, England. Would they let me in? Would they understand me, would I understand them? Like every documentary, it’s a process of gaining trust, but they were lovely people. They were so open and they immediately embraced me. I realized that their house is like my house. I’ve got three kids, they’ve got three kids. There’s a lot of laughter and a lot of teasing, and I wanted to capture that. There’s a danger in treating Malala like an icon, and I wanted to really get to know her.

The title of your film seems to reference the question of how Malala has been influenced by the views of her father.

My father [Charles] was a great filmmaker. He also made documentaries and he always said that the trick to a good movie is insisting that the audience do half the work. My job was to ask the question, “What is the nature of this relationship between Malala and her father?” I try not to answer it. I put the pieces out there for the audience to put together, though I know how I feel.

There’s a scene where Malala noticeably refrains from discussing painful memories during your interview. What do you think was holding her back?

I definitely think that there is some stoicism in Malala. It’s interesting when you talk to someone who has really been through something very, very terrible. They are less likely to talk about it. People who have had a bad day because their soup was cold can talk about their “suffering” all day long. I think Malala knows that there are many other people out there who are suffering right now in refugee camps. She feels like, “How dare I complain about my own pain when I have so much?” In many cases, the guys who brag about their war experiences weren’t actually there. The ones who saw terrible things are generally very stoic. I did an episode of “NYPD Blue” years ago that was about that. [Det.] Sipowicz goes after this other detective who is bragging about his war service, and it’s revealed that the guy didn’t actually serve. 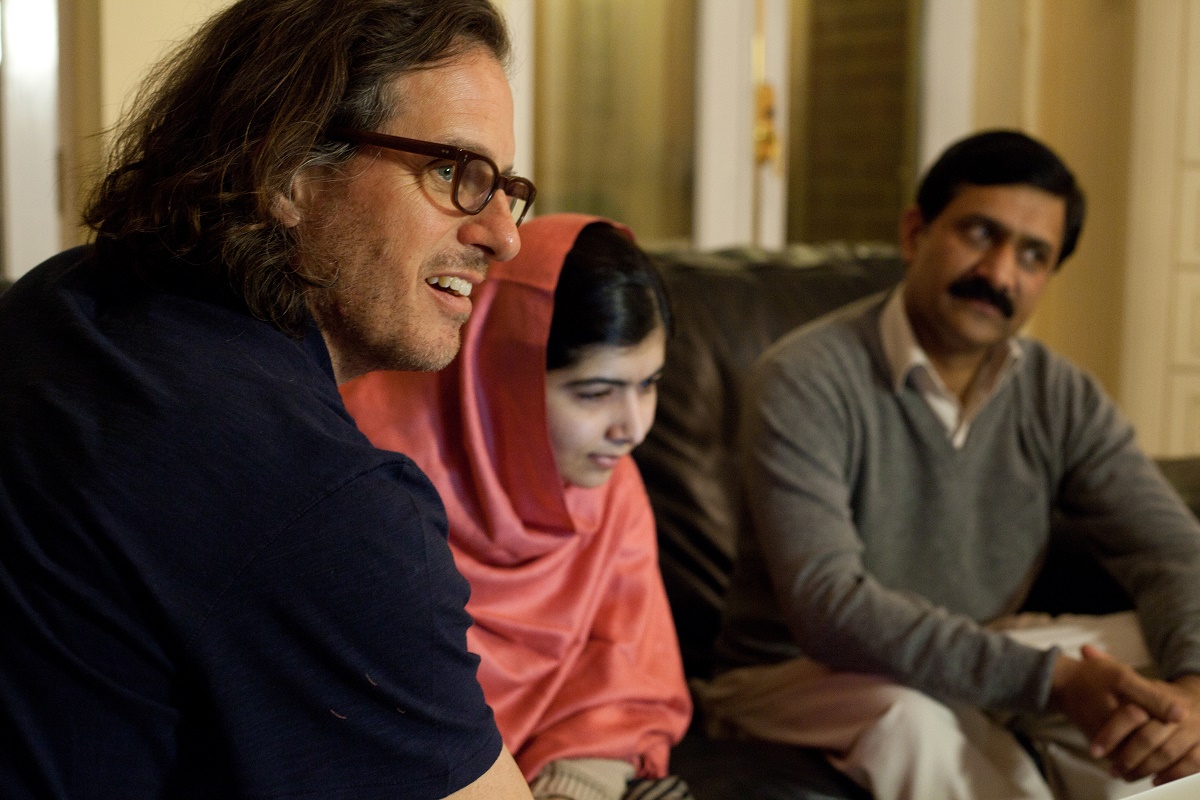 What inspired the film’s nonlinear editing?

The concept behind it was that the film is building toward a choice: the choice of a girl to risk her life and speak out for what she believes in, and the choice of a father to let her speak out. The process of editing the footage was very difficult and I wouldn’t recommend it. I’ve juxtaposed time lines in my other work. We cut back and forth a lot in “Waiting for Superman,” but this film was very nonlinear to the point where it’s sometimes unsettling. There were many, many versions of the movie where the editing didn’t work. I really owe it to [editors] Greg Finton, Brad Fuller and Brian Johnson. This is a very well-edited movie, and they are owed a lot of credit for the film’s success. It was really hard to get everything right.

Malala’s message of empowerment, which is shared by your film, transcends the sort of idealogical boundaries that all too often divide us.

I don’t have that in mind when I make a film, although I will be thrilled if that’s what it achieves. If you set out to make a movie that’s going to accomplish a particular goal, that’s a mistake. You see a lot of well-intentioned documentaries that are trying to do that. I simply wanted to tell a story about a father and a daughter and the choices that they made. On the other hand, think about what has been happening recently in our country. Donald Trump was asked a question about the "Muslim problem" in America. A boy made a clock and his school overreacted. We definitely have a problem with understanding Islamic culture in America. It was intentional on my part to gain an understanding of Malala and her family.

When you won the Oscar for “An Inconvenient Truth,” you said that you made the film for your children. Was it your intention to reach younger audiences with “He Named Me Malala”?

That was my hope. The other day, my daughter, Stella, had seen the film, and there was a [Q&A] where various adults were passing the mic around and sharing their feelings. My wife and I were surprised when my daughter grabbed the mic. She was the first kid to speak, and she had always been so shy. She said, “I don’t want to ever live in the shadows,” and my wife and I burst into tears. The idea that this Muslim girl who is 7,000 miles away from our home in Venice, California could speak to my daughter was so moving. You want your movies to play on you. If they start to move you and move your family, then maybe they can move other people, but it starts with you. You can feel when a director is deeply effected by a story, and you can feel when someone is emotionally or intellectually distant. I want to be in there and feel everything.

When my cousin, Jeremy Scahill, was nominated for his documentary, “Dirty Wars,” he felt uncomfortable with the attention he received on the Oscar red carpet. Do you feel a similar discomfort when promoting films about important issues?

I met Jeremy at Sundance. He’s incredible and “Dirty Wars” is a great film. And yes, I was feeling awkward earlier today when I was on the morning show, “Windy City Live.” Look at me, I’m like a long-haired, pretentious dude. [laughs] Documentarians are outsiders. I work in L.A., where the huge machine of Hollywood resides, but I like being on the outside of things.