Comic-Con 2017: Interview with Cast and Producers of Hulu's "Future Man"

Josh Hutcherson stars in the time traveling action comedy series “Future Man,” coming to Hulu on November 14. In an interview with RogerEbert.com at Comic-Con, the cast and producers talked about why it was important to them for the show to look like a feature film, and the movies and games that inspired them.

Executive producer Ben Karlin said the show was “custom-made or genetically engineered for the Comic-Con audience. It lives in the world of sci-fi very happily and wholly, and pulls from movies and television shows of the last 25 years, James Cameron, Robert Zemeckis, but very much its own show.” Seth Rogen, who produced and directed, said that the most fun and the biggest challenge was coming up with their own rules for time travel. “It was fun/excruciating, like that scene in ‘Back to the Future II,’ with a lot of conversations about whether if he went back here would there be two of him?” “The amount of white board space we took up with time travel logic was incredible, and we got a lot of help from a writer’s assistant who is the biggest time travel nerd,” Karlin added.

There is also a first-person shooter video game influence, Rogen said, with some “rough brutish characters that you think would be interesting to interact with. But the joke is that when they come to life they’re just horrible and want to kill indiscriminately and have no value for human life and come from a time when humans are all dead anyway and it would be very difficult to navigate working with them." 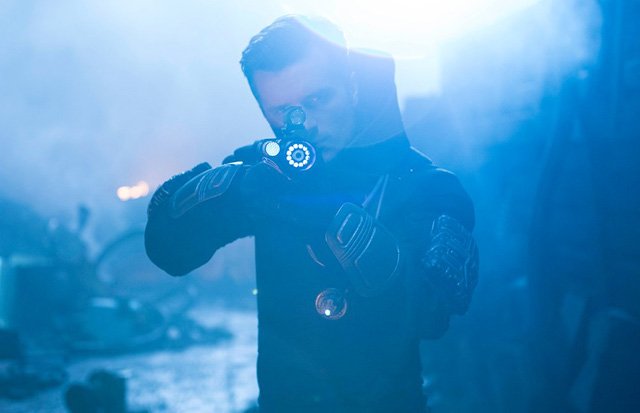 Both the producers and cast emphasized how important it was that they have feature film-level sets, costumes, and effects. Rogen said, “The plot, the story, we really wanted it to play out and have the texture of a big science fiction movie like ‘Back to the Future’ and ‘Terminator,’ which inspired the look and feel of the show. We found over the years that when you are doing a comedy that has a real genre influence to it, the more you do the genre, the funnier it becomes. We literally treated it like we were directing ‘Terminator.’ We filmed it with anamorphic movie lenses, and they’re going to broadcast it in full movie aspect ratio. Our production designer, Jess Kender, went way beyond anything we could have imagined. When I watch the show, I’m blown away by how big and crazy it is.”

“There’s nothing about this that’s a spoof or a parody. We wanted it to stand alone as a participant in the genre, although more comedic,” said Karlin, “though ‘Terminator’ is pretty funny.’”

Eliza Coupe (“Happy Endings”) and Derek Wilson (“Preacher”) play warriors Tiger and Wolf, who are from the apocalyptic world of 2162, and create a test to find someone from the past who can change the course of history. Wilson told us, “We live in a sewer and eat rats and garbage. So you get to see us try to save the world but also be affected by the experience of visiting other times.” He said that when Rogen’s writing partner, Evan Goldberg, called to ask him to consider playing the “most badass” character imaginable, he said yes before Goldberg finished the question, and did not really know the show was a comedy until later.

Coupe enjoyed the time travel scenes. “We have our warrior costumes, which are insane every day fighter gear. And then we have our everyday looks, when we go to different time periods. I travel way way back with all sorts of interesting hairstyles, and I go to the '60s and the '80s.” They did stunt training but not in any specific style of martial arts. “Yes, this is a comedy, but the stakes for our characters are so high that this is devastating. We thought we had a really cool plan and we come from the midst of battle. I have a very hard time understanding what a skirt is and why anyone would want to wear it. Seth and Evan were adamant and very clear that we don’t play comedy in this. My character is very on task and on mission and not making jokes. We’re making the plot move forward,” Coupe said. “It was like shooting an action movie a week.”

Josh Hutcherson told us he got to do some “crazy dancing” on the show. “The journey we go on is so nuts. One moment there’s a weird joke and then it becomes a whole plot point. That’s the ridiculous vibe. What’s crazy about the show is that it walks such a line of genres and tones. They have real life or death situations where people are very serious about saving the world and the fate of man is on the line, while you’re also doing something absurd, maybe involving dead possums, maybe not. The roundabout way that we end up trying to save the world is the funny journey that we go on.”