I’m not much for allegory, but when the allegory comes in a cinematic package as vibrant, momentum-charged, virtuosic, and just-plain-messed-up as Darren Aronofsky’s “mother!” does, I can roll with it, as they say. More than roll with it, actually. I was exhilarated and enthralled by each of the movie’s 120 minutes despite the fact that ultimately I felt only a limited affinity with what it was communicating.

That might not make sense to you and if that’s the case I’m sorry, because it’s impossible for me to reveal how it actually does make sense without giving out a bunch of spoilers, and right now this is a movie that doesn’t need my spoilers. If “mother!” catches on in the same way Aronofsky’s “Black Swan” did—and I suspect it will—cinephiles and other factions will be arguing about it all through the fall, and beyond.

The movie begins cryptically but viscerally with an image of intense pain and horror, countered by an image of calm: the movie’s male lead, Javier Bardem, placing an unusually shaped chunk of glass into a three-pronged display stand. At which point a whole small world comes to life. I was reminded of Jack Fisk’s character in “Eraserhead,” the pasty-looking guy who pulls the lever and sets the movie’s whole universe into motion. The world that comes to life from ashes around Bardem is a beautiful one. A stately country home in the middle of a lush field of grass, no driveway or cars in sight, and a beautiful young woman in one of the house’s many bedrooms. None of the characters in this movie have proper names, but it is not giving too much away to say that Jennifer Lawrence plays the title role, exclamation point and all.

Bardem’s character is a writer, a poet specifically. Along the way we learn he’s a popular poet who inspires his readers in what I inferred to be a Paulo Coelho kind of way. Lawrence’s much younger wife is furnishing and finishing the beautiful house. No TV, no cell phone, very few objects that suggest a dimension of ordinary reality, but soon into their idyllic existence a visitor, a self-proclaimed doctor comes with a hacking cough who’s soon even less explicably joined by his if-cheekbones-could-kill wife, played with great determined spite by Michelle Pfeiffer. Pfeiffer interrogates Lawrence with such hostility over the age-difference thing that I wondered whether her character was a writer for Jezebel, but no.

In addition to unwanted guests playing passive-aggressive games with her while her husband sits by seemingly delighted, Lawrence’s character is also visited by strange visions of things in the walls of the house, which she dispatches with some treated water. The tense, mordantly funny, determinedly odd scenes build and build until the movie blows up into a hallucinatory orgy of grisly visions that are also purposeful signifiers. Biblical allusions abound; there’s Adam and Eve, of course—“I wanted to make this place a paradise,” Lawrence’s character says ruefully at one point. There’s also Cain and Abel—“Is this a prequel to ‘Noah’?” I thought to myself—and the birth of Jesus. When Bardem’s character says to Lawrence “I finished it” I of course thought of Aronofsky’s own “The Fountain.” But this is not, in the end, a religious allegory. It is a study of madness that is steeped in madness, a hallucination that’s also an angry cry about the state of this world, but most importantly, a cinematic experience of unique proportions. 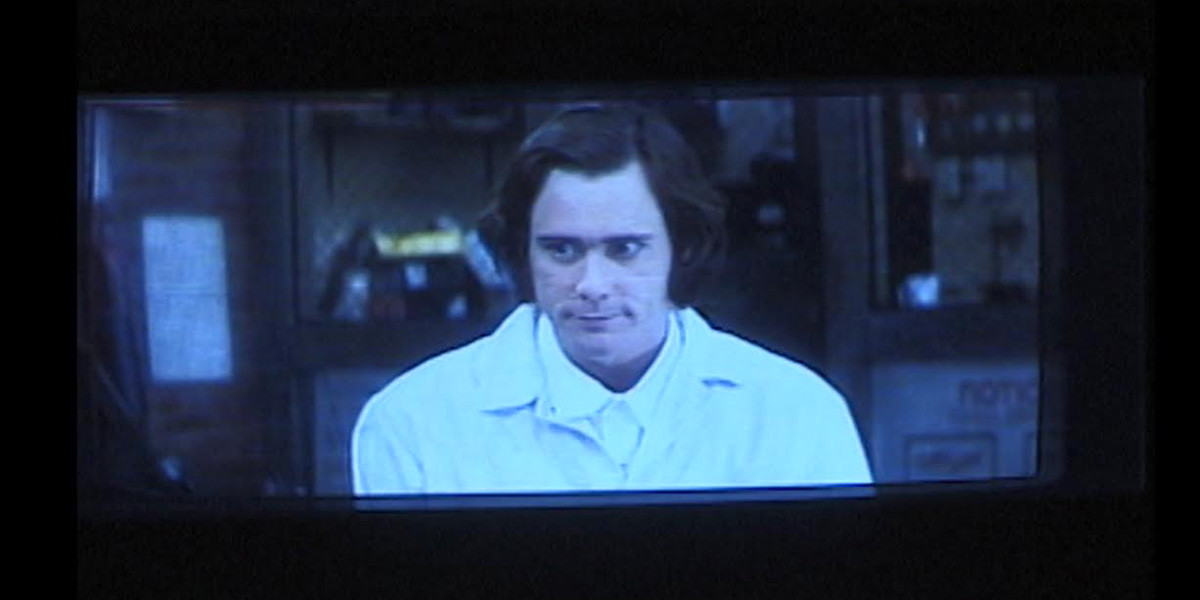 “Jim and Andy: the Great Beyond—the story of Jim Carrey & Andy Kaufman with a very special, contractually obligated mention of Tony Clifton,” which from now on will be referred to as “Jim and Andy,” is a movie based upon the truth of a rumor. During the making of the 1999 “Man on the Moon,” a biography of Andy Kaufman directed by Milos Forman, Carrey was reputed not only to have stayed in character while playing comedian Kaufman, but also played the more-alienating-than-Kaufman alter-ego Tony Clifton as if he were himself Tony Clifton. As Kaufman did. At least when Clifton wasn’t being incarnated by Kaufman creative cohort Bob Zmuda. If all this meta-unto-and-after-actual-death stuff registers for you, you will enjoy this deep dive into the making of “Man on the Moon.” Or, more properly, the making of “Man on the Moon” through the eyes of a reflective Jim Carrey nearly 20 years later. He’s the movie’s focus, speaking directly to the camera as if in an Errol Morris movie (this picture is the work of Chris Smith of “American Movie” fame but he used Morris’ Interrotron device for the interview), and telling of his obsession with Kaufman, his own twisted relationship to his self-willed success, and the extent to whether he took his Kaufman incarnation too far. This is buttressed by footage shot in lieu of an electronic press kit for the movie, showing Carrey staying in character as Kaufman.

On one level, the peculiar and often-objectionable behavior on display here looks credible. On the other hand, at no time in this footage is Carrey seen consulting a script or looking for a mark, which were things he surely needed to do.

Of course making you question how much of what you’re seeing is fake or real, or “fake” or “real,” was also the larger point of Kaufman’s work, so this project, aside from functioning as a made-for-display therapy session for Carrey (who has some peculiar demons and peculiar notions about them), also functions in a postmodern matrix of infinite reiteration. It also has a few laughs, thank heaven. I was always a sucker for that “Mighty Mouse” bit, and Carrey does do it almost as well as Kaufman did, and we get to see both here.