As the Venice Film Festival is held in Italy, it would stand to reason a good number of Italian films would screen here. And sure enough, of the 118 films on the docket this year, 24 of them are Italian productions.

However, that’s across the board. In the main competition there are four Italian pictures out of 21—not what you’d call an intimidating bloc. And Italian productions aren’t always Italian language films. Orson Welles’ 1952 “Othello,” a film shot in largely in Italy with (mostly) Italian money is of course in English—Shakespeare English, yet. Also in English, mostly, is Luca Guadagnino’s “A Bigger Splash,” a competition entry that premiered here yesterday.

Guadagnino is best known in the United States for his sprawling, florid 2009 melodrama “I Am Love,” which starred the Scottish goddess Tilda Swinton, a longtime collaborator. I was impressed by the visual sweep of that film, and how its use of music so overtly pushed the movie along and aloft, but the narrative didn’t do much for me. Here Guadagnino adapts an earlier source—a 1969 French picture “La piscine” (“The Swimming Pool”) directed by Jacques Deray of “Borsalino” fame. That picture, starring Alain Delon, Romy Schneider, Maurice Ronet, and Jane Birkin, is a sex drama of the vin ordinaire variety, but its story structure provides Guadagnino a solid base from which to deploy some visual, aural, and performative fireworks.

The movie begins at a sold-out stadium show, with Swinton lurking behind the stage in glitter-rock makeup and costume before striding out before an adoring crowd. But before you can say “Rikki and the WTF,” the movie cuts to Swinton’s Marianne in normcore mufti, and then in nothing at all, lounging around with lover Paul (Matthias Shoenaerts, here a dead ringer for Franco Nero in his ‘60s beefcake prime) in secluded environs. Their peace is interrupted by a call from one Harry, a figure from both their pasts. He is arriving soon to their Italian island (Pantelleria, a locale both rugged and gorgeous) with a “surprise” in tow. Harry, a vintage rock and roll producer/entrepreneur who figured substantively in Marianne’s career, and later that of documentarian Paul, is an aging hot mess motormouth to beat the band, and then find another band to beat, and another. Stopping halfway up a hill to take a whiz on some rocks, he’s chastised by Paul: “Harry, come on, that’s a grave.” “Well, Europe’s a grave,” Harry shoots back.

His “surprise” is Penelope, the daughter he until recently never knew he had. Equal parts sullen and nubile at first, she’s beautifully played by Dakota Johnson. One can see right off the bat that these two are just what Paul and Marianne don’t need in their lives right now. Marianne’s recovering from an operation that may well leave her without her singing voice—she’s under doctor’s orders not to speak. As for Paul, a shot in which he’s rack focused with the tantalizing neck of a wine bottle clues you in to what he’s up against. Guadagnino delights in misdirection as much as anything else: he’s apt to cut from a scene before the tantalizing action it seems to promise is ever realized. It keeps the psychosexual dynamic at a slow simmer throughout; the viewer feels as if she’s tip-toeing toward whatever Bad Thing is going to happen. And of course it does. The movie teems with little moments of malevolence and peculiarity. Lighting up a cigarette, Penelope says to Paul, “You want some?” and Paul says, “I don’t smoke.” “That doesn’t mean you don’t want some,” she taunts. In another scene, a desperate-to-impress Harry does an impromptu dance to the Stones’ “Emotional Rescue” that rivals Oscar Isaac’s disco number in “Ex Machina” for eccentric choreography in an equally eccentric context. The overall effect of the film was quite satisfying for me—“A Bigger Splash” played rather like Baroque Chabrol, which of course to some minds might equal “Hitchcock.” It’s not quite that, but there are moments. And Baroque Chabrol is good enough anyway, not only because a mere five years after his death regular Chabrol is so, so missed.

So I wasn’t prepared, at my press screening, for the credits to come up and the film be greeted by a very hearty chorus of boos. Some applause, yes, but the booers were sufficiently lusty that I had the impression they’d been waiting for it, and that was odd, because even if one were not to particularly like this picture, there wasn’t anything overtly boo-able about it. Then it hit me: this is an Italian festival, full of Italian press, and this must be…an Italian director the Italian press can’t stand, for whatever reason. I consulted with a couple of British journalists outside the screening and they confirmed that, yes, the hometown dislike of Guadagnino was “historical.” I wasn’t able to get much more insight initially, but I remained fascinated. And this proved one of those instances when social media, often disdained as the Scourge Of Everything Good, intelligent discourse in particular, proved genuinely useful. I was having a Twitter conversation about the booing with The Wrap’s Alonso Duralde, and the film critic Tommaso Tocci, who tweets as @Cinelais , offered some illumination. As far as Guadagnino goes, yes, he says, “there is some disdain, which I find sad.” But there was a larger issue for Italian critics and viewers with the film, what Tommaso aptly calls “one of those little pockets of meaning that get lost in translation.” In this case, it was the casting of the well-known—in Italy—comedian and satirist Corrado Guzzanti in a small but key role, one that takes a very particular turn at the film’s ending. I did not see what the Italian audience saw…but I did see a point at which the film might have ended perfectly, and instead there were a few minutes spent with Guzzanti in a scene that struck me as awkward to say the least. But what was a troubling but perhaps minor flaw for me was, in Tommaso’s estimation, a deal-breaker for the native audience, a bit of pomo tomfoolery too far. “Jarring, too distracting,” he wrote. “With the extra-filmic stuff on top, it means the Italian press lost it completely.” And it’s something that will barely register, if at all, with non-Italian audiences. 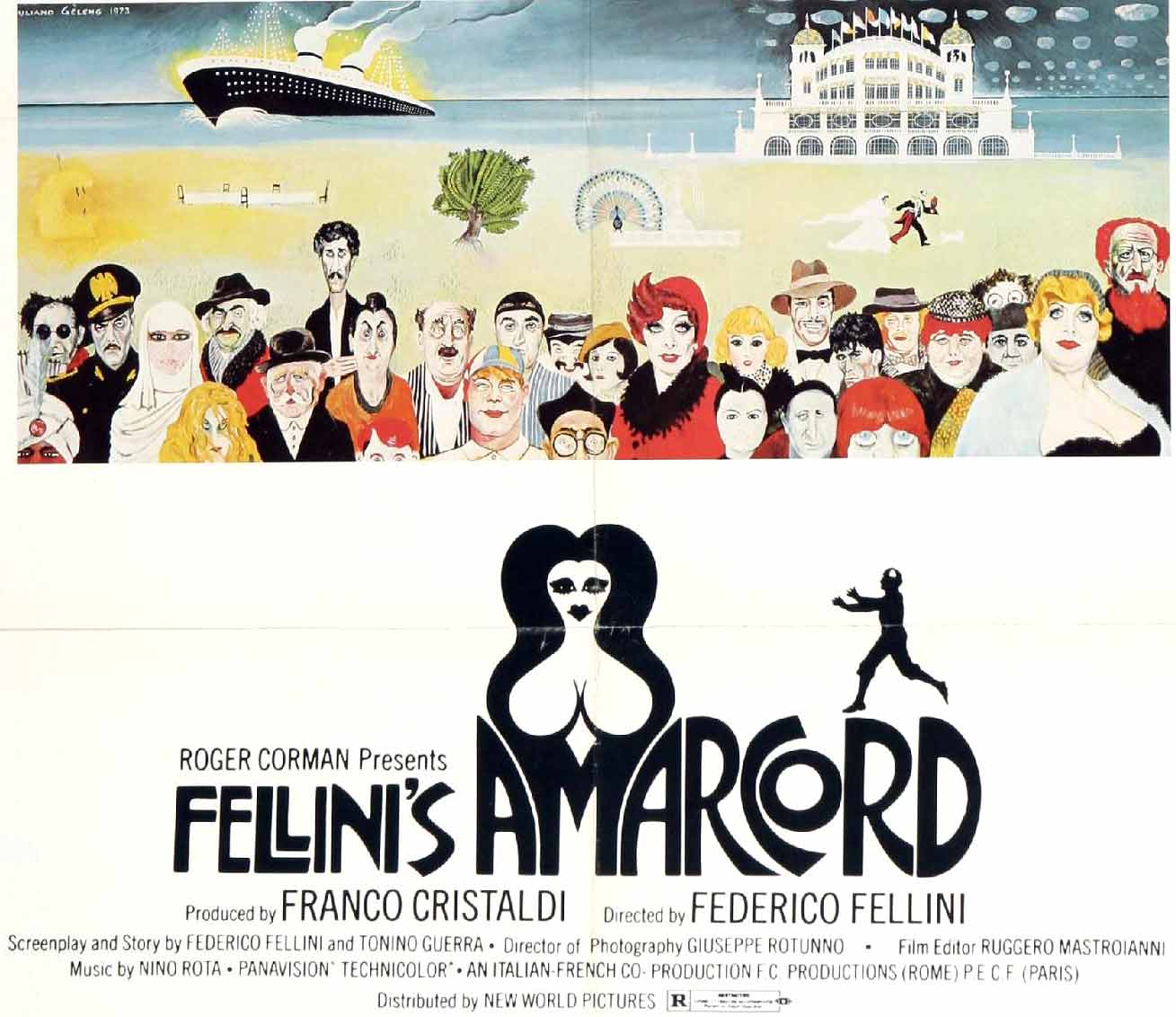 More warmly received on Sunday evening was a restoration of a work by one of the most world famous of Italian masters. Federico Fellini’s 1973 “Amacord,” a colorful memory play that was part of what that guy in “Annie Hall” would call Fellini’s “indulgent” phase, is a film that seems wiser, funnier, more raucous and improper year after year. The restoration by the Cineteca di Bologna looked gorgeous on a properly huge screen in the Festival’s most capacious theater, the 1,400-seat Sala Darsena. Yes, the house was only one-third full, but it was a 10 p.m. screening. I felt blessed to be there.