The tortured genius has always been a mainstay of cinema, and that archetype is fully represented at this year’s TIFF, ranging from Miles Teller’s drumming prodigy in "Whiplash" to Timothy Spall’s portrait of Britain’s master of landscape painting in "Turner."

A pair of films that screened in the past two days caused my mind to drift to a topic that has popped up in headlines recently following the death of Robin Williams: Does superior talent and artistic greatness go hand in hand with personal trauma and psychological problems?

"The Humbling," based on one of Philip Roth’s less-admired novels, opens with Al Pacino as a once-mighty actor obsessively reciting the “All the world’s a stage” soliloquy from "As You Like It" to his dressing-room mirror. With smeared greasepaint and a haystack of hair that recalls Boy Dylan circa The Rolling Thunder Revue, it becomes apparent that his Simon Axler has lost the ability to remember his lines and, possibly, his hold on reality.

After taking a swan dive into the orchestra pit during a performance–a tumble that earns him the headline-blaring nickname of “Shakespeare’s Spider-man”–he spends time in a mental health facility before retreating to his rambling, sparsely furnished Connecticut home. There, he stumbles about in a zombie-like fog until an unusual guardian angel in the form of the supposedly lesbian daughter of old friends (Greta Gerwig, who somehow survives in an often unbelievable role) decides to act upon her girlhood crush on Simon and seduce him.

Pacino’s reunion with director Barry Levinson (HBO’s "You Don’t Know Jack") manages to improve upon its source material while reflecting upon its 74-year-old star’s own lackluster career of late. And the actor does a fine job of depicting a man in suspended animation as he stumbles through the motions of living, as the lines between reality and fantasy blur. It helps that a mordant humor courses throughout, none more so than when he bungles his attempt to shoot himself with a shotgun: “Hemingway must have had longer arms,” he forlornly surmises.

"The Humbling" tends to stumble whenever it veers away from its central character. But much is forgiven, as Pacino admirably rushes headlong into his role’s physical humor, sometimes to the point that it is as if we are watching his character crumble before our eyes, and the very act of acting is causing his body and mind to decay. That the final act of his career boils down to a choice of doing a hair-loss commercial or one last go-round with King Lear is the very definition of comedy and tragedy. 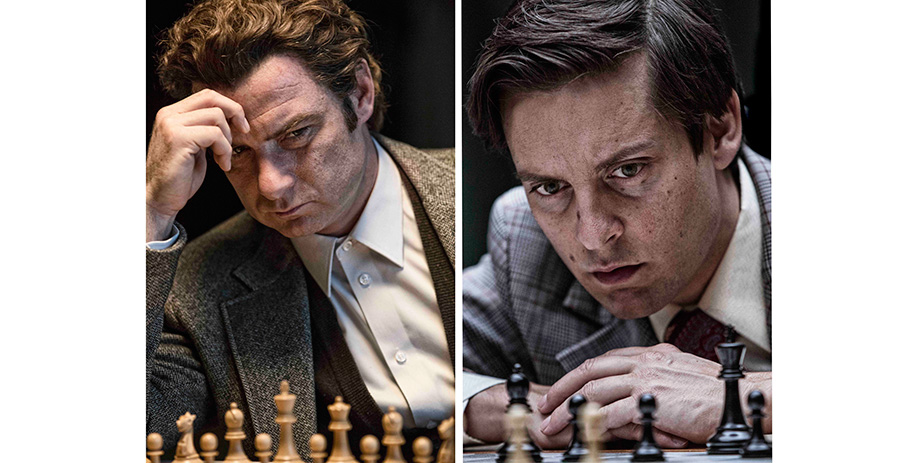 Does Tobey Maguire ever age? Apparently, Hollywood doesn’t think so. In "Pawn Sacrifice," the onetime child star–now 39–portrays tormented chess champion Bobby Fischer from his late teens to the cusp of 30, when he scored his 1972 triumph against Russia’s Boris Spassky in what was the cold-war equivalent of the Super Bowl.

But the casting actually somewhat works to the film’s advantage, since Fischer never truly had a childhood what with his single-minded obsession with chess and a self-centered mother who neglected her son while hobnobbing with fellow pro-communist sympathizers. He did manage to inherit a lifelong sense of paranoia since the FBI kept a file on her in the ‘50s, one that would drive him to the edge of madness.

The movie begins in earnest when Maguire takes over the role from the younger actors playing Fischer as the march begins to what would become his most memorable achievement. For a while, director Ed Zwick (redeeming himself somewhat from his 2010 misfire "Love & Other Drugs") attempts to turn "Pawn Sacrifice" into a semi-successful ‘60s time capsule. When the sheltered Fischer heads to a tournament in Los Angeles, the era is summoned by bikini babes, surf music (exemplified predictably by "Walk Don’t Run" by the Ventures) and free-flowing love.

But "Pawn Sacrifice" truly comes to life when Liev Schreiber swaggers onto the screen as Spassky, the then-reigning top player in the world. He is the rock star to Fischer’s nerdy upstart and, with minimal dialogue and most of it in Russian, the actor makes you believe that, for one brief moment in time, the whole world was caught up in chess fever.

Zwick manages to make scenes of two men watching the clock as they plot their moves into a riveting sport. But what is more fascinating is the downward spiral that Fischer suffered mentally during this period. Going into isolation and constantly checking his phones and hotel rooms for wiretaps, throwing tantrums over the slightest noise during matches, brutalizing his chess-champ priest who stood by his side (Peter Sarsgaard) and the manager who led him to fame and fortune (Michael Stuhlbarg).

Ultimately, Fischer paid a heavy price for his genius. It is up to the audience to decide whether sacrificing all to achieve the ultimate is ever really worth it.