Again, we’re back with a dispatch of films that have almost nothing in common other than the fact that they played at the Toronto International Film Festival, celebrating its 40th anniversary this year. Much has been made, appropriately so, of how inclusive and diverse this fest can be. And it’s not just lip service or tokenism; it has always been a festival that felt like it has opened its arms to films and filmmakers from around the world. And so while these three have literally nothing in common thematically or tonally, that’s why one of the reasons I enjoy lumping them together. They embody the scope of one of the most diverse fests in the world.

As he so often has, the great Thai filmmaker Apichatpong Weerasethakul (“Uncle Boonmee Who Can Recall His Past Lives”), who is included in the Masters program here at TIFF, finds ways to craft mesmerizing filmmaking without being precious or overly calculated in the way he does so. His best work often feels like a dream captured on film. And his best work often captures a worldview in which this plane of existence and another one don’t just exists side by side, but are constantly sharing the same space. Such is true of “Cemetery of Splendour,” a film that I think is minor when compared to some of its creator’s best works, but resonates deeply as a movie made by someone with total command of his form.

“Cemetery” takes place in the northeast region of Isan, at a hospital for wounded soldiers who do little more than sleep. They sometimes wake up for brief periods of time, but crash back to the land of dreams. A local woman named Jen (Jenjire Pongpas Widner) spends her days with these men, talking to them, cleaning them and trying to figure out what’s wrong. She becomes attached to one of them, a kind man named Itt (Banlop Lomnoi), who occasionally awakens and has conversations with Jen. She also meets a woman named Keng (Jarinpattra Rueangram), who claims to be a medium who can see the visions of the men while they lie comatose. Keng, Itt and Jen form a unique trio—all operating on some level between the past and present. “Cemetery” sometimes feels less purposeful than his other work, but there’s a sequence in the final act in which Jen and Keng walk through a woods in which the medium can still see the palace that stood there centuries ago that makes the whole venture worthwhile. There were times when “Cemetery” lost me, but it definitely got me back by the end. 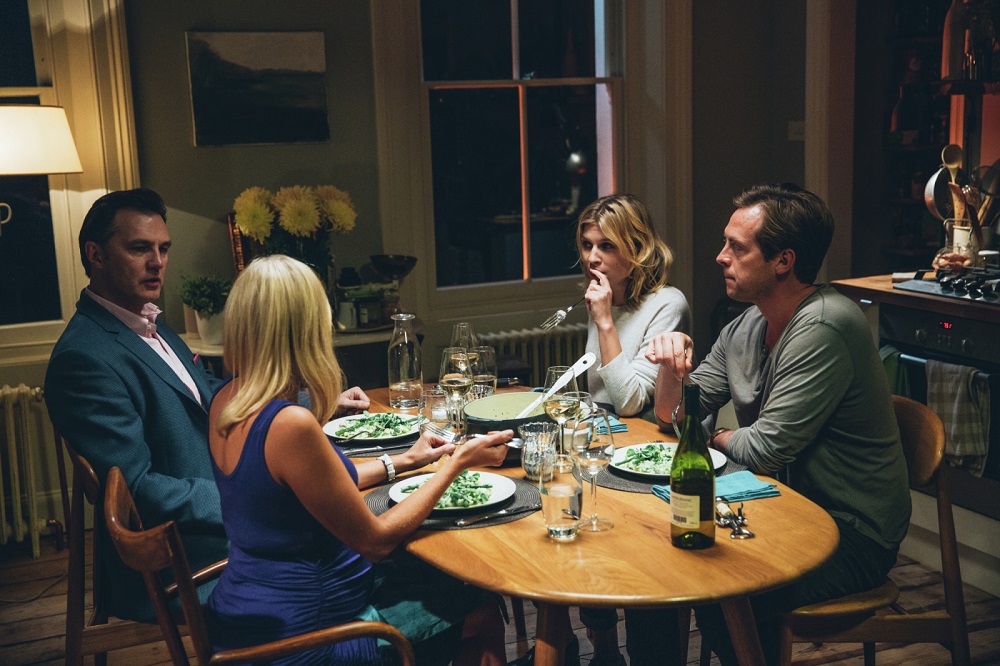 “The Ones Below” never had me other than to make me angry at another thriller that uses motherhood and pregnancy as tools in a cheap thriller. David Farr’s film in the City to City London program is one of those movies that strives for Polanski in its detailing of a suburban nightmare, but is ultimately hollow. This British playwright turned filmmaker doesn’t care about these characters or their plight. They are merely tools for a movie built on vile twists and unbelievable behavior. Polanski worked from deep human emotion and relatable paranoia. For some reason, when filmmakers try to re-create that but mistake the style of the auteur without finding any of the substance, I respond with extreme dislike. This movie just doesn’t work.

Kate (Clemence Poesy) and Justin (Stephen Campbell Moore) are living in a gorgeous London suburb in a duplex with an apartment below theirs. Jon (David Morrissey) and Teresa (Laura Birn) are the new neighbors who act a little unpredictably. After a few bizarre encounters, things seem to settle in with the two couples. It helps that Teresa and Kate are both pregnant. The upstairs couple hosts a dinner for the ones below, and tragedy strikes. Of course, there’s no movie otherwise. “The Ones Below” is a film in which longing to be a mother, or nerves about whether or not one wants to have a child, aren’t thematically examined as much as employed as plot devices. You know, mothers be crazy. 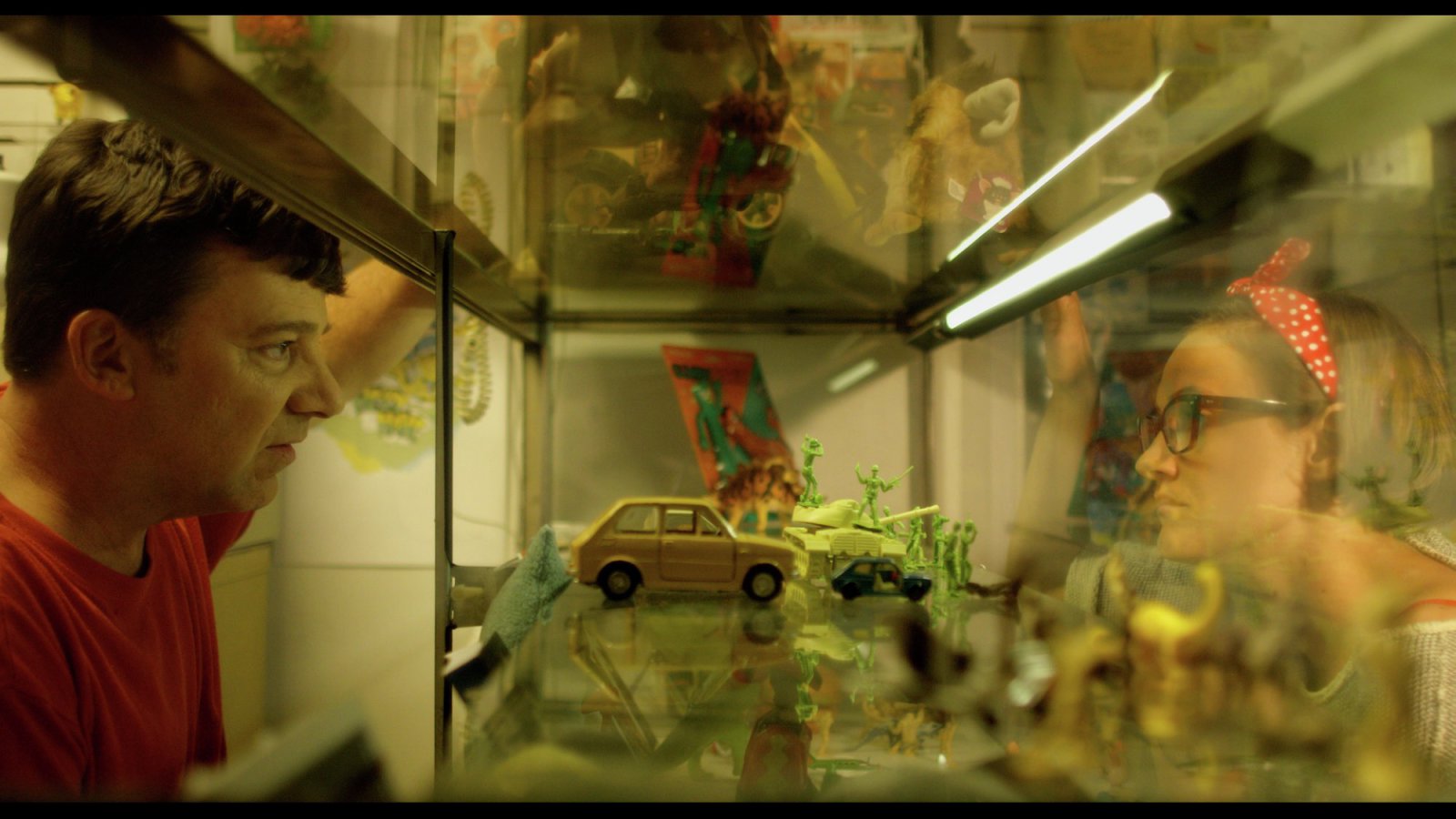 Much more intriguing, although still somewhat forgettable, is A.D. Calvo’s “The Missing Girl,” playing in the Vanguard program at this year’s TIFF. Anchored by strong performances by Robert Longstreet and Alexia Rasmussen (so great in “Proxy,” which also played in Vanguard), “The Missing Girl” echoes “Ghost World” in the way it feels like a solid, character-driven graphic novel on film. It’s awkwardly stylized (sometimes too much), but the leads are always engaging, and the plot is unique and entertaining. What starts as a story about an average dude being reminded of his past verges into mystery without losing its sense of character. And it becomes thematically dense in that Calvo’s film is about men and their possessions—whether they be comic books, cars, or women.

Mort is a decent guy. He owns a comic book store that’s named after him, and doesn’t seem to have many customers. He hires a new girl, and the two spend time conversing. Mort goes home to a recording of his own voice giving him support every night: “You are a worthy guy. Do things that make you happy. Don’t hurt others. Help them if you can. But take care of yourself first. And call mom every now and then.”

Mort notices that his new employee Ellen looks strikingly like a girl he knew in high school who went missing. And then Ellen disappears herself. Is it Mort’s old high school acquaintance responsible for both disappearances? Mort dives deep into the investigation, but realizes that people aren’t as predictable as we think they are. And neither is this movie. Don’t judge a comic book by its cover.