TIFF 2014: Two Very Different Looks at Homelessness in “Shelter,” “Time Out of Mind”

The increasingly debilitating economic disparity in this country has clearly drawn the attention of our filmmakers. Ramin Bahrani’s “99 Homes” premiered on Monday night to praise for the way it uses the housing crisis to dramatic effect. Two films about homelessness—Oren Moverman’s “Time Out of Mind” and “Shelter,” the directorial debut of Paul Bettany—not only seek to capture the people at the bottom of the societal ladder but offer a great contrast in storytelling. Moverman’s film is completely free of melodrama, trying to convey a character study about a man who society has deemed doesn’t even exist anymore. It is stylistically daring, but relatively free of traditional plot or melodrama. Bettany’s film is the opposite—heavy with back story and manipulative storytelling devices. It’s fascinating to see them both in back-to-back days, and realize neither approach completely works, as both films fall victim to the delicate balance of drama required to engage an audience or push them away.

In the superior film of the two, Richard Gere continues to take interesting work in director-driven projects after the acclaim he received for “Arbitrage,” by following up that story of a rich man with one of a very poor one, playing George in Oren Moverman’s “Time Out of Mind.” George has fallen so far out of structured society that he barely registers. He is first spotted squatting in an apartment (from which he is kicked out via cameo by Steve Buscemi), and he bears the physical signs of a man who has led a tough life: scars, ragged clothes, slumped posture, narrowed eyes, unconfident gait. George moves from shelter to shelter, trying to secure a bed while being forced into bureaucracy through the fact that the system he needs to help him doesn’t recognize his existence. He doesn’t have an SSN because he doesn’t have a birth certificate, and there’s no proof of address or identity to get one of those. George befriends a man named Dixon (Ben Vereen) who tries to help and lingers near his estranged daughter (Jena Malone), drowning the courage needed to speak to her in a bottle.

“Time Out of Mind” is more notably melancholic and meandering than Moverman’s “The Messenger” or “Rampart.” The writer-director purposefully avoids melodrama, attempting instead to chronicle a few days in the life of a man on the street. His most daring choice stylistically is in how often he shoots George from not just a distance but another setting altogether. For example, George will be having a conversation on the street and the camera is in an apartment a few floors above. We can even hear the dialogue of the people who live there behind the window. It’s a visual motif—through windows, doors, hallways, the other side of the street, etc. There’s also the CONSTANT noise of NYC—car engines, horns, people talking, construction equipment, etc. The thematic underplay is easy to decipher. This is the story of a man in a strata of society that we ignore. We go about our lives. George’s story could be happening on any street in NYC if you just looked out the window. The best quality of “Time Out of Mind” is in how Moverman puts the message right there in the form.

The attempt to make George’s story a common one is noble but can feel dramatically unsatisfying. “Time Out of Mind” is often as meandering as its protagonist, which, again, is an admirable undertaking for a film but also a bit distancing for a viewer. The film too often feels unengaging and directionless. Gere finds a genuinely moving beat here and there—this is one of his most subtle performances and, really, reason alone to see the film—but the obvious inclination to avoid melodrama leaves a film without anything to anchor it. Like the man who so easily drifts away from life, it disappears in front of your eyes. 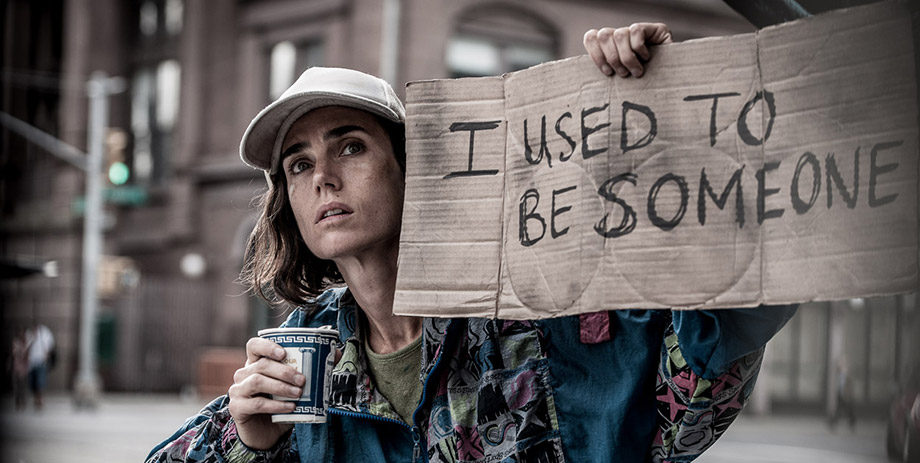 “Shelter,” starring Jennifer Connelly and Anthony Mackie, certainly never disappears. It’s too in your face to do that. Marking the directorial debut of Connelly’s partner Paul Bettany, a great actor in his own right, “Shelter” is an emotional passion project. It’s dedicated to the couple who lived outside the actor’s apartment building. While it may be emotionally resonant for some viewers, it is earnest to a fault, pinned down to the ground by too much back story and manipulative storytelling. Connelly and Mackie are good but the film needed a rewrite that started with the note—“More subtlety.”

Jennifer Connelly looks skinnier than ever as Hannah, a junkie street dweller who crosses paths with the protective Tahir (Anthony Mackie). The two form a bond, and, eventually a relationship. They take up residence in the home of a rich couple gone for the summer. They work to kick Hannah’s addiction. They have deep back stories, including a son for Hannah that she left behind and a violent past for Tahir. Like George, they are often left behind by a system that has failed our poor people. And the film gets darker in its final act as one of the pair struggles for survival and one will do anything to keep them together.

Connelly over-emotes here but Mackie is a strong center, and I could see people going in for the ultra-earnest approach to the material from Bettany. I found the film remarkably soap operatic, as false in many of its beats as “Time Out of Mind” feels genuine. Wouldn’t it be great to find a drama about our homeless population that can find the balance between the two?