TIFF 2014: Trio of Biopics Stand Out From the Crowd

A gruff aging landscape painter whose ground-breaking techniques would be a precursor to the Impressionism movement. A brilliant scientist who won’t let a debilitating disease get in the way of his destiny. A closeted genius who basically won World War II for the Allies with the greatest weapon of all: his brain.

Oscar can’t resist a biopic, and Toronto has more than its share taking a bow this year–including titles featuring a trio of British gentlemen who all bettered the world with their talents.

As “Mr. Turner” begins, director Mike Leigh doesn’t waste any niceties on trying to make the audience feel comfortable within the confines of a bright and airy early 19th-century abode, as cantankerous J.M.W. Turner returns from a painting expedition.

Burly and with a countenance of a sourpuss hedgehog, he will repeatedly go through the ritual of dropping his tools of his trade and canvases back in their places while offering grunts and growls in response to inquiries from his shuffling loyal housekeeper (a quietly marvelous Dorothy Atkinson), as the film covers the final 25 years of his life.

Leigh regular Timothy Spall, who took home Best Actor honors at Cannes and deserves many more, is in no rush to fill in all of the spaces of his portrait of an artist as an aging grump. Instead, the audience must decide for themselves what makes this contradictory man tick. First, he is indifferent to his tossed-aside mistress and their two daughters, even denying his children’s very existence. He uses poor Hannah as a convenient sexual outlet, placing his meaty paws upon her private parts whenever he feels the need for release.

Yet Turner’s obsessive devotion to his craft–he is rarely without a sketchbook handy–and refusal to rest on his laurels as he continues to redefine his technique are admirable. Joseph Mallard William is also kind to his father, William Sr. who takes great care and pleasure mixing his son’s paint. Later, Turner shows his romantic side with his jolly twice-widowed landlady who becomes his second mistress and the closest thing he has to a soul mate.

The character, however, is most in his element among his fellow painters at the Art Academy, where their pieces are all closely hung together as if part of a single work. Turner is at a stage success where he can joke, mentor and even mock the work of his greatest rival, John Constable

We don’t see Spall engaged in bringing to life many of Turner’s masterworks, although he memorably uses his own spit at one point to bring out the right consistency. But they exist onscreen in the gorgeous seaside panoramas, sailing boats and sprawling rural fields. Leigh, who probably feels more than a small affinity with his subject, has a period piece that doesn’t feel stuck in the past but alive in the here and now. 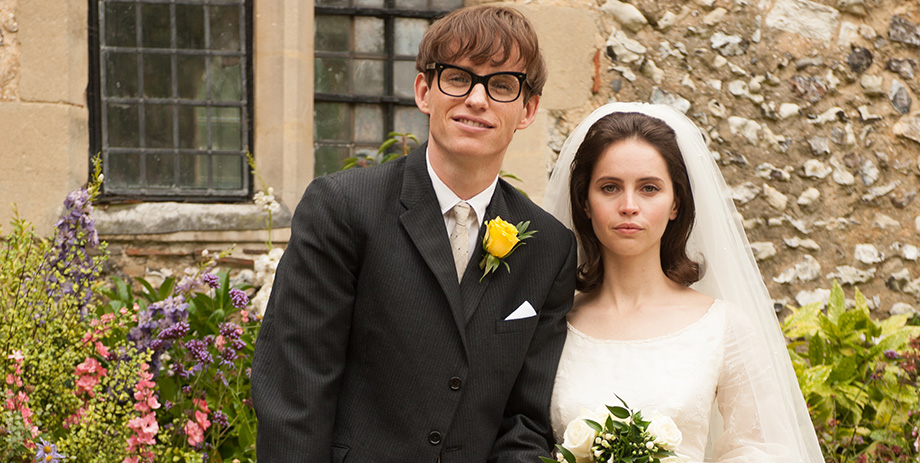 "The Theory of Everything" is an often-rapturous celebration of the joys of possibility, whether through scientific theories or defying the odds in everyday life. It also occasionally falls into the trap of being a by-the-numbers account of astrophysicist Stephen Hawking’s ongoing fight with debilitating effects of ALS-related motor neuron disease.

But director James Marsh (whose Oscar-winning doc “Man on Wire” is an equally awe-inspiring ode to tightrope walker Phillippe Petit) and cinematographer Benoit Delhomme are able to conjure eye-enticing magic with illuminated objects and soft focus nearly as well as Turner. Home interiors are accorded the same visually splendid treatment as fireworks explosions.

However, the one repeated image in “The Theory of Everything” that burns brighter than any star in the sky? The shy boyish smile that slyly spreads like warm butter across Eddie Redmayne’s face as he embodies the Cambridge prof who would forever change the way we perceive the notion of time with his theories about the universe.

There isn’t a single false moment in the remarkable performance by the actor who managed the feat of singing live while sobbing as Marius in “Les Miserables." Never did I think I wasn’t watching one of the greatest minds of this or any time rise above the limits placed upon him by a horrifying illness–including the two-year life expectancy predicted for him way back in 1963.

But, as it turns out, “The Theory of Everything” is primarily a unique love story that blossoms as a glorious fairy tale fueled by devotion that will ultimately be tested by some difficult realities. The movie is based on a memoir by Hawking’s ex-wife Jane–a Cambridge scholar with a doctorate in her own right–and it doesn’t stint on the tribulations of caring for such a high-maintenance spouse while raising three children (Stephen’s brief explanation for being able to perform sexually: “It’s automatic.”)

Pert, alert and determined as a pit bull, Felicity Jones does a fine job of rounding out her portrayal of Jane beyond that of a mere put-upon spouse. But once a handsome, well-built choirmaster at the church where she sings starts becoming involved in the family’s affairs, you don’t need a degree in physics to know a bittersweet ending awaits. 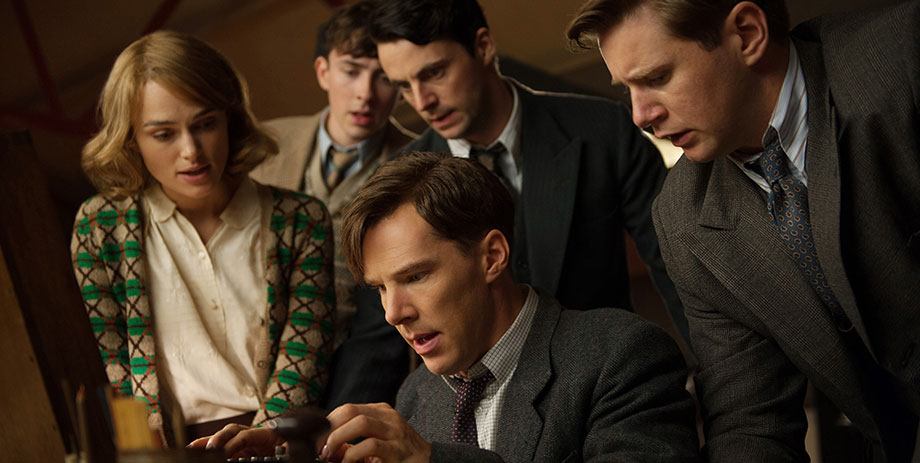 For those who are unaware of England’s code breakers of World War II and their attempts to crack the crytography of Germany’s Enigma machine–and there have been more than a few previous features as well as docs on the subject–“The Imitation Game” might prove to be an entertaining enough intro to this essential slice of history.

Benedict Cumberbatch does well by Alan Turing, the brilliant and secretly homosexual mathematician, logician and computer pioneer who leads a team of fellow Brits to bring down the Nazis by deciphering their attack plans. The social misfit who makes the actor’s contemporary version of Sherlock seem like clue-finding bon vivant is somewhat of a pathetic literalist who doesn’t even understand what a joke is yet is invaluable if you have a puzzle to solve.

But the first English-language film by Norway’s Mortem Tyldum too often settles for being John Le Carre-style spy games light. Perhaps the most potentially relevant part of this reality-based aspect involves Turing’s conviction for gross indecency in 1951 that eventually destroyed him. How utterly savage is it that his punishment was a hormonally-induced castration.

Yet that portion of the story is somehow handled as a mystery thriller, as a detective tries to get to the motive behind a burglary at Turing’s home where nothing was stolen.

Then there is a third strand that concerns a teen Turing (a youngster who would be unlikely to grow up to be Cumberbatch) developing a crush on a classmate in 1928. Yes, it affected him as an adult, but why not show an adult Turing perhaps enjoying male companionship now and then?

If you are going to make a generic war movie, why not at least make it interesting by focusing on a female barrier-breaker for once? Keira Knightley is a proper Anglicized version of spunk, as female Enigma code breaker Joan Clarke is mistaken initially for a secretarial candidate when she arrives for a job interview; she proceeds to show up all the guys trying out for a code-breaking spot by solving a puzzle in record time.

But instead of telling us more about this trailblazer in a male-dominated field–other than her parents are upset that she isn’t married at the age of 25–we must deal with her sham opposite-of-romantic engagement to Turing. There might be a powerful personal tale to be told about what Enigma meant to the war effort, but “The Imitation Game” is mostly a close imitation.