The long and winding road

The sun is finally shining, and Cannes becomes a resort town once again. Aside from the thousands of film industry visitors, this place is clogged with tourists of all nations and in all manner of beach attire, many of them senior citizens. As far as I can tell, the main thing they do is promenade.

They stroll up and down the Croisette on the waterfront side and then the window-shopping side. They walk up and down the town's main drag, the Rue d'Antibes. They eat ice cream cones; they buy red, caramelized peanuts hot from the vendors' pans, and gummi bears and licorice; they watch costumed mimes perform under the palm trees; and they walk their little ankle-biter dogs, of which there are hundreds. It's a people-watching festival in itself. 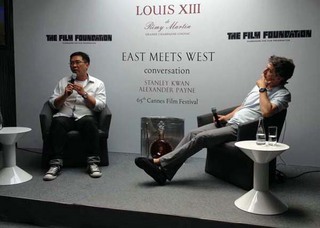 Another invitation appeared in my mailbox. This one was on heavy cream-colored paper with fancy gilt lettering. As a result, I went to "East Meets West," an afternoon conversation between Hong Kong director Stanley Kwan, best known for "Rouge" and "Center Stage," and Cannes jury member Alexander Payne, recent Oscar winner for "The Descendants." Sponsored by The Film Foundation, it took place in a pavilion at the beach of the Majestic Hotel, where the sound of waves lapping at the sand in the background was a constant reminder of the setting.

Events such as this, of which there are many at the festival, always have a stilted feeling, and this one was no different. Kwan was shy and nervous; Payne was at ease and increasingly expansive but choosing his words carefully. The topic was film preservation, and Kwan chose to discuss clips from Yasujiro Ozu's "Tokyo Story," while Payne chose Sergio Leone's "Once Upon a Time in the West," because it "speaks to the thrill of cinema." The moderator posed a tricky question, asking the two directors to name films most worthy of preservation, a question Payne neatly sidestepped with, "Even mediocre cinema is a record of who we were. Cinema puts time in a bottle."

The morning began with Brazilian director Walter Salles's effort to translate the icons of an era into legends of cinema with the premiere in competition of "On the Road," based on Jack Kerouac's iconic Beat novel of the same title. Salles has competed in Cannes twice before, first with "The Motorcycle Diaries" in 2004, which became an international hit, and again in 2008, with the co-directed "Linha de Passe. 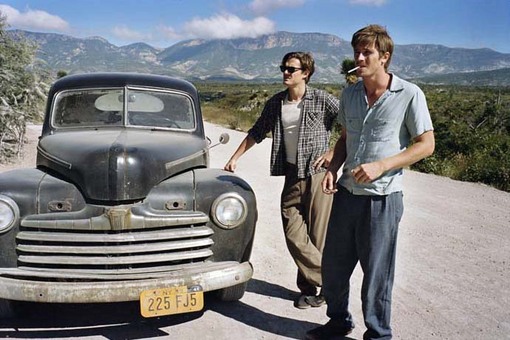 "On the Road" is a lyrical, sometimes raunchy, heavily romanticized account of four Beat writers, all close friends in their early twenties, finding themselves and their creative voices in the course of adventures that will shape their lives and futures. As he did in "The Motorcycle Diaries," Salles immerses himself in the themes of male bonding and passion for life as the twin forces that drive this road movie of a story. 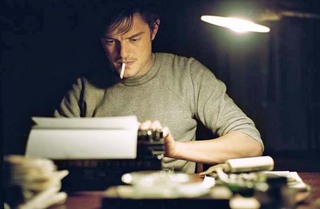 Dean Moriarty, the Neal Cassady character (Garrett Hedlund), is the charismatic lynchpin of the bohemian group that comes to include Carlo Marx, the Allen Ginsburg character (Tom Sturridge), and Ed Dunkel, the Al Hinkle character (Danny Morgan). It's all seen through the eyes of Sal Paradise, Kerouac's alter-ego (Sam Riley), their best friend and the film's narrator. The actors are cast as uniformly handsome and vital. The men they play are in love with themselves and infatuated with each other (in a platonic sense, except for Marx, just discovering his homosexuality and suffering a futile crush on Moriarty). They are thoroughly besotted by the presumed import of every thought that issues from their brains. 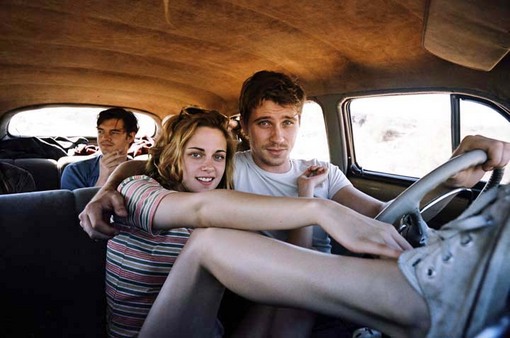 The film opens in 1947 as Sal hitchhikes back to New York for his father's funeral and meets up with the other men. Sex, drugs, jazz and more sex define their lives, with Dean's insatiable satyr-like capacity for hard partying and seduction making him the awe of his buddies. With Dean's on-and-off girlfriend Marylou (Kristen Stewart), Sal and Dean go on the road in an old Hudson, the first of the film's several cross-country trips over two years. They live by their wits, stealing food and gas and picking up hitchhikers. New York and San Francisco are the magnetic poles in their universe. 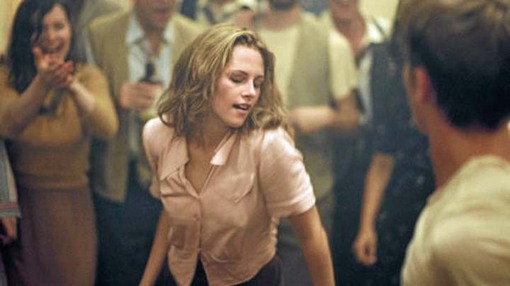 Salles has a knack for road movies, and his treatment of the period and the landscape is moodily evocative. He's faithful to the facts of the book, but I still found his starry-eyed depiction of these men cloying. True to the times, women are accessories, useful only to provide sex, babies, and housework, depicted here by Salles with accuracy, if not gusto. Women and children are the easily discarded detritus of the self-absorbed lives of the men. To me, the unrelenting romanticism of their friendships is increasingly tedious in this very long (137 min.) film.

Another new work by a major Latin American filmmaker premiered in competition in the evening--"Post Tenebras Lux" by Carlos Reygadas of Mexico. He's won prizes at Cannes for each of his previous three features, "Japon," "Battle in Heaven," and "Silent Light." His films incorporate strong spiritual and mythic elements as well as earthy and carnal aspects that can be profoundly disturbing within the context of the story. 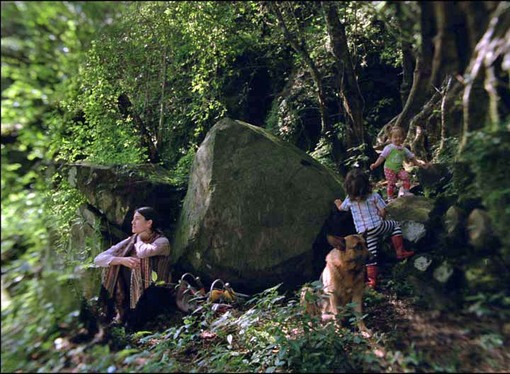 The information about the narrative of the film contained in the press kit was a remarkably brief two sentences: "Juan and his urban family live in the Mexican countryside, where they enjoy and suffer a world apart. And nobody knows if these two worlds are complementary or if they strive to eliminate one another." 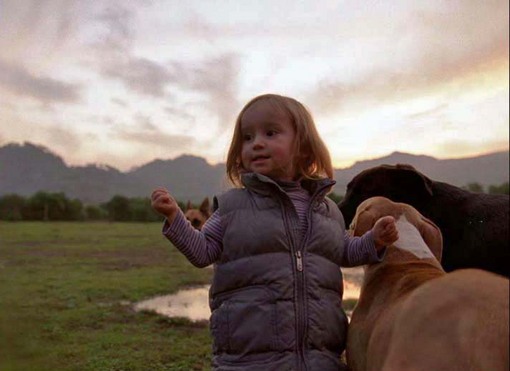 The film opens with a small girl, one of Juan's two small children, tramping through puddles in a muddy meadow as horses and cows and the family dogs wheel around in excited circles. It's a benign enough image until the sky grows dark, a thunder storm crashes to life and the sound of crickets becomes deafening. The child is still alone and untended, at the mercy of nature.

This is followed by the film's most astonishing sequence. The door to a darkened concrete-block cottage opens and a tall, lean neon-orange devil skulks in (in a special effect). He has the head of an emaciated bull with long, curving horns, genitals that hang almost to his knees, and an evil swinging tail. The devil carries a toolbox, looks in on the bedroom of two children where a little boy looks back at him, then enters another bedroom and closes the door. 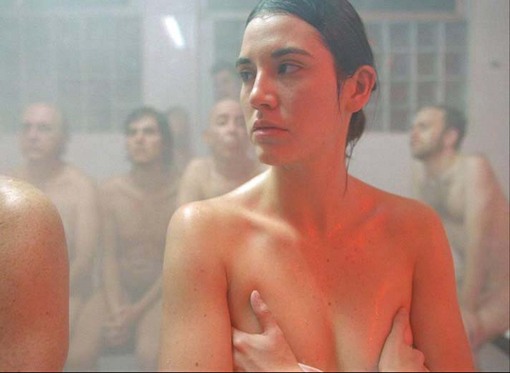 The threat has been established but Reygadas takes his time in creating a story. In fact, "Post Tenebras Lux" never does develop anything close to what you would call a straightforward narrative. Rather, it's a string of incidents and clues, make of them what you will. We see Juan's life with his family, observe his attentiveness as a father, but also become aware of his propensity to abuse dogs and bully his wife. We see the couple visiting a swingers club in a very explicit sexual sequence. 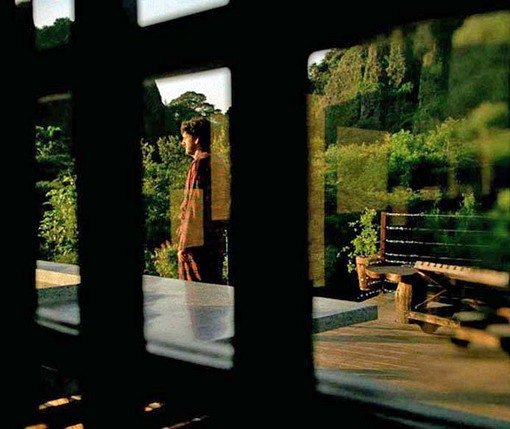 Reygadas shot "Post Tenebras Lux" in the 1:37 aspect ratio, which yields an almost square image. It's an anachronism these days when nearly all new films are widescreen. He also makes frequent use of a distorting lens that blurs images around the edges and causes a double image, creating the unsettling impression that his actors have ghostly Dopplegangers hovering just beyond the edges of their bodies. There are times when the low, intimate angles of the distorted camera seem to represent the gaze of a wary malevolent force. 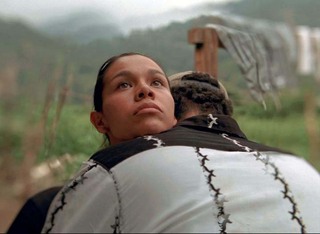 Juan almost loses his life near the end of the film, but in the course of his recovery can no longer recall his assailant. Reygadas brings mythic signs and one singularly dark event into play. To a greater extent than in either "Battle in Heaven" or "Silent Light," interpretation is a risky business. I was reminded of "Hors Satan" by Bruno Dumont, a similarly cryptic film with supernatural intimations that premiered at Cannes last year. In "Post Tenebras Lux," I suspect that Reygadas is suggesting that evil stalks the world in ways we don't understand, and that its opposite is just as arbitrary and beyond our control. 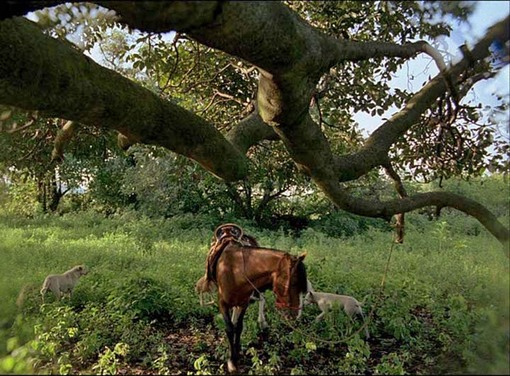