At Telluride, a film can become an event at any location that can be turned into a theater. Like with Sundance, the town spruces up its regular establishments to become screening venues of various sizes, but all with the promise of excellent picture quality and sound. There’s the Werner Herzog Theater, which functions as a hockey rink during the non-festival season. The Galaxy Theater, one of the largest places to see a movie at at the fest, is located inside an elementary school. If line-waiters are so inclined, they have easy access to a swing set.

Aside from these venues, I was able to watch scheduled films in two of the festival’s particularly unique settings, both of which are centralized to the busy Colorado avenue, providing opportunities for people to squeeze into space, and in one way or another, be able to face the screens.

I saw the Guatemalan film “Ixcanul” at the Sheridan Opera House—well, not all of it, exactly. Along with its historic seating on the first level, this venue offers its balcony to view the massive screen, but it only works for those who see the film straight ahead. Seating is available on the sides of two-leveled balconies as well, causing viewers to look diagonally and over each other’s shoulder’s, or through the scrunched legs of the first balcony part below. I can imagine the venue works better for stage performances, or any type of entertainment that involves movement. For "Ixcanul," which comes with subtitles and expansive wide shots, I was able to view half the screen.

Nonetheless, I was able to get a pretty decent glimpse of the film from writer/director Jayro Bustamante. It is about a culture clash in Guatemala, taking place within a strictly-Mayan family who live near a volcano. The three-person unit keep to their traditions when it comes to medicine, marriage and work ethic, relying on folklore to explain certain things they do not understand. They are removed from any type of city life, and don’t speak Spanish. The family’s distance from modern society is challenged when daughter Maria (Maria Mercedes Coroy) unexpectedly becomes pregnant. When she is bit by a snake with a baby on the way, the family has to take her into the city, where they face complete culture shock.

A bit slow but narratively sound, "Ixcanul" is defined by its dazzling cinematography, especially its expansive canvas shots of the Guatemalan forests. We get a great sense of this family's minuscule presence in comparison to their historical environment. Bustamante's subjects can be uneven in their raw contribution to his big picture. Coroy's face is a frustratingly vacant whiling facing the expectations of age and marriage, despite the screen time given to her. But her on-screen mother, played by María Telon, has a very emotional turn, completing the sense of tragedy with this story. As the culture clash becomes most harmful to the family, she only wants to understand, and to be understood. "Ixcanul" is set to be distributed by Kino Lorber, so keep an eye out at your local art house. Preferably ones that don't settle for impaired views. 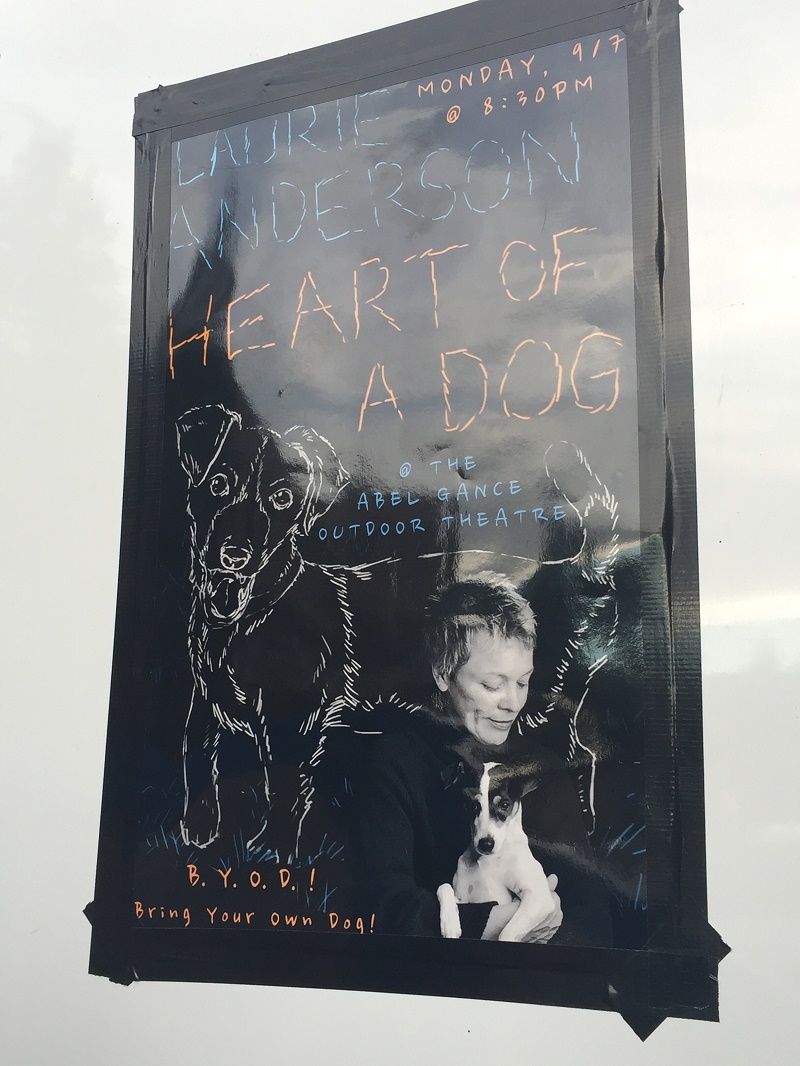 The last official screening of the Telluride Film Festival was on Monday night, after the town’s famous sunset finished painting the landscape with its orange creamsicle color. The event was “BYOD,” as Bring Your Own Dog, to celebrate writer/director Laurie Anderson’s soul-soothing film “Heart of a Dog,” as inspired by her own pooch.

Anderson’s film was projected outside at the Abel Gance Open Air Cinema, a patch of grass and a little hill off the busy Colorado Avenue, legitimized for the long weekend with a giant film screen and a fantastic sound system. It was this theater that welcomed me to Telluride last Thursday, where the festival hosted a pre-“Steve Jobs” presentation of “The Social Network.”

As the mountains provided a backdrop to the screen, this showing of “Heart of a Dog” was a definitive piece of the Telluride juju. Lots of dogs to be seen, and even better behaved filmgoers, treating this free screening at an open space with a cinema’s behavior code; hardly a tiny bright screen from the massive one illuminating us, nor were there any obstructive viewers.

Anderson wasn’t in Telluride to present the film (she was flying to Venice, where it is in competition), but her personality shown through completely in this very personal experimental documentary. It’s a magical rumination on many things, from pets to post-9/11 surveillance, to the endless question marks about life and death. Anderson’s art, music, and co-cinematography tell the viewer exactly where this project comes from (her own heart), and her voice has an incredible tranquility to it. If only our inner thoughts had the dexterity and peacefulness in how she speaks.

Venturing in many directions at an easy pace, at the center of “Heart of a Dog” is Anderson’s relationship with her rat terrier Lolabelle. Anderson’s various comments about trying to understand the world come from her interactions with her dog, and bloom to sweet poignancy. She uses an array of thought to complete her own ideas, or to understand her own memories, with references that range from Ludwig Wittgenstein to David Foster Wallace to the Tibetan Book of the Dead. Throughout, Anderson remains down to earth, especially with her recurring adoration for the dog that so thoroughly inspires her.

Triumphing with zero pretension for an experimental film, "Heart of a Dog" offers plenty of room for the viewer to do what they will with her prose. It's as if she's made a playlist for us, of different quotes that she has heavily considered throughout her life. But the execution is colored with too many artistic flourishes to simply be a visual essay. "Heart of a Dog" is more a documentary about formative thoughts and experiences, presented experimentally with a kitchen sink mentality that is 100% Anderson.