Though some may consider Sundance the place to spot the latest American indies, world cinema is an equal part of the programming. Case in point: the Lebanese romance/sex dramedy "Halal Love (and Sex)," or the Argentinian thriller "My Friend from the Park," which just won the festival's World Cinema Dramatic Special Jury Award for Screenwriting. Both are foreign-language films that nonetheless challenge conventions, each with their own way to success. Also keeping to the Sundance experience, both are exciting discoveries, too.

“Halal Love (and Sex)” tells of three different couples in Beirut, trying to find joy in their love lives without breaking the rules of their Muslim faith. In one scenario, the middle-aged Awatef (Mirna Moukarzel) decides she wants to get her husband Salim (Ali Sammoury) a second wife, to help her with the housework and the love-making, despite his insistent disinterest in a second bride. Down the stairs from Awatef’s apartment are newlyweds Mokhtar (Hussein Mokaddem) and Batoul (Zeinab Hind Khadra), who have divorced so many times, for such petty reasons, that he needs to find her another man to briefly be her latest ex-husband so that he can then re-marry her. And down the street, a freshly divorced Loubna (Darine Hamze) is finally able to marry her true love Abu Ahmad (Rodrigue Sleiman), despite it being a short-term contract, since he has a family.

The stories start off as quite cute, with a sense of humor to their absurdity. It all has a nice Hollywood warmth to it, including bright lights on beautiful faces, a vibrant color palette and a mischievous score. But writer/director Assad Fouladkar makes “Halal Love (and Sex)” last during its runtime by exploring the serious stresses of these scenarios, particularly focusing on how it makes the women feel. Suddenly, the newlywed bickering loses its dysfunctional charm, and a relationship with a married man becomes less dreamy. The tone is able to shift entirely, without losing grasp of its heart. Even when certain scenes don’t work, or the project kind of thins out as it goes along, its bid for something special with its subject matter remains firm. Plus, it is always welcome to see people talk so lovingly about sex—whether passionate or the regulatory kind—as characters distinctly do in this film that charmingly plays within the rules.

Fouladkar knows the flat roads to happy endings in so many other films, and applies that poignancy in ways not expected. As for its unique perspective, “Halal Love (and Sex)” proclaims its own pride in huge ways, which is an exciting thing to witness itself. 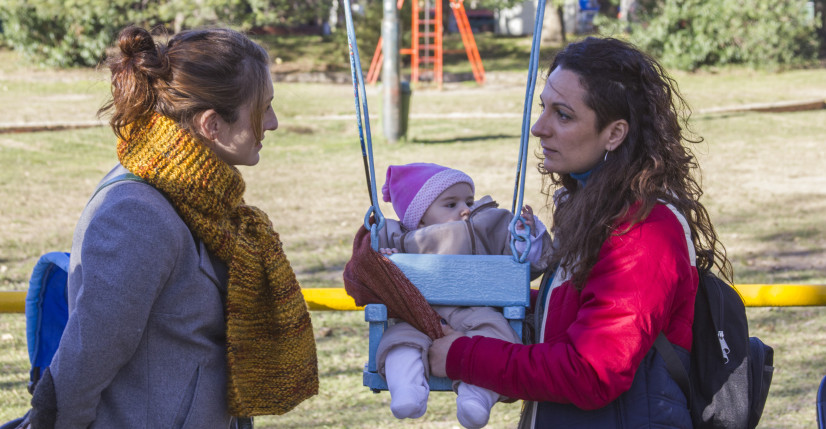 Co-writer/director Ana Katz has fashioned a very effective paranoia thriller from only raw slices of life with the Argentinian film “My Friend from the Park.” A mystery box movie set among new mothers’ friendships, it’s built from the uncertainty of having faith in other people, the balance of life directions and the new responsibilities of parenthood. It has a disturbing quality beyond any visuals, whether our fears of strangers are unfounded or not.
Advertisement

In the film, Julieta Zylberberg ("Wild Tales") plays Liz, a new mother who just moved to the area, and is overly concerned about bonding with her newborn Nicanor. She makes a new friend in a fellow mother named Rosa (Katz), who has her own baby named Clarisa. Perhaps out of necessity, or strategy, Rosa and Liz begin to bond. Their friendship complements each other, or so it seems, as Rosa is the instinctual one to Liz's conservative type—she gets Liz to give her money for a cafe tab, and then she proposes they run out on the bill. After all, who would expect two women with strollers to do such a thing?

Soon, Rosa gets stranger. She has little personal space when it comes to Liz, and has no problem asking for favors. Then, Rosa’s sister Renata (Maricel Álvarez) gets involved. Renata wants Liz’s help in getting a car, so she can drive out of the city to see an online boyfriend. It’s a pretty strange favor to ask, but for someone who may be making a new friend, it could be an opportunity to help. “My Friend from the Park” wavers with that uncertainty. And when a group of other people in the park speak lowly of the sisters, should Liz run away? Or are the sisters just misunderstood?

“My Friend from the Park” handles psychosis deftly, especially in its main two performances. Zylberberg is magnetic as someone living the questions that film viewers may have about the sisters, while showing her own tense, vulnerable emotional state. A downplayed yet completely pulsating climax provides the explosion the performance has been anticipating throughout, a mortified sensation we are very present in due to such a strong embodiment.

Meanwhile, Katz’s performance has a great touch to it. She is unpredictable, unassuming, but maybe just given a bad rap. Especially as she is defined by uncertain moral boundaries, it's an unsettling creation.

A series of strange people and stranger events, “My Friend from the Park” only has its sporadic pacing gaps to challenge its extremely clever premise and unique sense of unease. Vividly touching upon our most casual of interactions, it’s a gripping film of a small yet staggering scope.