Rick Famuyiwa’s “Dope” offered a relatively laid back Sundance 2015 a jolt of cinematic energy with one of the most vibrant comedies the fest has seen in the last few years. The director of “The Wood” and “Brown Sugar” returns with a hysterical comedy and social commentary in this high-paced hybrid that’s reportedly being circled for distribution by several major companies. It’s an incredibly smart hybrid film that captures the modern life of an American teen in Inglewood, California in a way that we’ve never seen before. It is about geek culture, black culture, school culture, tech culture, white culture, drug culture, rap culture and your culture. It is a bracingly smart piece of work that’s also wildly entertaining and insightful.

Malcolm (Shameik Moore) is a self-proclaimed geek, a kid who doesn’t fit in with any of the social groups in his school and, with friends Jib (Tony Revolori) and Diggy (Kiersey Clemons), is obsessed with ‘90s hip-hop culture. They watch old tapes of Yo! MTV Raps, have high-top fades and extol the virtues of ‘90s music over today. They’re abrasively, unapologetically smart, and they play a fascinating hybrid of hip-hop and punk in their own band. They spend most days trying to avoid the violent subculture all around them, but Malcolm can’t help notice a gorgeous neighbor named Nakia (Zoe Kravitz), who happens to be the girlfriend of a local dealer named Dom (A$ap Rocky). Nakia takes to Malcolm, and suddenly the kid who has tried to stay on the fringe is thrust into a life-shaping adventure. 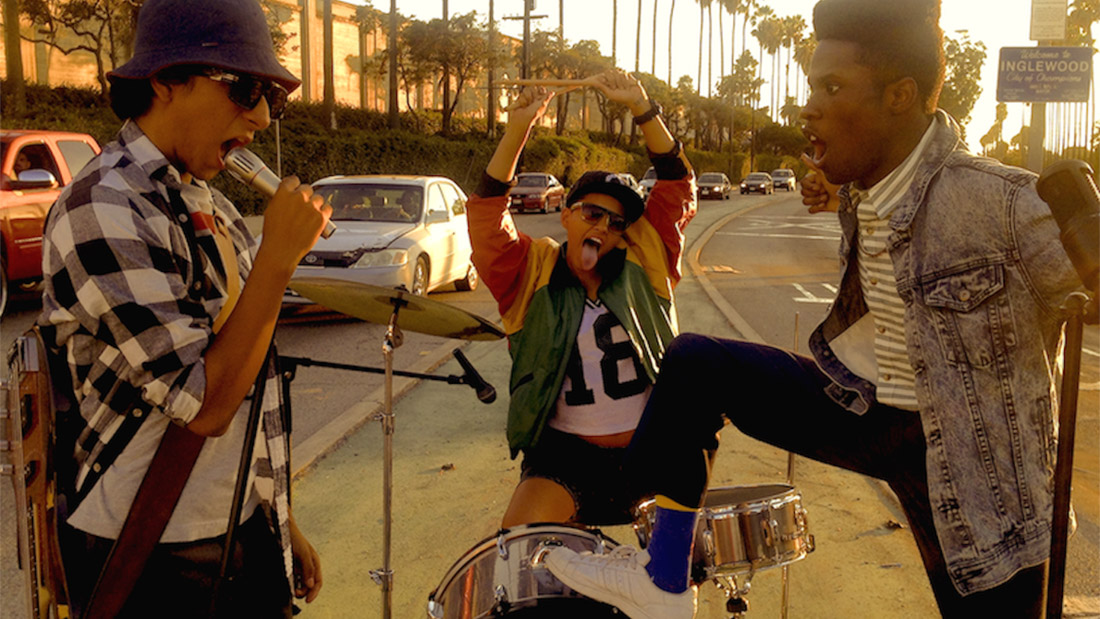 “Dope” moves like a runaway train from character to character and set piece to set piece, recalling the energy of “Go” or even “Pulp Fiction” in its structure. Famuyiwa writes smart, likable characters, especially Malcolm, a kid with urges and needs like any teenager but who sees everything from a slightly different angle. Malcolm is a kid who wants to write a college essay on “A Research Thesis to Discover Ice Cube’s Good Day,” an idea that’s both ridiculous but also really uniquely clever at the same time. “Dope” is a movie that pulls from a wide enough array of culture that it can reference Jay-Z and Neil Degrasse Tyson within a few scenes and the melting pot of decades of pop culture doesn't feel forced. It's a film about a generation that doesn't just observe their entertainment or the devices on which it's delivered but reshapes it into something new. And it’s a film that brilliantly utilizes modern technology to comedic effect, such as when a drug dealer tracks his stolen goods through Find My iPhone.

Like its protagonist, “Dope” doesn’t feel like it needs to or even wants to just fit in. It’s a movie pumping with great ‘90s hits like “The World is Yours” or "Humpty Dance" while it’s making modern references to Coachella and Molly. Famuyiwa draws such likable performances and characters so quickly that the stakes feel real and the comedy resonates more personally. Most surprisingly of all, the film sneaks up on you with a bracing social message about expectations and prejudice that totally connects in the final act. With characters like Malcolm in the world, how can you judge based solely on appearance? Unlike SO many Sundance films this year that exist more as plot descriptions than works of art, "Dope" is a surprisingly hard one to define or capture in a review. It doesn’t feel like anything else. It isn’t quite like anything else. And we need more films that, like Malcolm, aren't so easy to put in a predictable box.