The following article begins our two-part coverage of this year's Pens to Lens Gala in Champaign-Urbana. For the fifth year in a row, students ranging from kindergarten age to twelfth grade submitted their own scripts to the Pens to Lens Screenwriting Competition. Sixteen of the scripts were selected by directors from Champaign Movie Makers to be produced, while three student-made films were awarded special prizes. The completed slate of short films spawned from this contest, organized by the Champaign Urbana Film Society, were screened this past Saturday in a two-part program at the Virginia Theatre (click on each bolded title and you’ll be directed to the full short).

There was an amusing moment during Ebertfest 2006 where Roger Ebert singled out a movie that had recently been sent to him for consideration. It was “The University of Illinois Vs. A Mummy,” a microbudget horror comedy directed by Champaign-Urbana’s own Chris Lukeman and shot at the critic’s alma mater. “I’m sure this is going to be a very interesting film,” Ebert told the audience. Well, as someone who viewed all 89 minutes of the picture, I can report that it is not only interesting but highly entertaining, infused with the creative exuberance and ingenuity that has characterized the work of Champaign’s tight-knit filmmaking community. One of the greatest aspects about the city’s annual Pens to Lens Gala is how it demonstrates to young people that their dreams can become a tangible reality, and that their thoughts about life can prove to delight and provoke audiences of all ages. 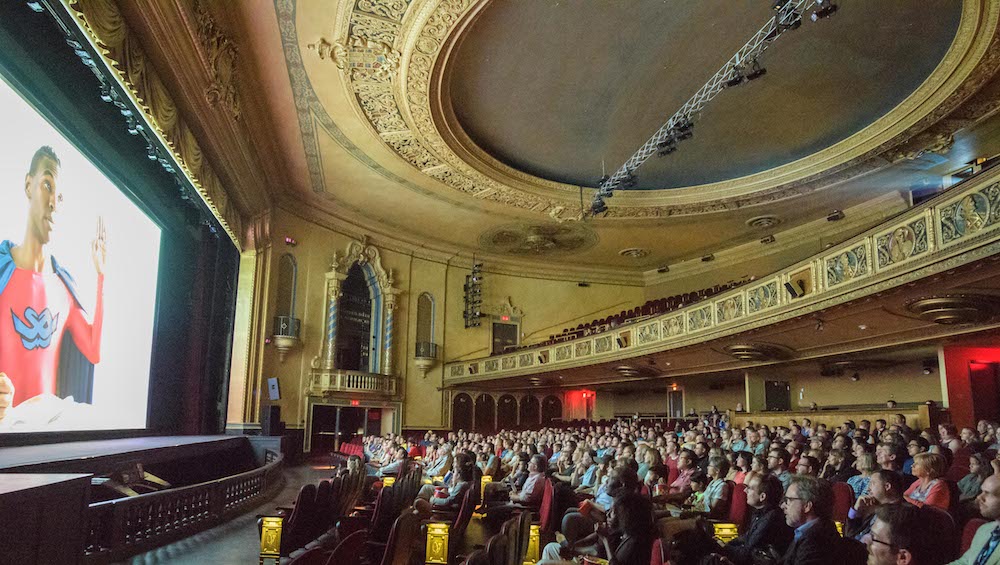 Though he was appearing later that evening in the closing night performance of Marjorie Prime at the city’s historic Station Theatre, actor Gary Ambler was in attendance to view his splendidly kooky performance in DJ Wang’s “The Double Machine,” where he portrayed a professor who accidentally clones himself. The film is bookended with musical numbers reminiscent of co-director Chris Lukeman’s memorable song performed by naively chipper freshmen in his “Mummy” feature. Gala co-host Cara Maurizi composed the music for Wang’s lyrics, and her work was praised by the young scribe, who insisted that he couldn’t get the tune out of his head. Chris and co-director Andrew Gleason noted that this was high praise, considering that Wang is a musical prodigy.

“He couldn’t make it to set because he was literally playing Carnegie Hall that week,” Chris said. “He’s in second grade.”

Anne Lukeman (Chris’ wife) directed the gala’s curtain-raiser, Ella Kirwan’s “Super Amazing Man Vs. Dr. Evil,” a superhero parody chockfull of endearingly silly gags. My favorite is one that I’ll dub a “Lukemanism,” since it reminded me of the moment in “Mummy” where the hero hollers, “Wait a minute!”, prompting the other characters to pause awkwardly for a full minute. In Anne’s film, a dotty sidekick (Lindsey Gates-Markel) pulls a ludicrous number of items from her purse while searching for keys.

“I love jokes that start out funny, become unfunny and then wrap around to being funny again,” said Anne. “That moment was on the line of being too much, but when Chris watched it, he said, ‘I will fight for that joke until my dying breath.’”

Also earning big laughs was Luca Villaseñor’s “The Luchador,” in which director Andrew Stengele constructed a remarkably convincing interrogation room out of styrofoam, and pulled off a nifty shot where the lead actor is tripled within the same frame. Yet perhaps the biggest crowd-pleaser of all was Aidan Henry’s “The 9th Annual Community Opposite Day,” an uproarious ode to the anarchy of youth. Former WCW/WWE pro-wrestler Bishop Stevens brought enormous charisma to the role of a man who relishes moving through his daily routine in reverse, from unmaking his bed to driving backwards down the street. I was surprised when Stevens turns on the TV, and Bill Kurtis appears, portraying his inimitable self.

“I had been working in Chicago with Kurtis Productions, which does a lot of documentary programs like ‘American Greed’ and ‘Cold Case Files,’” said director Charlie Kessler. “Bill was in the office a lot and I had spoken to him before. I sent his assistant an e-mail where I explained what Pens to Lens is and asked if Bill would be interested in delivering a line of dialogue in my film. She told me that he’d love to do it, and that they would shoot his scene and send it to me. He did two takes, and they were both completely different.”

With every snap zoom and quick cut, Kessler’s visual style mirrors the enthusiasm of his leading man, whose commitment to spirited slapstick rivals that of Dwayne Johnson, a fellow wrestler-turned-performer Stevens had previously trained alongside in Memphis.

“This film was the most fun thing I’ve ever done,” said Stevens. “Chaplin is regarded as one of the greatest actors because he could draw in the audience solely with his face. I had only a few lines in the script, and it was cool to prove that I could carry a whole film with my expressions.”

CHAPTER TWO: "THE STUFF OF FANTASY"

Max Libman’s adorable live-action farce, “Adventures of Filmmaking,” was one of two winners in the Student Filmmaking Competition, the other being DJ Wang’s equally funny animated fantasy, “The Power of Coffee” (Rowan Fisher’s celestial LEGO odyssey, “A Space Trip,” received an honorable mention). Demonic stuffed animals were brought to life through puppetry in Emily Ritter’s “Stuffed,” directed by Drew Brown and Wendy Ball, which included a stuffed poop emoji that thankfully received no lines of dialogue. Rosalie Anderson’s “The Perfect Friend,” directed by Emily Polk, visualized a medieval fantasy with striking compositions and narration from Polk’s husband, Thomas (sounding an awful lot like Gonzo).

As a showcase for superb acting, Katarina Blakeslee’s “Writer’s Block” is an obvious standout, with its sublime performance by Champaign theatre vet Barbara Evans (who was performing in Marjorie Prime with her husband, Gary Ambler, on Saturday). Co-directors Andrew Gleason and Thomas Nicol marveled at Evans’ portrayal of a beloved author addressing the audience at a reading of her latest, long-awaited book. She voices her belief in the importance of imagination with an urgency that is both subdued and arresting.

“I was excited at how she could command attention in the role,” said Andrew. “She really understands how to take control of a close-up through the tiny things that she does with her eyes.”

A masterstroke of the filmmakers is how they cast their extras according to the stuffed animals strewn around Evans’ bed, where we later see her chatting with her grandkids, suggesting that the book reading was all in her mind. Blakeslee deserves kudos for penning a script that rewards multiple viewings with its complexity.

Tales of alienation and adolescent embarrassment naturally make their way into Pens to Lens, and there were two animated shorts that tackled these themes with charming results. Elise Colgrove’s “Flowerboy,” directed by Dan Drake, spun a heartfelt yarn about a boy with a flower inexplicably growing where his left eye should be. Echoing Richard Dreyfuss’ dry wit in “Stand by Me,” narrator Matt Shivers notes that the flower hindered nothing but the boy’s “ability to make friends…and his depth perception.” Director Michael Bach nailed the giddy nonchalance of Henry DeVivo’s “The Werebanana,” where a kid transforms into a banana when the crescent moon rises. As a clock counts down toward self-destruction, it pauses to shrug, “Aw, what the heck?”, before eliminating several seconds just to up the tension.

Some of the shorts this year played like the enticing teaser for a feature-length narrative, such as Bridget Spillman’s “Gnarled Alliance: A Tale of Brothers,” directed Thomas Polk, which sets up an epic sibling rivalry. Director Jon Lecouris drenched Robert Mercer’s thriller, “Colibri,” in a brooding atmosphere, complete with slick camerawork and a moody “Drive”-esque score, as its story concludes on a cliffhanger. I, for one, am immensely eager to see a feature made from Madeline De Coste’s “I Know You,” a vignette about two secret wonder women who meet in an elevator, and gradually realize they are each other’s arch-nemesis. Co-directors Becky Nicol and Nadine Gleason came up with a killer comic beat where the women briefly put their argument on hiatus in order to reapply their masks.

“In all the superhero movies that are out right now, you see women kicking butt, but you rarely see what they do as everyday people,” said Nadine (wife of Andrew). “I really liked how Madeline’s script took us behind the scenes and into the lives of these strong women.” 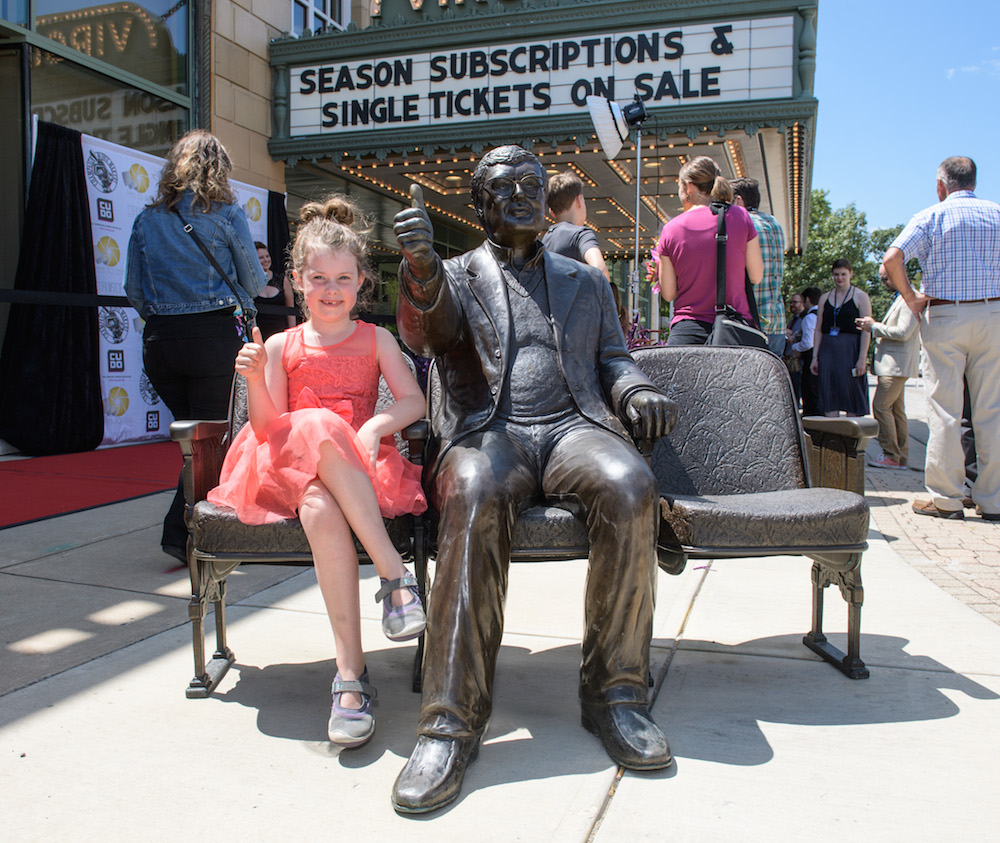 Check back tomorrow for Part II of our Pens to Lens 2017 coverage, which will feature impressive stop-motion animation, Kubrickian horror and a provocative satire about Native American mascots.

For more info on Pens to Lens, visit the gala's official site as well as its YouTube and Facebook pages.