Jennifer Lawrence versus Cellphones: ‘I would choose Peeta.’

I was surprised and annoyed that what I considered a minor incident at the Golden Globes press conference with Jennifer Lawrence should become an issue in the Twitter-verse. To most of you, I say: You had to be there. Context is everything.

To begin with, backstage is filled with journalists who have been sitting all day waiting for the award winners to come backstage. This is a group of high level of professional journalists. Many speak more than one language and are assigned here specifically because of their English abilities. When a winner is brought back, the winner is announced and walks up on a small stage to stand behind a mic and the reporters raise their hands to ask questions.

We understand that there is little time and with the bigger awards and bigger stars, more questions than there is time for. Things need to go fast, but there is an etiquette involved. There are two microphones on either side of the room. When you get one in front of you, you need to look up from your laptop or stop taking photographs. You might want to steady the microphone while you ask the question and you should look at the winner because part of communication is body language and facial expression.

I was on the other side of the room from the reporter who was chastised, but I was sitting in between two foreign correspondents, both of whom spoke Chinese, but spoke English to me. One of those reporters was able to ask a question during our time backstage.

Earlier in the evening, Lawrence had been a presenter on stage with Amy Schumer, who was also nominated for Best Performance by an Actress in a Motion Picture (Musical/Comedy). During their presentation, Lawrence and Schumer made comments about cell phones. Schumer told someone in the front row: “Please turn your phone off.”

When Jennifer Lawrence came backstage, she did not make a general statement, but was immediately asked the first question, which she replied to before the actual question was out.

The reporter began: “This is a question from the fans of the Golden Globe Facebook page…”

Lawrence quickly turned the reporter into her straight woman by responding, “I would choose Peeta.”

The reporter then continued “And the next one is what was your favorite part of filming the movie?”

Lawrence responded, “Whenever there was a scene with the whole family. Actually, there’s a scene when we all sit around the kitchen table and we all decide when we all start taking it seriously and Tony starts asking the questions and the dynamics get set. That was a really great scene to shoot.”

The next reporter asked, “On a scale of one to ten, how bad did you feel about winning?”

Lawrence, smiling, responded with, “She’s going to be fine. It wasn’t a matter of feeling bad, because she’s funny and hilarious. I really expected Amy to win. This was very truly surprising for me. I was really surprised.”

Another reporter asked about her favorite and her least favorite housewives of all cities, knowing that Lawrence is a “huge Bravo fan.” Lawrence admitted her favorite was Lisa Vanderbilt, but declined to reveal who she liked the least, saying, “I don’t want to have to say because who knows when you are going to run into these people.”

There was a follow-up question about Amy Schumer: “You guys said you were going to dress as twins this evening?”

Lawrence explained, “But then I blew it because it was going to be expected. We just wore our own thing, but I hope you were satisfied by our presentation. Seems like you weren’t. Next question.”

The next question was: “Who are you most looking forward to celebrating with tonight and what are you going to do to celebrate?”

Lawrence’s response was: “I am most looking forward to celebrating with Amy and David. David’s been my champion for years, and I have been his. Now I get all of his attention because I am the only cast member tonight. So it is my real dream come true. So I am going to celebrate with David. We are starting a gang. It is like high school, and we were all staying at the same hotel. It is like when you work with people, it is a tiny pool.”

The next question was about Jennifer and Joy. “Jennifer, in the film you play a very strong woman that fights through a lot of odds to get to the career she built. Was there a time where you got some closed doors and people shutting you down? And if so, how did you fight through and stay strong and successful?”

Lawrence replied, “Of course I got told no a million times. You weren’t going to become a successful actor and not be told many, many, many times. I really wanted it to work. I wanted to do absolutely everything that I could do before giving up. I had a five-year plan, but yeah, I definitely had to convince people to hire me.”

Then a reporter tried to be a comedian or at least give Lawrence a set-up, asking, “What was your five-year plan? If you could have an extra body part what would it be?”

Lawrence only answered the second question, “I really want to think about this one. I guess extra arms would come in handy. I am left-handed and what if I ask for an extra body part and I get a right hand? Well, that one is useless.”

This is when, the reporter in question asked his question, “How did you see yourself…”

And Lawrence responded, “You can’t live your whole life behind your phone, bro. You got to live in the now.”

The reporter then got out his full question: “How do you see yourself for the Oscar night?”

Lawrence responded, “We are at the Golden Globes. If you put your phone down, you would know that.” There was laughter from other journalists.

The same reporter laughed and then asked,  “How was working with Edgar Ramirez?”

Lawrence replied, “Working with Edgar was wonderful, so sweet, terrific actor. Doing scenes with him is phenomenal. He really helped me with Spanish. All of it is gone now, but I love working with Edgar.”

What I recall about the incident in question is that the reporter was holding his cellphone in front of his face. The reporters on either side of me, were also using their cellphones to take photos and tweet, but the person on my left did not do so when she got the mic and was asking a question of another winner.

Another reporter, Chris Trondsen tweeted that “The reporter was asking a question but either filming or taking pictures off of his phone while talking to Jennifer Lawrence.” He further states, “She did NOT bully that reporter. He was not reading questions off of his phone.” If the other professional reporters felt she was being rude they would not have laughed. Trondsen also noted this, tweeting “It was light hearted.”

What does the Emily Post Institute in its “The Etiquette Advantage in Business” have to say about this? The book has a whole chapter called “The Smartphone” and notes:

“One of the ways we demonstrate our respect for others is by giving them our full attention. Divide your attention between people and a device—even for work-related reasons—and you run the risk of those around you perceiving that you have diminished your respect for them too.”

In another chapter, about “The Good Conversationalist,” the institute reminds us that “Looking into the other person’s eyes shows your interest in the conversation.”

In the beginning, Lawrence set the tone and the pace by answering the question that wasn’t asked. You can choose to be insulted or you can choose to be part of the party and wonder how you’d field the extra body part question. I would choose Peeta. 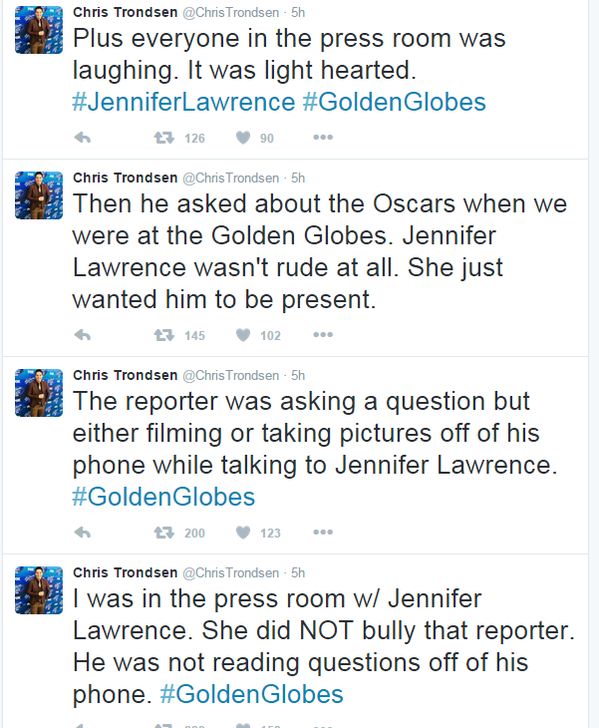