Getting antsy for amazement

As I approached the Festival Palais early this morning, a light breeze wafted down the fabric of the immense billboard-size banner of this year's festival poster over the facade. The glamorous photo of a leggy Faye Dunaway, by director Jerry Schatzberg from his 1970 film "Puzzle of a Downfall Child," was rippling and creasing in a way that made the sleek legs appear to be covered by a pair of ill-fitting tights. Little did I suspect that Faye's wardrobe malfunction was a bad omen for a seemingly promising day on which three out of the only four films by women selected for this year's Cannes competition were scheduled to screen. 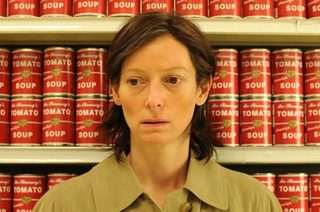 British actress Tilda Swinton, who gravitates to daring roles, plays Eva, a conflicted New York mother "We Need to Talk About Kevin" by Scottish director Lynne Ramsay, based on the novel by Lionel Shriver. Eva's son Kevin is portrayed as having a deep animosity toward his mother, virtually from the moment of his birth. As an infant, he shrieks hour after hour when alone with her. As he grows, he exhibits a fierce, focused inclination to evil, and that bent will ultimately make him a Columbine-style killer. Kevin might have been a demon child in another kind of movie, but this is not a supernatural story. "We Need to Talk About Kevin," is a psychological drama centered on Eva's guilt.

For me, this was a one-note film. Kevin is thoroughly bad; Eva is thoroughly angry, self-hating and stoic. I longed for some shades of subtlety, but this is a story that relies on blood-red coding in dreams and flashbacks, and a soundtrack that emphasizes grating irritants. Ramsay, who acquitted herself very well with films including "Ratcatcher" and "Movern Callar," seems an ill match for an American setting, letting raucous bluegrass numbers and stereotyped characterizations of Eva's small town neighbors and co-workers stand in for insight.

Judging from the text in the press kit, Australian novelist-turned-filmmaker Julia Leigh seemed to have everything lining up in her favor with her first film "Sleeping Beauty." Based on the unmade script, Filmmaker Magazine had named her one of "25 New Faces of Independent Cinema" back in 2008. She had director Jane Campion as a mentor, and her film was not only selected for the Cannes competition, but is a contender for the Camera d'Or, the prize for first or second feature. 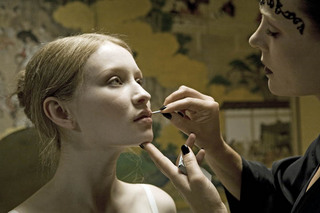 Leigh is by no means the first director to tackle a variation on the fairy tale, and not even the first female director to work with this theme. French filmmaker Catherine Breillat created her own unique "The Sleeping Beauty" in 2010. In plot, Leigh's adaptation closely resembles a little known 2006 German film, "The House of the Sleeping Beauties" by Vadim Glowna, which was based on a novella by Yasunari Kawabata. In both films, a student desperate for cash takes a job in a very private and pricey brothel catering to men of a certain age. The young woman agrees to be drugged into a deep sleep so that the clients may keep company with her unconscious body. She is assured that there will be no penetration, but pretty much anything else is allowed, from gentle caresses to a man stubbing out his cigarette on her neck.

Leigh's visuals call up many other references in this foray into transgressive territory. I was reminded of the stilted, antiseptic approach to erotic content of Atom Egoyan's "Speaking Parts," and of the fetishism, particularly with regard to production design, of Peter Greenaway's "The Cook, the Thief, His Wife, and Her Lover." Leigh's story is fleshed out with a host of details and circumstances that would in part explain the choices that her character Lucy makes--including a dependent alcoholic mother, and a dependent suicidal boyfriend--but the core of the story is the spectacle of a beautiful young woman being used and abused while unable to either participate or resist. 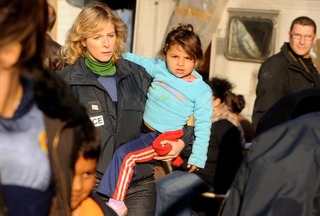 I subsequently pinned some hopes on "Poliss," a third competition film of the day, by French director/actress Maiwenn. It's a story of cops who work with the Child Protection Unit of the Paris police to investigate cases of child abuse. A low-key sensitively staged scene of a female cop interviewing a very small girl about the ways her daddy allegedly touched her opened the film. It was followed by a musical credit sequence so crass and obnoxious that it seemed lifted from a music video aimed at pre-teens.

On the whole, "Poliss" is a well-acted, well-crafted French-style equivalent of a couple episodes of "Law and Order: SVU." Police partners bicker and bond in the course of their work; the work takes its toll and families fall apart; and the stress drives some to personal extremes. Compelling stuff to watch for a couple hours of entertainment, but again, nothing I couldn't have seen on TV.

It's only the second day and I'm getting antsy for a film to amaze me, but tomorrow is another day.