Today at Sundance I wandered aimlessly around a supermarket picking up different cheeses and putting them back down. I can never decide on a brie.

Cheese-less I journeyed to a bustling main street (a very steep hill) where altitude-acclimated rich ladies breezed by me in furry hats and sunglasses. They were having a good time.

Having spent a terrifying night gasping for air in Cuajimoloyas, Mexico (10,000 ft. elevation), I rang Doctor Singla. "Doc, I need some altitude sickness meds" I said, but before she could reply the call disconnected.

Dejected on Main Street with only a tidbit of oxygen left in my lungs, I glanced up. There, between me and death, was a coffee shop.

Then I drank an Americano, met a spiritual wanderer and felt totally fine.

Then I saw some movies. 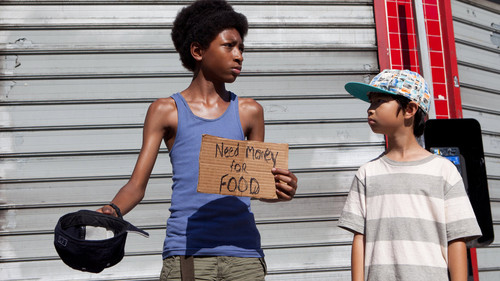 "The Inevitable Defeat of Mister and Peat" (U.S. Premiere) is about a Black and Asian friend duo and for obvious reasons this intrigued me. George Tillman Jr.'s film follows 14 year old Mister (Skylan Brooks) and 9 year old Pete (Ethan Dizon) as they struggle to survive following Mister's mother (Jennifer Hudson) arrest for drug use and prostitution.

The film has the feel of a comic book, with a cartoon-like sampling of characters in the neighborhood (the thug, the cop, the corner store owner etc) and I'm guessing from the humorous action-esque title that the storybook tone is deliberate. But while it enhances comedic moments, it prevents dramatic scenes from really taking root. I wanted to be shown less while discovering more on my own.

For example, Mister's mother has a habit of listening to a particular soul song while shooting up. We're introduced to this early on. In a later scene Pete sneaks into the apartment and hears the same song playing. He peers into the living room and sees Mister's mom splayed out in a post-heroin stupor, needle and spoon on the table. I wish the scene had cut immediately after Pete hears the music. The song is all we need to know, and once we know, we feel it.

The character of Pete is an interesting one and I'm curious to know how the character developed.  I like that the film centers on two Black and Korean friends as it's a highly unusual image in film and anything different is good. But I wonder why Pete  (a small, very quiet, very timid character) is Asian. If an ethnicity is used because it enhances the qualities of the particular character or affects their visibility in the story (the Black Sidekick's blackness fades him so the white star can shine), it's taking advantage of our existing unconscious racism. Since Asians have long been characterized as quiet and subservient, I wonder if an Asian actor was sought to more effectively convey Pete's fragility. I don't know if that's the case, but if so, it's unfortunate. We should be pointing out and destroying unconscious racism, not using it to our advantage.

And then there was "Soldate Jeannette" (World Dramatic Competition). If I don't see another good movie for the rest of the festival, Jeannette has made it worthwhile. A movie full of interesting female faces. Each one strikingly different from the next, each conveying a different sexual energy.

In Austrian director Daniel Hoesl's first feature, rich lady Fanni (Johanna Orsini-Rosenberg) leaves her rapidly crumbling materialistic life behind to heal her soul in nature's glory. She flees to mountains where she meets Anna, a girl working on a farm slaughtering cows. Anna sees no glory in farming and Fanni sees no glory in the material. Opposites attract and they help each other to freedom.

Though the plot is important, it's the least interesting part of the film, and that's a great thing. The best films have irrelevant narratives or none at all, and "Soldate Jeannette" happily shares this disdain for conventions. I have a special love for films that play games with the viewer (the Iguana cam in "Bad Lieutenant: Port of Call - New Orleans" comes to mind), and "Jeannette" enjoys itself immensely at our expense, toying with our expectations and pointing out our silliness for having any expectations at all. In particular, Hoesl's unusual use of pauses, a static camera, and a deliberate focus on inaction, reveal how strongly we're attached to a certain narrative rhythm. In one scene, quite unexpectedly, a cow is slaughtered. We see the bloody process from the very beginning to the very end. It is shocking, and I cried. I was totally unprepared, and that is great.

"Soldate Jeannette" has not only a sense of humor about its own graphic aesthetic (at moments reminiscent of Antonioni) but about filmmaking and cinema in general. In one scene Fanni is at the movies. Anna Karina is on screen in Godard's "Vivre Sa Vie." In the film Anna is at the movies too. Anna watches Falconetti on screen in Dreyer's "The Passion of Joan of Arc" ... and Fanni snores. She is asleep. She snores. And she snores. And then she snores again.

Orsini-Rosenberg's performance is brilliant and her wonderful face lends itself well to Fanni's languid disinterest. It is not a tight face, it can move. It has a small amount of age and with one tiny smirk can be beautifully unimpressed with life and secretly wounded. Orsini reminds me somewhat of Giulietta Masina, and as she uses her body expertly to comedic effect (in tights she has the energy of a pants-wearing woman), I'd like to see her in a slapstick someday.

This is Hoesl's first feature. Keep him in mind. He has the right idea.