Four screenings, from blues to bliss 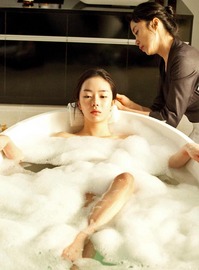 Walking down a narrow side street from my hotel to the Palais at 7:55 am every morning involves running a gauntlet of persistent petitioners, who appeal to those rushing to the 8:30 am press screenings for spare admission tickets. Press get in by showing their badges, but those whose accreditation is only through the film market sign up online for tickets, which they sometimes don't need. Spare tickets must float around frequently enough to justify cinephiles of all ages honing their approach techniques, from aggressive and confrontational to polite and needy. Some hold little handmade signs with the name of the day's film, and close in no matter how fast you walk or how diligently you avoid eye contact.

Today's first press screening was "Chongqing Blues" by Wang Xiaoshuai, whose previous films include "Drifters" and "Shanghai Dreams." Wang has been a frequent festival guest and occasional prize-winner at both Berlin and Cannes, just has his work has frequently riled authorities at home. "Chongqing Blues" is the story of a father seeking to know and understand his estranged son, months after the young man has been shot dead by police while holding a hostage in a mall. 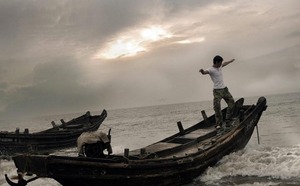 Lin, a merchant marine captain, arrives in the city of Chongqing after an absence of fifteen years, looking to see his ex-wife, the cop who shot his son, the victims he wounded or took hostage: in effect, anyone who could tell him something about the boy he last saw at the age of ten. Doors are repeatedly slammed in his face, but in the course of this dogged search, director Wang provides a haunting, grimly beautiful look at urban industrial China.

With Lin as the outsider looking in, Wang conveys a melancholy feeling for the fragmented, alienated family, portraying the imperfect ways people including his ex-wife settle to create the illusion of family. As "Chongqing Blues" reaches its mid-point, the narrative increasingly relies on flashback as the means of exposition, and those who had previously rebuffed Lin's questions suddenly talk up a storm. With all loose ends tied up, most questions answered, the film squanders its gritty poetry, becoming about as affecting as an average TV melodrama.

While this day of screenings had a so-so beginning, it got progressively better with each film. Next was Manoel de Oliveira's "The Strange Case of Angelica," the director's forty-ninth film, completed in his 101st year. De Oliveira films continue to astonish me with a paradoxical combination of old-fashioned formality and sprightly imagination, and with their remarkable feeling for architectural space and landscape.

"The Strange Case of Angelica" is delicate, playful and sly. Isaac, a young Jewish photographer newly arrived in a small Portuguese town, is pressed into service to take a portrait of the corpse of the daughter of the town's wealthiest family before her burial. He peers through the lens and sees an apparition meant for him alone: the beautiful young woman opens her eyes and smiles at him. 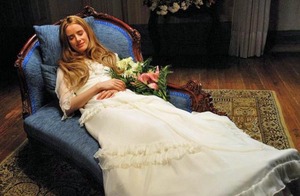 "The Strange Case of Angelica"

From that point, de Oliveira calls the spirit world into play, but in a way that continues to be largely grounded in Isaac's concrete reality. As he becomes distracted and obsessed in a way that worries the landlady of his boarding house, not a detail of the director's composition goes to waste. Three engineers engaged in a casual conversation about matter and anti-matter at the breakfast table turns out to have profound implications. A house cat intensely eyeing a caged finch is a mini-metaphor. The viewer's patience is rewarded with magic.

As always, I'm on the lookout for cat sightings in films and "The Strange Case of Angelica" provided this year's first contender for my just-pretend award, the Palm d'Whiskers. The unnamed grey tabby gave an alert performance in his dash out of the shadows to threaten a bird cage, eliciting a few inadvertent giggles from the audience.

Romanian Radu Muntean proved that he's a director coming into his own with today's premiere of "Tuesday, After Christmas." Like his slightly unsatisfying 2008 film "Boogie," which screened in the Directors Fortnight at Cannes, it's the story of a man trapped in a marriage. Unlike "Boogie," "Tuesday, After Christmas" is thoroughly gripping. Paul, the protagonist of "Tuesday," could be the character Boogie a decade later. Party-boy Boogie, looked for release from the responsibilities of wife and toddler, but Paul is a seemingly satisfied man in a marriage of ten years. Yet, for five months, Paul has been having an affair with his young daughter's 27-year-orthodontist.

In a director's statement, Muntean said, "Marital intimacy can be more captivating than a good action movie," and makes it come true. He shows us plenty of giddy intimacy of the sexual kind, between Paul and his lover Raluca, but the intimacy between Paul and his wife Adriana is matter-of-fact, taken for granted, profoundly painful, and eminently more engaging to watch.

Husband and wife are emotionally naked from beginning to end. Paul sits on a couch massaging his wife's feet. In this scene, except for her feet, Adriana is out of the frame literally and figuratively. Paul responds to her voice with the right words, and performs the right gestures on auto-pilot, while the worries and thoughts of his other involvement cross his face. Muntean gives us a feast of female nudity from the film's opening frame, then, he sets about proving that it's much more interesting to watch his characters with their clothes on.

Today's biggest treat, hands down, was Im Sang-soo's "The Housemaid," a remake of cult director Kim Ki-young' sizzling 1960 film of the same title. This could be another triumphant year for the Korean cinema at Cannes. "The Housemaid" is a twisty suspense movie that takes its time getting to its shocking, utterly surprising conclusion. Thanks to a tight script, evocative cinematography and production design, and a stunning cast, every minute along the way is enjoyable. 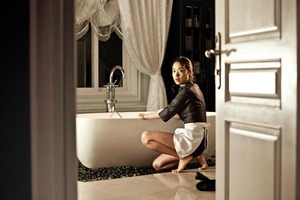 Eun (played by Jeon Do-youn, the Cannes Best Actress award winner for Im's 2007 film "Secret Sunshine") is pretty, young divorcee hired as a maid in the household of a super-wealthy couple. She has an innocent face that glows with pleasure when she even thinks about smiling. She begins her new job in the marble-floored mansion with a submissive spirit and endless cheer, although her duties range from being a nanny to hand-washing her mistress's lingerie, painting her toenails and massaging her pregnant belly.

Eun's immediate boss is the straight-laced housekeeper Byung (Youn Yuh-jung), a longtime family retainer who threateningly lords it over the naïve new maid, and maintains her power by making it her business to know everyone else's business. Byung is a manipulator, a snitch, and a bully, but in time, after Eun is willingly seduced by her cruelly self-centered master, she's the least of the adversaries that Eun needs to fear.

So much of the pleasure in watching "The Housemaid" comes from being surprised by the unexpected plot developments, and so I'm reluctant to reveal any more, except to say the every performance is a gem. If I were on the jury, I'd want to give both Jeon Do-youn and Youn Yuh-jung acting awards. I wouldn't be surprised if the "The Housemaid" gets picked up for U.S. distribution before the festival is over. Like last year's Korean Cannes sensations "Mother" and "Thirst," coming soon to a theater near you, I hope. 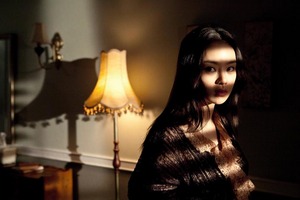