At film festivals, it can often feel like one is trying to draw parallels between movies that don’t really have them. We see thematic mirroring that isn’t really there due to festival exhaustion and a desire to link titles together in order to more easily write about them. And then you have a day like today, in which I saw three films in a row from different continents that undeniably shared structural and thematic DNA. All three movies fold time and reality in on each other, allowing the past to comment on the present, and vice versa, and forcing viewers to question if what they’re seeing is actually real or a byproduct of a character’s imagination. Sadly, only one of them works.

The best of the three by some stretch is Greg Zglinski’s “Animals,” a genre hybrid that examines the crumbling of a marriage through a confusing and sometimes terrifying lens. Anna (Birgit Minichmayr) is married to Nick (Philipp Hochmair), but he’s cheating on her with the pretty girl who lives upstairs named Andrea (Mona Petri). She’s struggling to write a novel; he is working on recipes as a professional chef—so they agree to take a vacation together, spending some time in the Alps in a vacation home. On the way there, they get into a car accident when they slam into a sheep in the middle of the road. From there, “Animals” branches off into what sometimes feels merely like the aftermath of an accident and the continued dissolution of a marriage, but something’s not quite right. Anna even starts to wonder if she’s actually in a coma because of the accident, especially after a stray cat starts talking to her. Meanwhile, a woman named Mischa (also played by Petri), who is housesitting for the couple, goes through her own cycle of oddity and confusion. People start to claim that she actually is Andrea, the woman who lived upstairs. And then it gets even more unusual.

“Animals” is a remarkably confident film, the kind of piece that could easily fall apart with even an iota of doubt reflected in the filmmaking. It is a strange, twisted tale, the entirety of which could possibly be a dream sequence. I usually don’t go for films that open to inconsistency, but Zglinski has a strong eye and works well with performers. It really feels like he’s saying something about how little we trust our spouses sometimes and how easily reality can be shattered in the blink of a sheep’s eye.

That confidence is missing from the other two films I saw today with similar reality-bending themes, both of which fall victim to their own self-seriousness, among other problems. Zglinski knows his concept is ridiculous, and so he’s playful with it, even verging on dark comedy. On the other end of the spectrum is Patrick Demers’ “Origami,” which made its world premiere here tonight. Demers’ film is so morose and tonally flat that it becomes torturous, and it falls victim to something that has always been a problem for this critic, the manipulative use of a child’s death as a plot point. If you’re going to kill a child in a film, you have to earn it and have it pay off in a rewarding way, or else it’s just cheap heartstring-pulling. That would be a kind way to describe “Origami.”

David (Francois Arnaud) is obsessed with Asian culture, and his travels lead him to the discovery of a latent gift within himself, an ability to travel through time. David’s daughter died recently, and the artist’s forgetfulness was the reason she passed way. Of course, he wants to learn how to master this new gift in order to go back and save the little girl he lost.

Or does he? At its infrequent best, “Origami” suggests that perhaps all of David’s experimentation is in his own head, and he’s merely a man completely broken by unimaginable tragedy. When Demers starts to go down this road—the idea that David was merely insane and not practicing techniques from “The Butterfly Effect”—the film almost comes together, but then he completely derails the entire project and mires the final act in unearned emotion. And don’t get me started on the only Asian character basically being The Guy Who Explains Time Travel. I never cared about what was happening to David—the character isn’t interesting, the plot is dull, and the movie is stunningly flat when it comes to actual emotion. 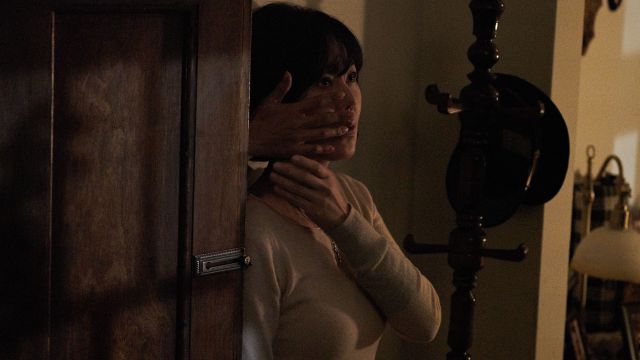 I had a similar response to the third film of this fifth day in Montreal, Dae-Woong Lim’s “House of the Disappeared,” which is a haunted house movie at its center but also a film about loss and sacrifice, not unlike “Origami.” The great Yunjin Kim of “LOST” fame stars as Mi-Hee, who we meet in the middle of a nightmare. She wakes up to find her husband in the basement, a knife protruding from his stomach. Her son stands frightened in the corner. Did he do it? What happened here? And then she watches her son disappear into a closet. The door slams. She opens it to find a brick wall. Mi-Hee goes away for the murder of her husband and presumed murder of her now-missing son. 25 years later, she comes back to the house to find that the ghosts of it have been waiting for her.

To call Lim’s film lugubrious would be an understatement. Poor Kim has to walk the halls of this creepy house, one that we all know is deeply haunted, and her current situation is intercut with flashbacks that detail how we got to that fateful night. None of it is stylish enough or interesting enough on a narrative level to engage with the viewer. It’s a mystery that one is never eager to solve; a haunting in which the ghosts aren’t really scary. It’s just a flat film in many ways, one that feels like it’s going through the motions over and over again. Like all of today’s protagonists, it feels stuck in time, unable to break its bad habits.