Below is a transcript of my discussion with longtime Ebertfest attendee and friend of the festival, Kim Robeson. She’s a wonderfully kind human being and has plenty of stories and memories to share. We hope you enjoy them below.

How long have you been attending Ebertfest?

What drew you to Ebertfest?

My parents received an invite to the first opening reception at the Country Club.

I had no idea what it was, but being a film fan, I thought it looked interesting, so I went. Little did I know the huge effect it would have on my life.

At the reception I hung out with high school friend, Jason Rotzoll (son of Kim Rotzoll, Dean of the College of Communications at the time, who was instrumental in the festival).

Jason was volunteering and 'hosting' Stephen Lisberger, the Director of Tron. I hung out with them during the festival and decided this was something different, exciting and cool.

Sign me up. Since then, I have been to every festival, hosted for many, and my family is a sponsor.

Do you have any personal stories about Roger?

I remember late night get togethers at the Steak 'n Shake. Tables lined with visiting actors, directors and producers from around the world sharing a chili mac.

One of the first years we were sitting there late night and a small group of local high school thespians were there.

They were celebrating after a performance or practice and lined the windows, looking inside, waving enthusiastically at the lineup.

They all crowded in and gave an impromptu tableside performance which was appreciated with enthusiastic applause by Roger and friends.

In the early years, there was nowhere for guests to congregate after the films were finished and the bars were closed.

I lived in a small apartment in a church alley in Downtown Champaign. Seeing there was a need, we all marched down the alley to my apartment, and while my boyfriend held the crowd at bay, I ran in to frantically clear my apartment of clutter. Then everyone piled in. 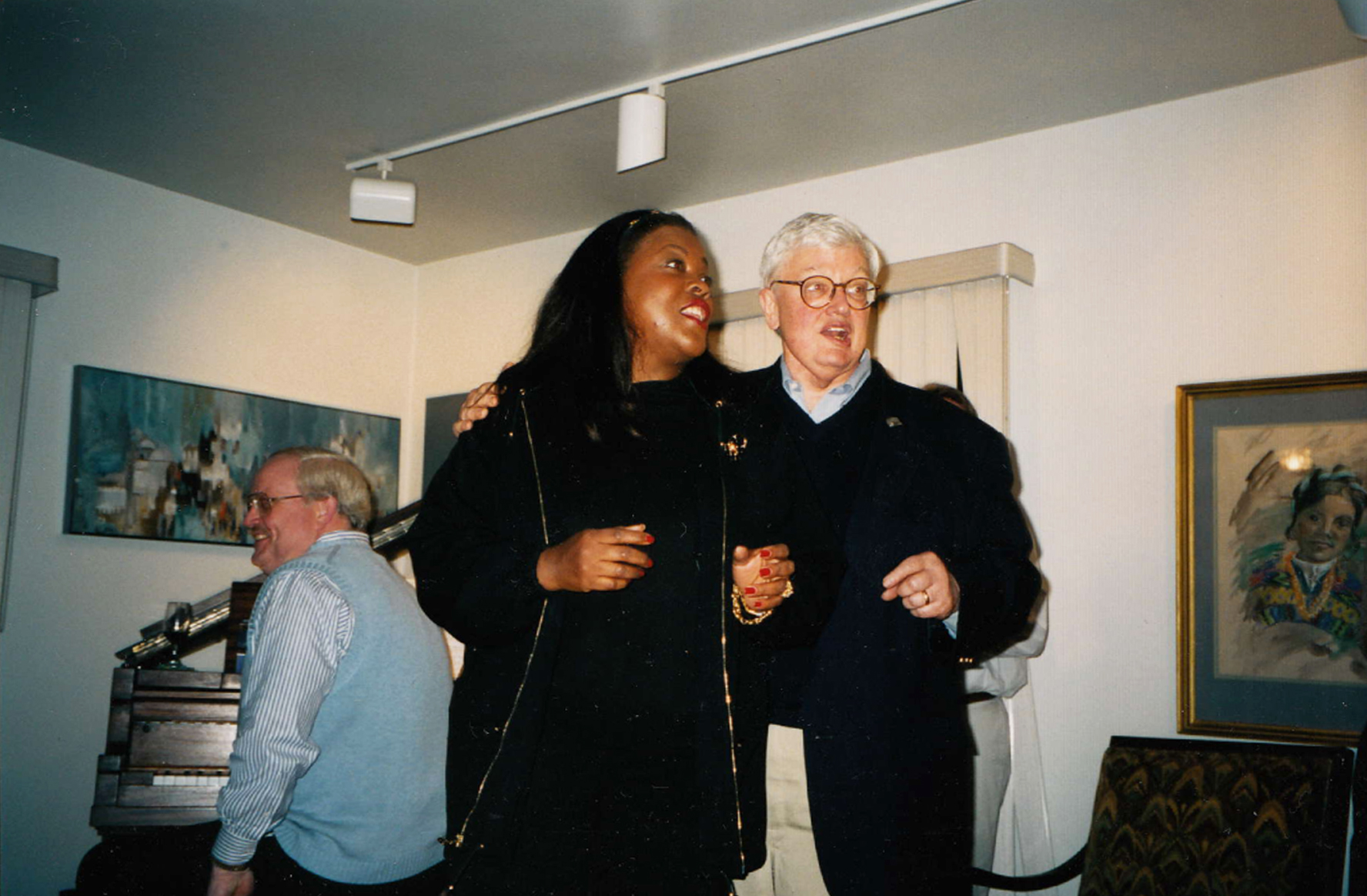 Later a Wrap Up Party was organized. In one of the early years at the party, Roger and Chaz spontaneously performed a sweet and silly song and dance number for everyone, accompanied by the piano. It is also one of my highlights. Didn't know they had such talents.

In the theater, with a smile and twinkle in his eye, Roger would come out on stage yearly and quote "Beyond the Valley of the Dolls" (in which Roger was a writer) saying, "This is my happening and it freaks me out!"

When he received a token of some kind, he liked to quote the Australian film, "The Castle" by saying, "This is going straight to the Pool Room."

He had such great interviewing skills. And such a connection and warmth with the audience as well

Tell me about your job as a host for special guests at Ebertfest.

I was a host for many years for Ebertfest. I have hosted Billy Crudup and Robert Forster.

Sitting in a booth at the Brass Rail (a little hole in the wall bar), Billy Crudup was looking out the door and saw Mark Borchardt from "American Movie" lumbering by.

Billy got so excited and jumped up, ran out of the bar and chasing him. "Take my picture with him!" and I did. 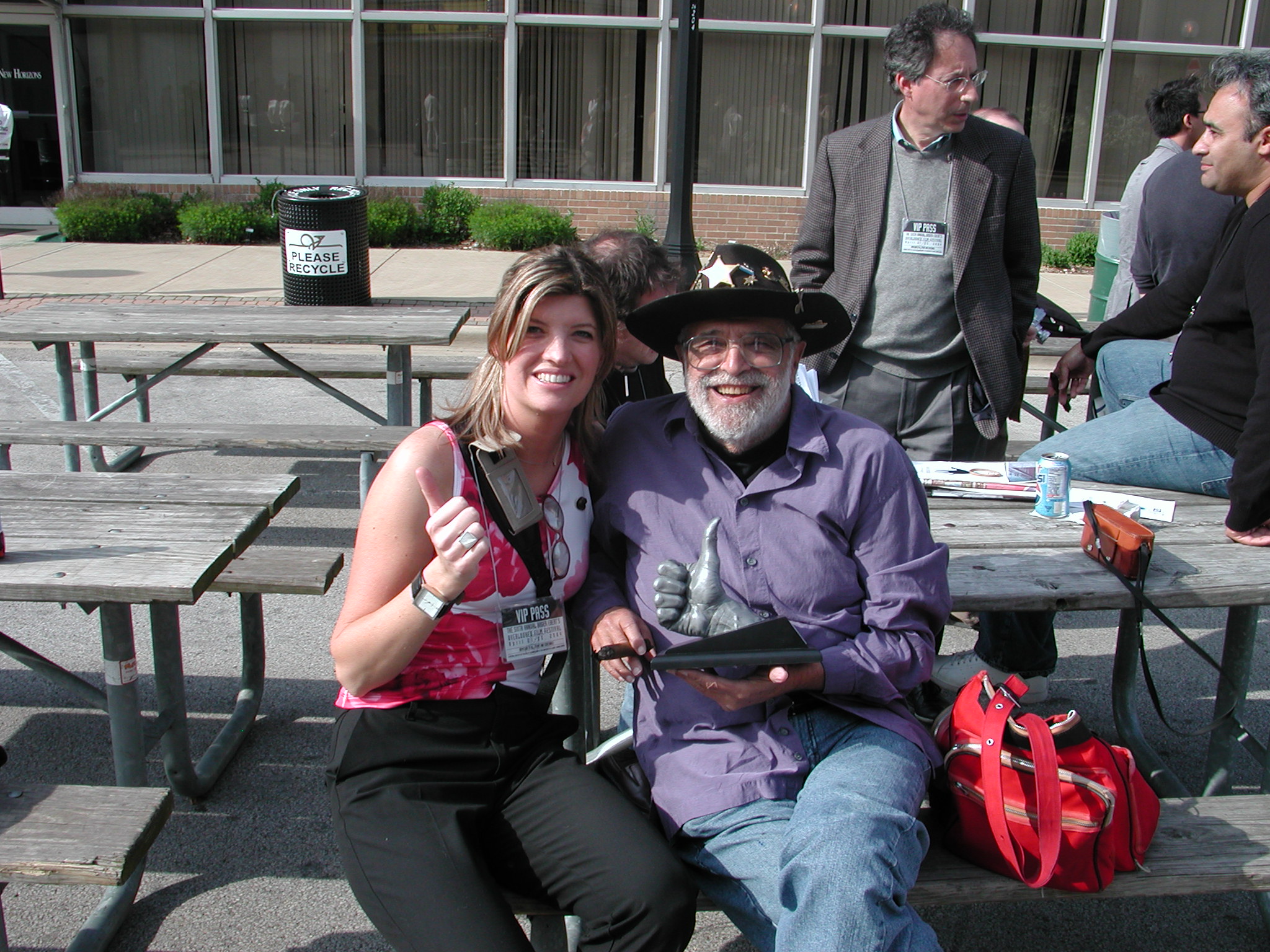 For most years I hosted Dusty and Joan Cohl, founders of the Toronto Film Festival and good friends to Roger and Chaz.

Being host to Dusty and Joan was quite an experience and allowed me to meet so many people and have so many experiences in life that I would not have had otherwise.

Like, I know John Sayles does not like broccoli. Actors, directors, producers, and filmgoers would flock to Dusty and his black hat. They were a force.

Whether it be Dusty holding court at the Illini Union every morning, a chat in Westside Park, on picnic tables outside the theater, or in a local establishments.

I found myself arranging dinners and lunches and they always wanted me at their side. Dusty and I would race over to Steak 'n Shake to move all of the tables together for the late night feast.

Dusty and Joan always wanted to experience something in our community, going to a high school musical, etc. Joan was always singing and carried a kazoo in her purse if needed.

What's your favorite film you've seen at Ebertfest this year?

Unfortunately I wasn't able to go to all of the films, but I thought that "Life Itself" was my favorite this year. It was well made, touching, entertaining and just the perfect place and time to show it.

It was so personal for the "Ebertfest family."  He is so admired and embraced by this community for how much he has given back to it.

And that he decided to hold this festival here in his hometown means a lot. You could really feel the emotions and electricity in the audience. Lots of laughs, tears, cheers and thumbs up's!

What a beautiful portrait of love and a story of two courageous, strong people. You can only hope that you could be so fortunate, and have someone so strong in your corner when you need it.

And to end the Q & A with Bill Knack reciting the last page of The Great Gatsby (as he did at their wedding) was fabulous. Kim was kind enough to send along a few more photos she had stowed away from past Ebertfests. 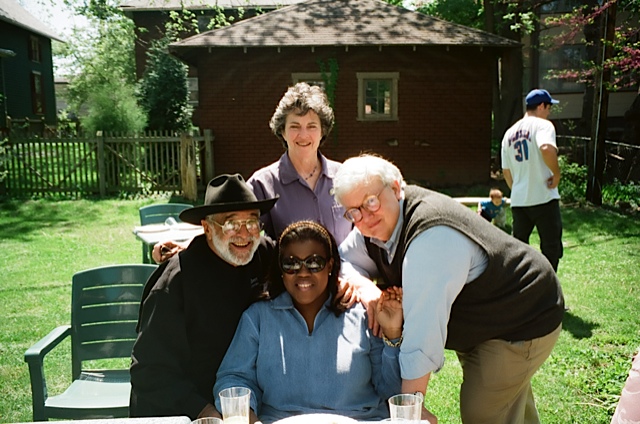 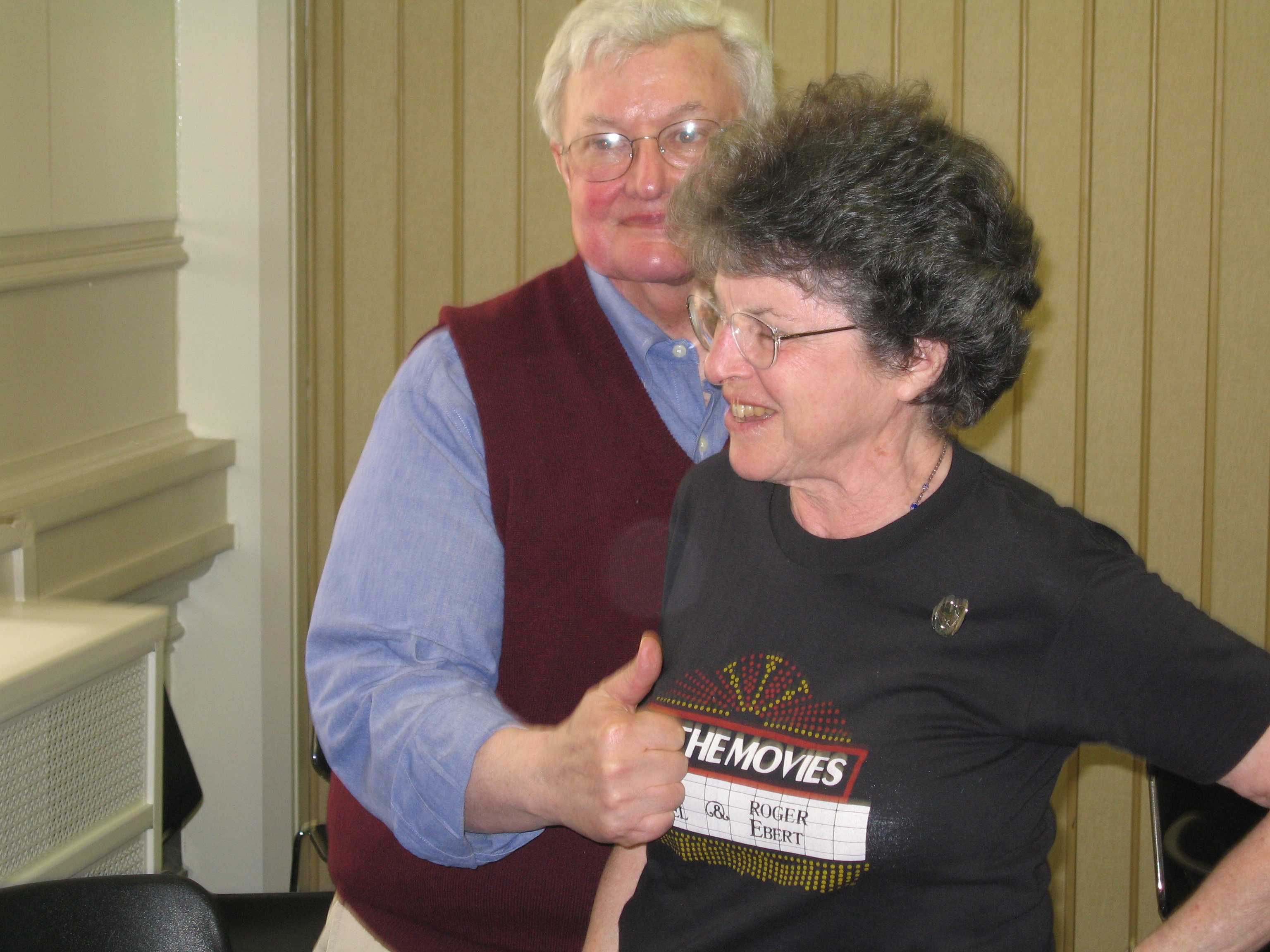 Roger covers up the Siskel part of Joan Cohl's "At the Movies" t-shirt. 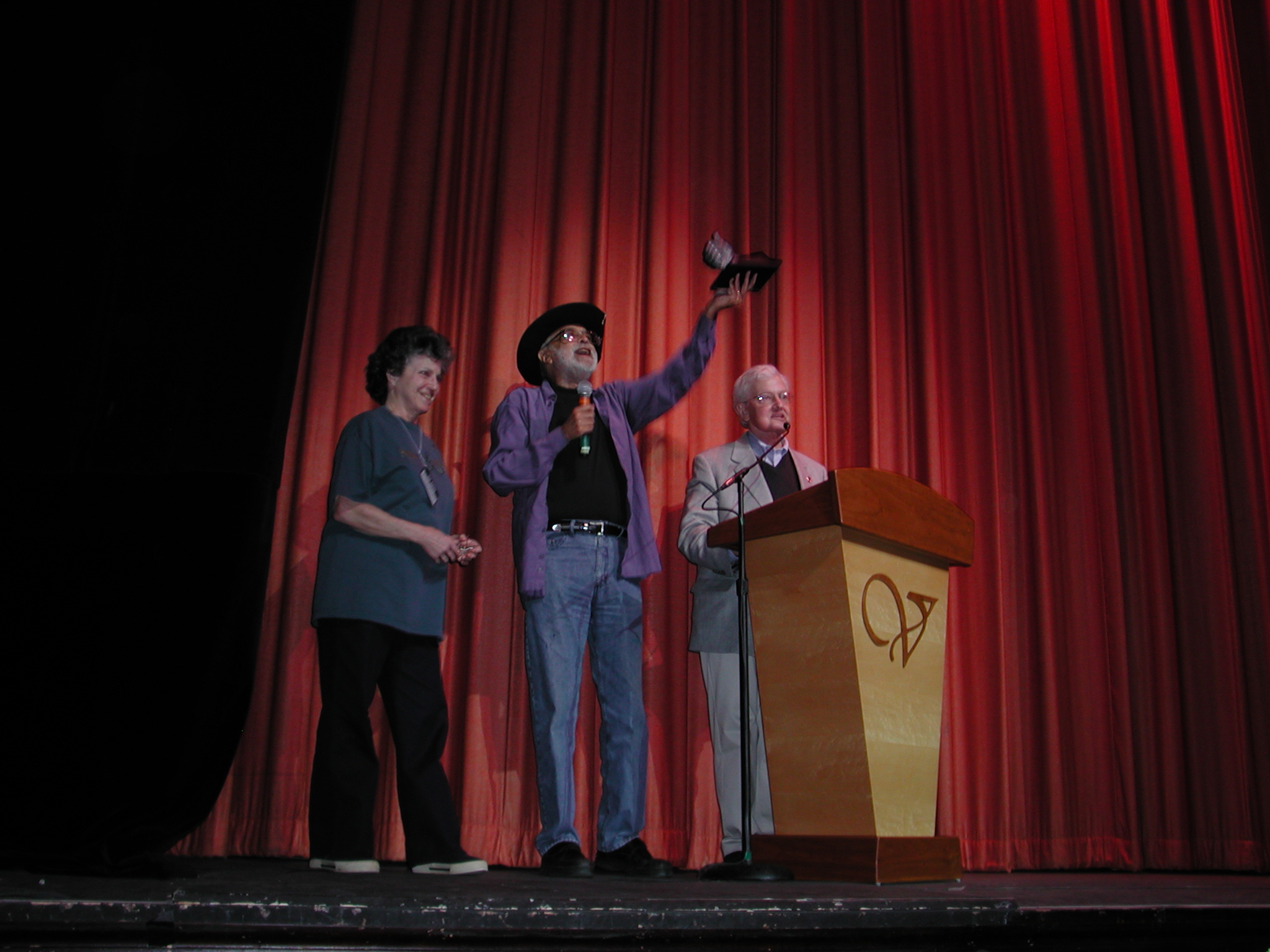 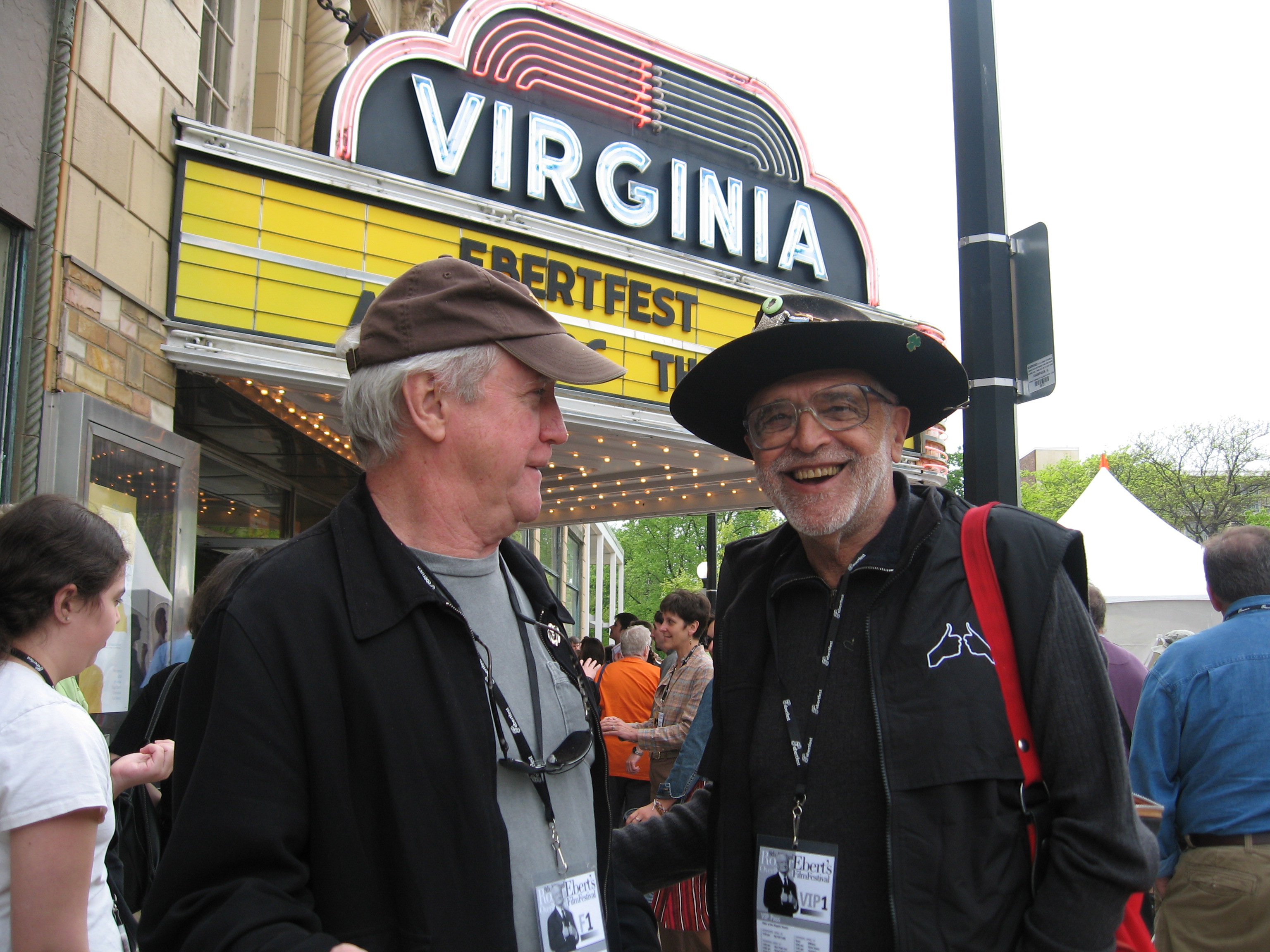 Dusty Cohl and Scott Wilson outside the Virginia theater.