Dispatch from Ebertfest: Goodbye to Understanding with Jean-Luc Godard

This year’s Opening Night film, Jean-Luc Godard’s "Goodbye to Language," is a towering achievement in something. It’s unclear exactly what that “something” is, and perhaps it’s ultimately irrelevant. Godard appears uninterested in providing clear explanations. He thrives on intoxicating 3-D mystery. For 73 minutes, a master in cinema is asking us to stop what we’re doing, and how we’re doing it. Put down the brightly-lit screens competing for our attention every second of every day. Forget about the way you’ve watched movies in the past. Disregard basic cinematic grammar. Stop searching for themes and blinding revelations. Just give in, or don’t.

To describe the plot of "Goodbye to Language" would be an exercise in futility. Like "Seinfeld," it’s about absolutely nothing, and also, possibly, everything. The IMDB logline suggests a simple, familiar cinematic experience:

The idea is simple: A married woman and a single man meet. They love, they argue, fists fly. A dog strays between town and country.

It’s true, there are plenty of shots of the aforementioned dog aimlessly ambling. And yes, there are two adults who engage in a clandestine love affair. But Godard’s script is filled with more statements than dialogue. Characters speak aloud without often addressing one another, as if trapped in their own soundless bubble. When we’re not watching these characters falling in and out of love, conversations veer into everything from the militaristic acumen of Hitler to authorship to atomic bombs.

The topic of gender equality is intelligently discussed as a naked woman stands before her equally naked lover, who happens to be sitting on the toilet taking a poop, redefining what it is to be original forever. This is simply the latest provocative experiment in Godard’s boundary-pushing career. 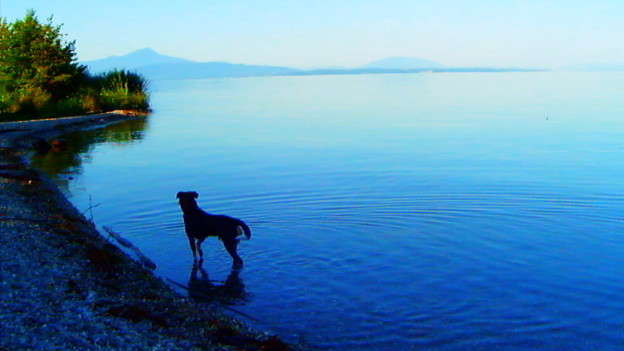 As the lights came up in the Virginia Theater, the disparate murmurs grew louder and louder, until morphing into intelligible responses. There wasn’t a wide variety in these knee-jerk reactions. “What was that?” and “That was interesting” and my personal favorite, from my father, “Did you like that?”

Even Chaz Ebert, before strutting off stage, couldn’t help but ask, “What did the movie mean?”

Héloïse Godet, a lead actress in the film, comically remarked, “I was in it, and I don’t know either.”

If Ms. Godet, who spent months intimately working on the project with Godard doesn’t know, it’s unlikely that I will unearth a satisfactory answer here. However, the universality of the audience’s vexing responses reminds me of Roger’s review of "Cries and Whispers." Of the Ingmar Bergman “Great Movie” he wrote:

It envelops us in a red membrane of passion and fear, and in some way that I do not fully understand it employs taboos and ancient superstitions to make its effect.

To not only admit, but accept confusion is difficult to do. We want to understand what we’re watching, and if we can’t, we blame the filmmaker. Film, especially these days, seems to so rarely challenge our intellect that when we’re faced with a daunting and sprawling film like "Goodbye to Language," our default setting it to respond with negativity, doubly so when Godard seems to be gleefully toying with his audience. The audio will occasionally cut in and out, creating a sonically assaultive experience. Images are layered on top of other images, often rendering the picture imperceptible. When a line like, “Everyone will need a translator to understand what’s coming from our own mouth” is delivered late in the film, it’s hard not to think of this as a self-referential moment for the groundbreaking director.

I don’t know what precisely Godard is saying with "Goodbye to Language," but I’m eager to continue listening.